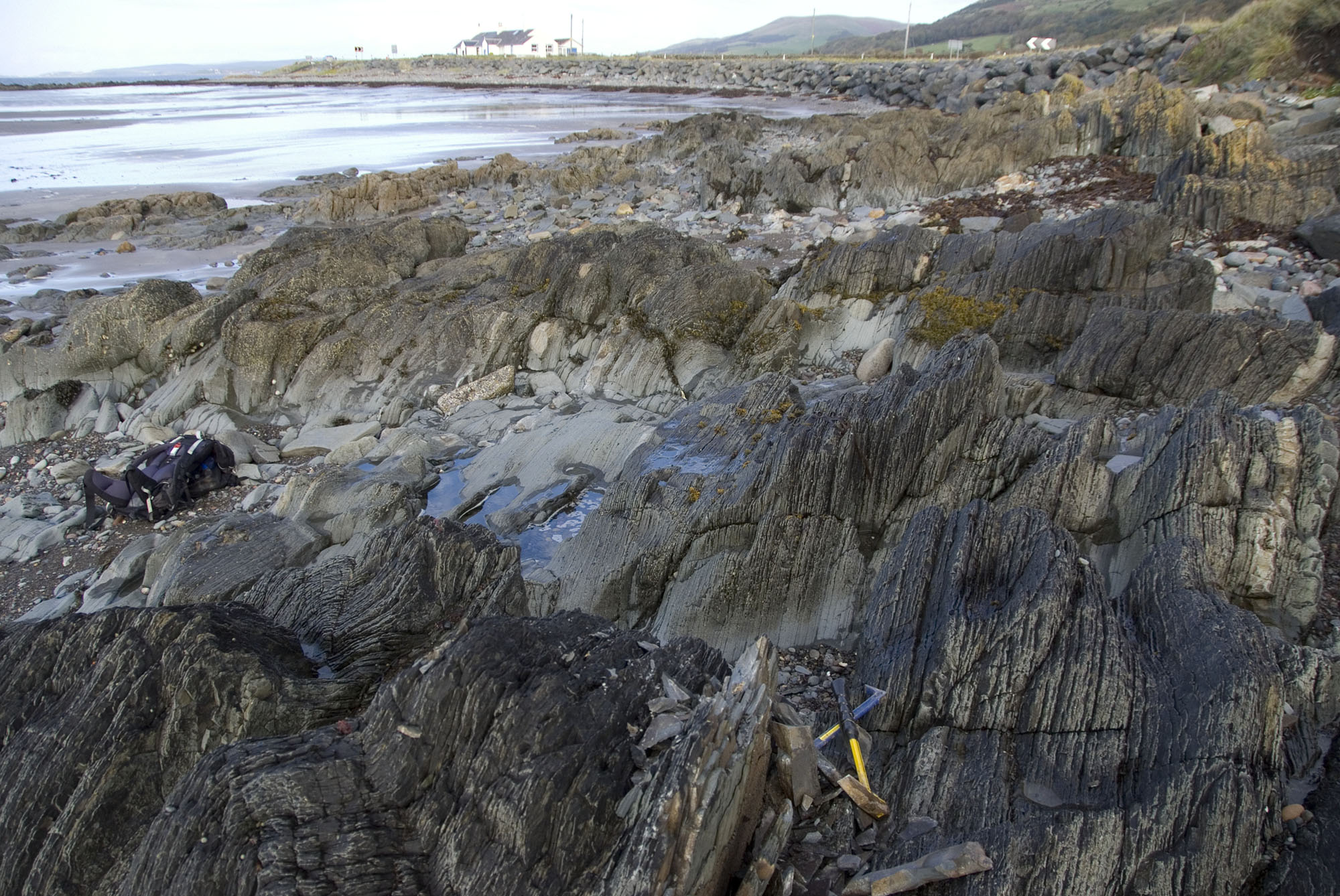 Ardwell Bay, south of Girvan, is the best coastal location in the area for finding fossils. Graptolites are the most common, with orthocone fragments and trilobites also being quite common. In addition, brachiopods can be found. The rocks you need to split are easy to identify, being black when weathered.

♦ Ardwell Bay is along the A77, south of Girvan.
♦ Just round a sharp bend, you will see some houses, one of which is called ‘Ardwell House’. You can park just after this or just before it in the small lay-by along the A77.
♦ You can gain easy access to the shore and you will see the flaggy rocks almost immediately at the south end of the bay. Look for the rocks that are folded into a series of cascade folds and that appear very black or dark grey
♦ Ref: 55.20455°N, 4.89966°W

FIND FREQUENCY: ♦♦♦♦ – The rocks at Ardwell Bay are full of fossils, the most common being graptolites, which are black. You will need to split the rocks to find the fossils, but they are easy to identify.
CHILDREN: ♦♦♦♦ – The rocky foreshore makes this location only suitable for older children. Since you need to split rocks to find fossils, an adult should help, and children should only help to search in the resultant debris from the split rock
ACCESS: ♦♦♦♦ – There is plenty of parking along the A77. You can either park just before the houses at Ardwell or just after them in the small lay-bys. You need to search the rocks at the southern end of Ardwell Bay.
TYPE: – Fossils are found in the flaggy beds exposed on the foreshore. Most of these are vertical and so can easily be split. The fossiliferous rocks are crumpled into a series of cascading folds and appear black from a distance and when weathered.

From a distance, at the southern end of the bay at Ardwell, the rocks appear black. On closer inspection, they look almost char grilled. The black rocks are actually from the Ardwell Formation, which have been weathered.

Even if you cannot find these rocks (because, for instance, they are wet), the second clue is the position of these rocks. They are vertical with cascading folds (see below). Therefore, it should be easy to find them and, once you have, all you need is a hammer, safety glasses and a chisel, or a pointed pry bar to start splitting. Although they are hard rocks, the shale is fine layered, so it should be easy once you get going.

The most common finds are graptolites. Most of the rocks contain these, but other beds can yield orthocone fragments, brachiopods and, if you are lucky, trilobites. Generally, the fossils are in the same rock type, so if you find one orthocone fragment, there should be many more in that same rock.

On the foreshore at Ardwell shore, fine flaggy sandstones, with dark greenish grey siltstones and silty mudstones with sandstone laminae, can be seen. Some of these beds are fairly thin, containing lenses of coarse sandstones and pebble conglomerates.

The strata are crumpled into a series of cascade folds. The rock appears black when weathered and belongs to the Ardwell Farm Formation, of the Ardwell Subgroup (part of the Ardmillian Group) from the Ordovician (Caradoc Series in age), and are about 450 million years old. This formation is up to 1,000m thick at Ardwell Bay.

Ardwell Bay is usually a fairly safe area. Although the tide does reach the small embankment, this can easily be climbed and it is not possible to be cut off. However, the rocks can be quite hard, so care should be taken when using sharp tools to avoid splinters

A hammer and splitting chisel is essential, together with safety glasses. However, the best tool is an Estwing Pointed Pry Bar. This will make work very easy and you can find fossils quickly using this excellent tool.