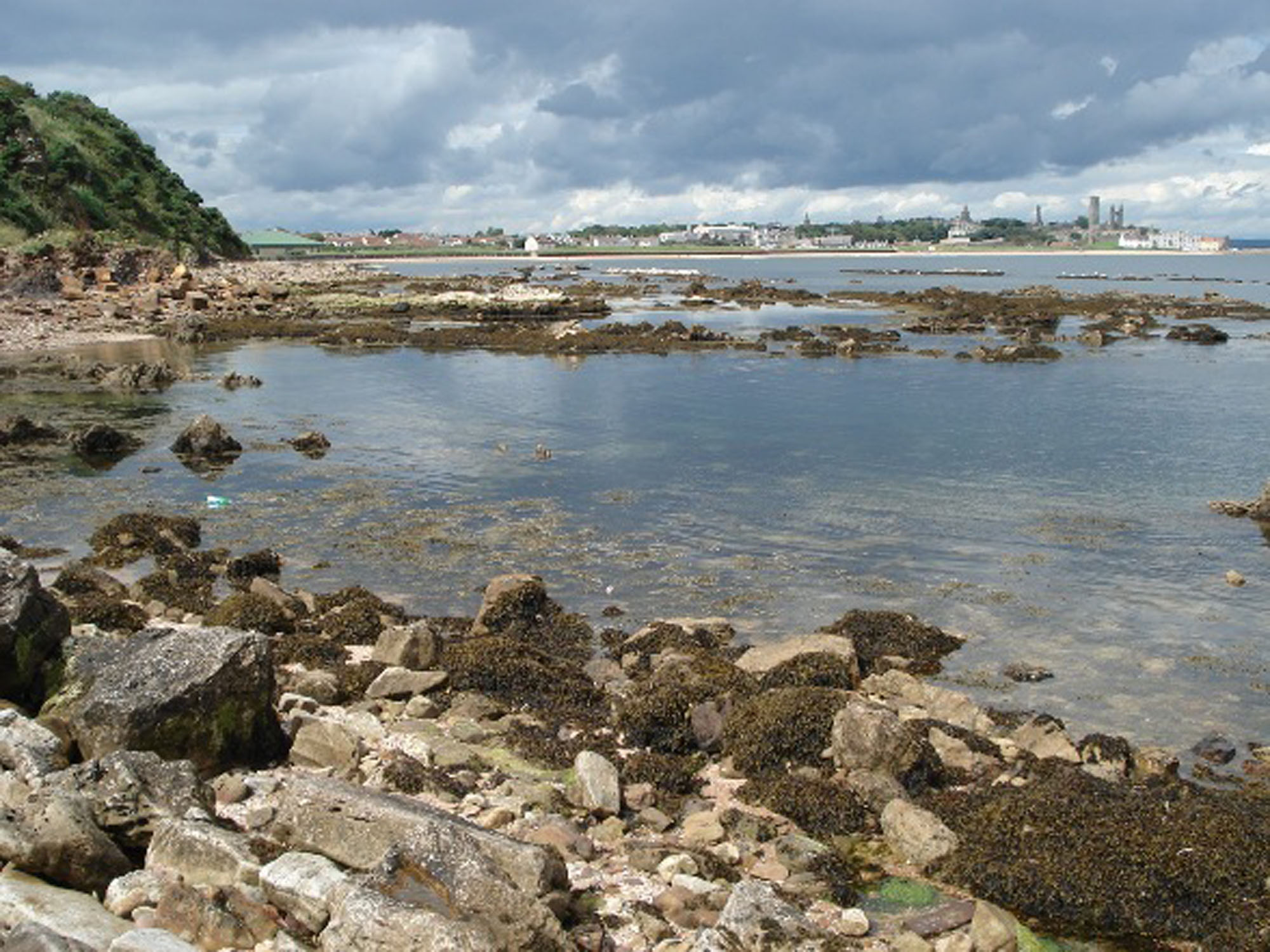 This is another location along this stretch of coastline where Carboniferous plant fossils can be found. The site is not as rich as others, but is still worth a visit.

♦ From the A917 (St Mary’s Street), take the turning towards East Sands into Woodburn Place.
♦ At the end of the road, you will come to a car park. Park here.
♦ Walk along or behind the sandy beach towards where it becomes rocky, with tilting strata exposed. This is the start of the fossil hunting area.
♦ Ref: 56.33621°N, 2.78197°W

FIND FREQUENCY: ♦♦♦ – Plant remains and bivalves can be found here. In fact, various plant fossils can be found in situ and also in loose pebbles. Rocks containing abundant bivalves are also present, but uncommon.
CHILDREN: ♦♦♦♦ – There are no significant obstacles or risks at this site and, as such, it is suitable for the whole family.
ACCESS: ♦♦♦♦ – The location is close to a car park and the beach is easy to negotiate.
TYPE: – Fossils can be seen in the exposed rock layers of the foreshore. They can also be picked up as loose pebbles or extracted from larger rocks.

Fossils can be found in loose pebbles or observed in situ within the exposed rock strata. Plant fossils are the most common, with examples of Stigmaria being fairly abundant. Some red coloured rocks are packed with bivalve fossils, but these are rare.

The sedimentary rocks at St. Andrews were deposited in early Carboniferous times (about 340 – 325 million years ago), and include mudstones, siltstones, dolomitic limestones, seat earths and coals deposited in just south of the equator in tropical latitudes. Plant fossils and trace fossils are common and non-marine bivalves are present. Occasional incursions of the sea left beds rich in marine bivalves, crinoids, brachiopods and bryozoa. Folds (synclines, anticlines and domes) and faults are clearly visible, demonstrating complex deformation in the late Carboniferous or early Permian age.

Features of basaltic volcanism are well displayed here, particularly at the Kinkell Ness Neck that includes a famous sea stack, the Rock and Spindle. Here there are thick-bedded tuffs which fell into the vent when the volcano collapsed in on itself; basalt intrusions; numerous xenoliths; explosion breccia; and pale igneous rock called white trap. The igneous rocks are of late Carboniferous – early Permian age, of around 290 million years old.

North west of St Andrews the rocks are composed of the Anstruther Formation from the Strathclyde Group, formed 331 to 335 Mya. Rocks are mudstone, siltstone and sandstone in thin cycles with thin beds of limestone, dolomite and coal and are predominantly non-marine in origin.

The Pittenweem Formation crops out north of the town and lies on top of the Sandy Craig Formation. It comprises Asbian aged rocks of mudstone and siltstone, with thin beds of limestone and dolomite; sandstone is subordinate. It is part of the Strathclyde Group

To the east of the cathedral, the Sandy Craig Formation is exposed. This was formed 326 to 335 Mya and consists of mudstone and siltstone with thin beds of non-marine limestone and dolomite; sandstone is subordinate. Rocks are Carboniferous aged (Asbian) from the Strathclyde Group

This is a family friendly location, beginning at a popular sandy beach. From the beach, a more rocky stretch of coastline can be investigated for fossils. In places, this is uneven underfoot and also slippery where algae covers the rocks. It is also possible to get cut off here, so only collect on a falling tide. Remember to take a mobile phone with you, and always tell someone where you are going and what time you expect to return.

Most fossils can be found by searching the rocks on the foreshore. You may need a hammer and safety glasses to split the larger boulders, but most of the work is done simply by beachcombing.