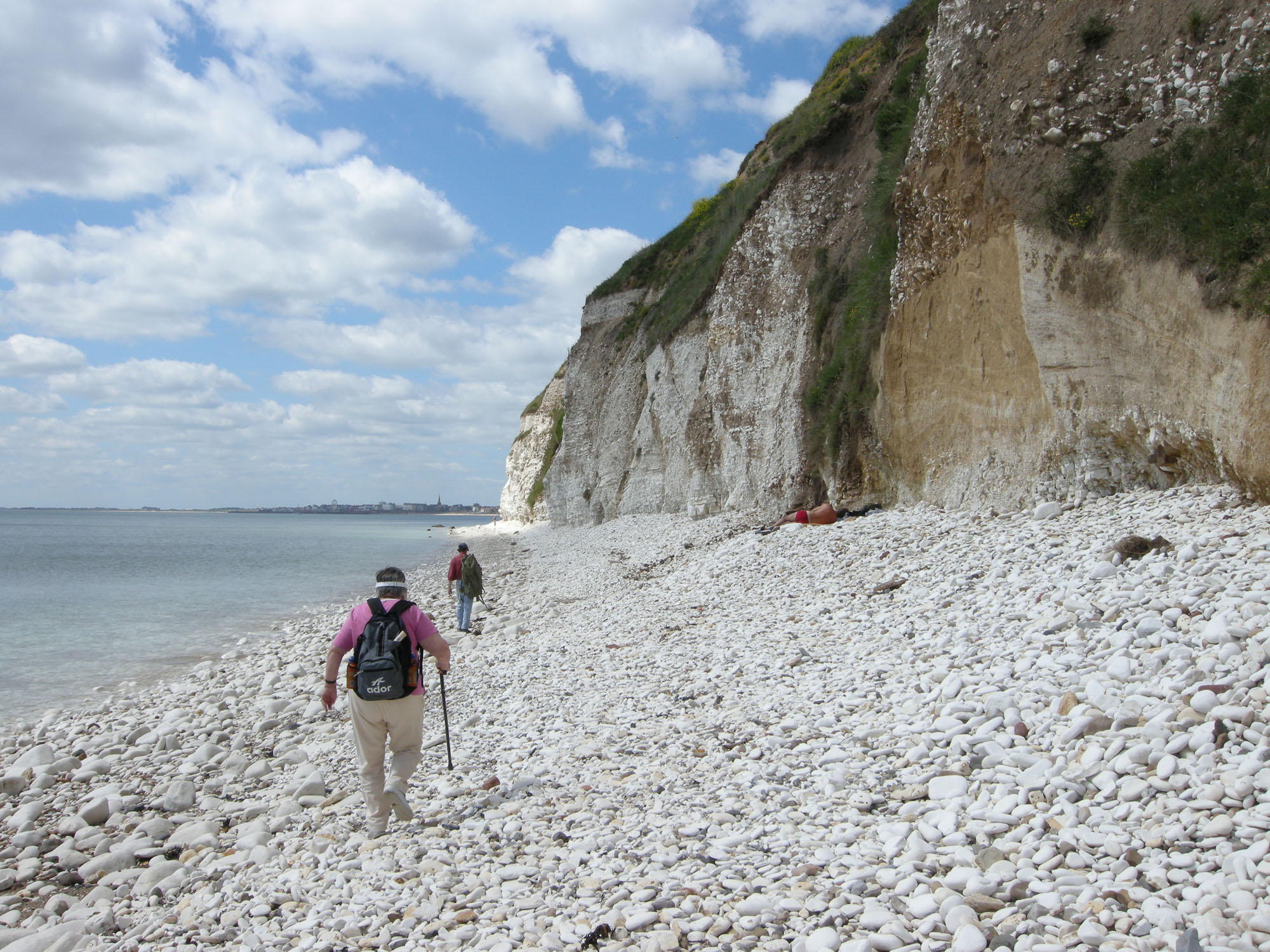 Famous for its many species of sponges, Danes Dyke is a must go location for anyone into chalk fossils. In fact, this is the best location in the UK for sponges. Echinoids, bivalves, brachiopods and crinoids can all be found too.

♦ To get to Danes Dyke, take the B1265 from Bridlington to Flamborough. There is a dip in the road as it goes into a wooded valley. Turn right at the bottom of the dip (which is easy to miss) and drive to the car park. A one-way system exists.
♦ At the car park, there is a cafe and toilets, although the cafe is not always open. There are also some lovely walks nearby, including one through a wooded area.
♦ Once you are on the shore, walk to the west. This is where the best fossils are found, although you can also find fossils to the east.
♦ Ref: 54.10431°N, 0.14204°W

FIND FREQUENCY: ♦♦♦♦♦ -Danes Dyke is a location that is highly productive in fossils. It is famous for its chalk, which is rich in sponges and echinoids. The soft chalk also makes collecting easy. The beds become older (and harder) at both the eastern (Flamborough Head) and western ends of the bay.
CHILDREN: ♦♦♦♦♦ -This location is suitable for family trips and children, but ensure that children keep away from the base of the cliff.
ACCESS: ♦♦♦♦ – There is an excellent car park with toilets, a cafe and so on, and a very short walk to the beach. There are also excellent walks through the wood near the car park and even picnic tables.
TYPE: -Most fossils are found in the fallen chalk boulders on the foreshore, but fossils can also be found in the cliff. However, we do not recommend collecting from near the cliff, as it is too dangerous.

Danes Dyke is the most easily worked chalk in the whole of Yorkshire. It is also the richest in fossils. The fantastic sponge beds are full of good condition sponges and there is a huge variety of these to be found. Various shells, echinoids and belemnites are also common, along with crinoids including the complete cups.

The best fossils are found by searching the boulders on the foreshore. It is also a good idea to try to split a few of these up, as the sponges are best clean and unweathered, and the best specimens are not on view. Sponges can also be seen in the sides of boulders and the cliff, and the chalk is nice and soft, so it is fairly easy to get these out.

Echinoids can usually be collected by simply searching on the foreshore, and their spines and crinoid plates can also be found in the same way in loose rocks.

The chalk at Danes Dyke is from the White Chalk Subgroup from the Campanian stage of the Cretaceous. It is part of the Flamborough Chalk Formation, and all three members (the South Landing Member, Danes Dyke Member and Sewerby Member) are present. The chalk is white, well-bedded and flint-free, with common marl seams (typically about one every metre). There are common stylolitic surfaces and pyrite nodules. The formation is up to about 265m thick (onshore). 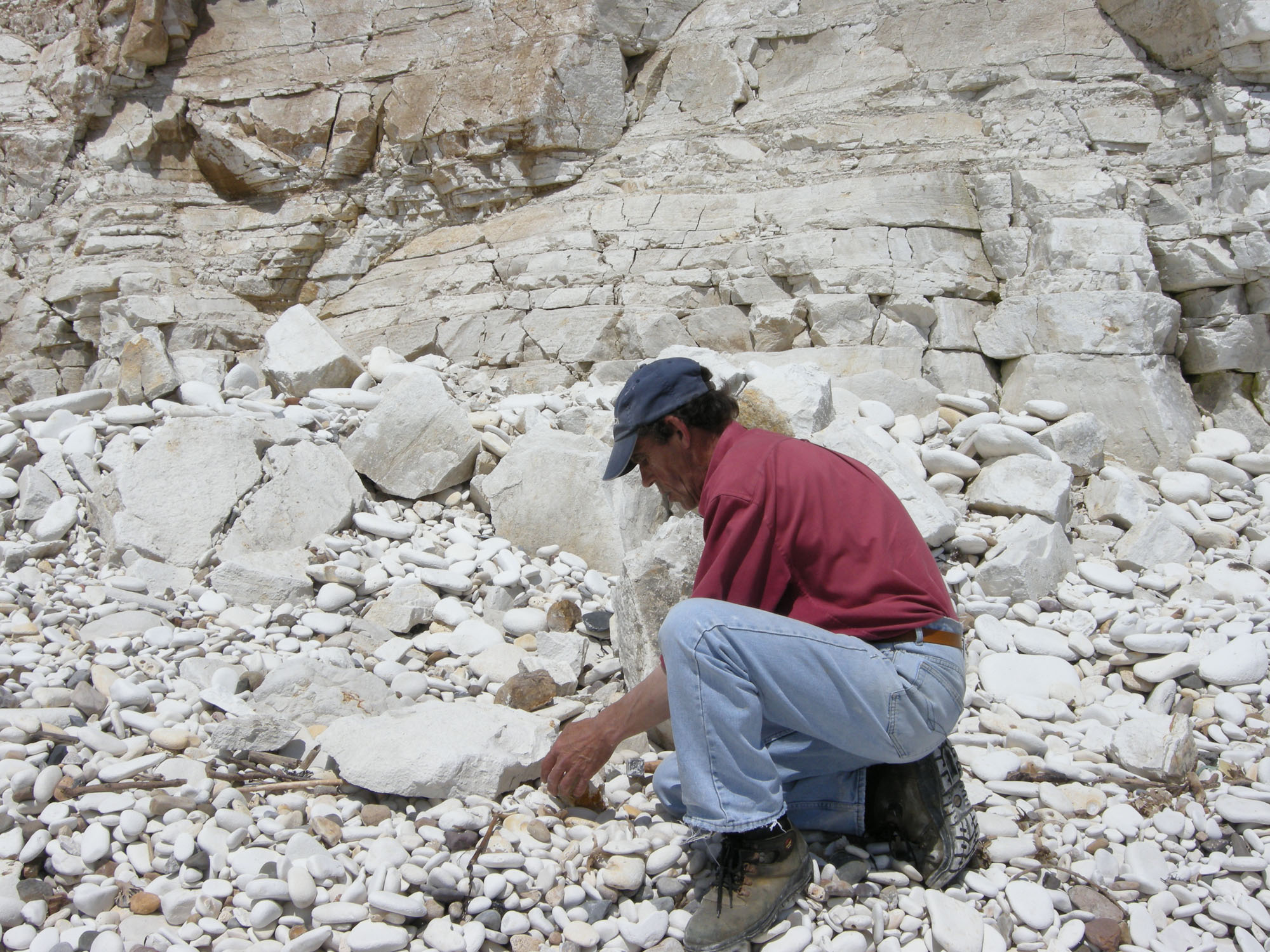 Common sense when collecting at all locations should be used and knowledge of tide times is essential. The tidal conditions at this part of the coastline can be very dangerous, so make sure you return before the tide turns. The cliffs are quite high and it is important to keep away from their base, as rocks often fall.

A hammer, chisel and eye protection are required at this location. Suitable footwear should also be worn. Fossils should be wrapped well and placed carefully into containers. It may be best also to take preserving liquid to preserve fossils such as the fantastic corals that can be found. A pry bar may also come in handy for prying open rocks with natural cracks and a lump hammer for breaking rocks apart.