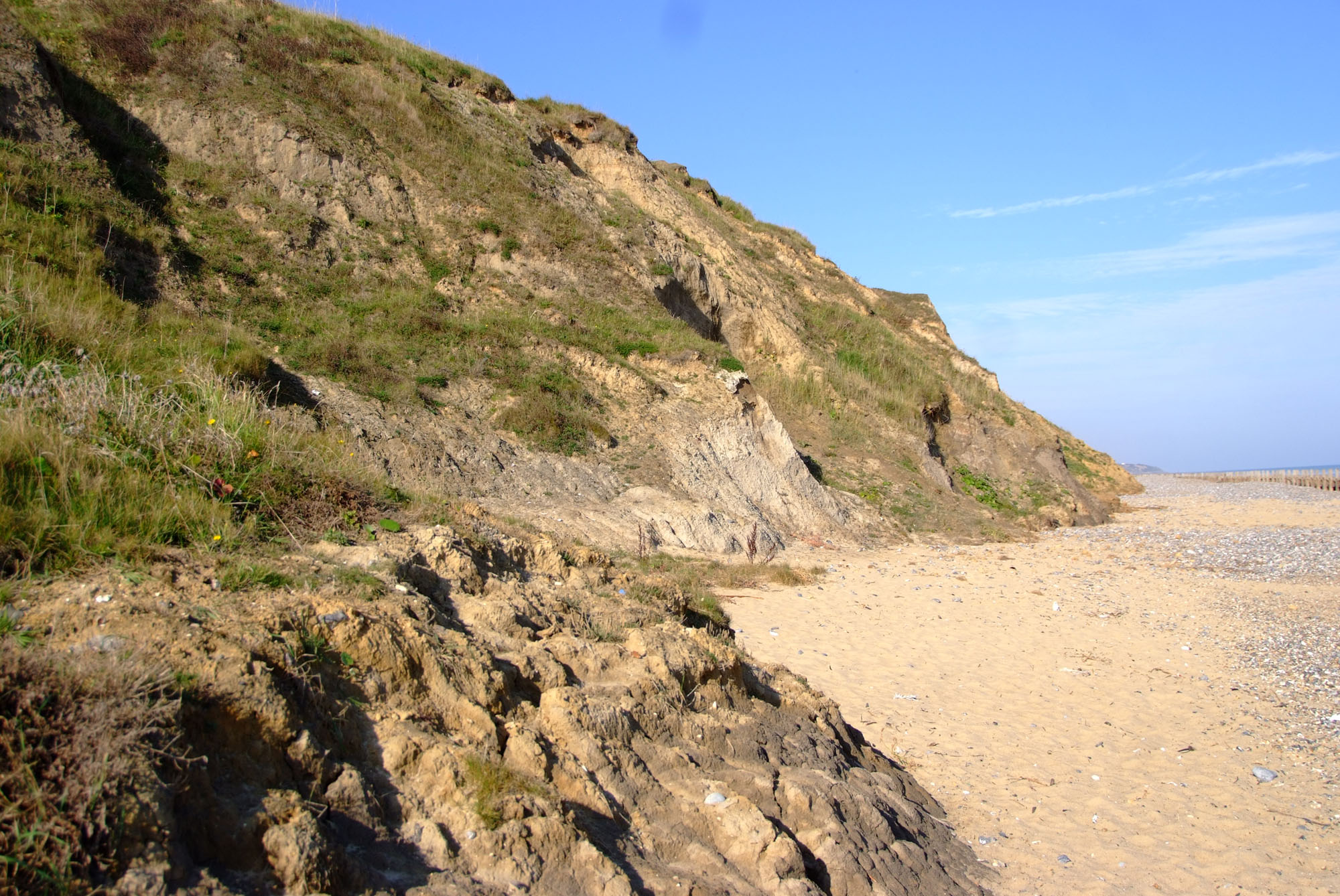 The cliffs from Trimingham to Sidestrand are some of the most spectacular glacial formations along the northern Norfolk coast. These tall, rapidly eroding cliffs here display an array of various colours from the sands, tills and clays. Fossils are mostly Jurassic and Cretaceous erratics.

♦ Sidestrand is best reached from Trimingham and is accessed down a track. Drive towards Trimingham, while heading towards Cromer, and you will discover a large hill with a military base. A giant golf ball-shaped dome will appear.
♦ Before you reach the golf ball and half way up this hill, there is a small turning right (Vale Lane). Follow this and then turn right at the junction. This will eventually take you to the beach with a large amount of parking at the bottom.
♦ The car park area actually sits on top of a chalk erratic (covered in our Trimingham guide). Instead, walk northwest along the beach until you reach the area where the wave baffles have been damaged and the sea washes out the cliffs.
♦ Ref: TG 29976 37794

FIND FREQUENCY: ♦♦ – You can find all kinds of erratic fossils at Sidestrand. Most of these come from the Cromer Till. Microfossils (mostly seeds) can also be found in the Sidestrand Organic Bed.
CHILDREN: ♦♦♦♦ – This location is suitable for children. The wooden sea baffles provide an ideal protection for young children and ensures you cannot be cut off. A sandy beach is ideal for families. Just remember to keep away from the cliff edge.
ACCESS: ♦♦♦ – Sidestrand sits between Trimingham and Overstrand. It can be reached from both, but is easier to access from Trimingham, as the car park is very close to access to the beach. It is a fair walk to the best beds, but well worth the effort. You can also visit the chalk erratic (covered in out Trimingham guide).
TYPE: – Fossils are found washed out along the foreshore and also in the cliffs. These are mostly erratics, such as belemnites and echinoids, which have been deposited by glaciers.

The coastline from Trimingham to Overstrand, and especially Sidestrand, has always been subject to erosion both by rain and sea. Wave baffles have successfully slowed down the rate, but, in recent years, the middle part of the Sidestrand defences have been destroyed by the sea, allowing the beds to once again become washed out. Erratic fossils found in deposits brought down by the last ice age yield Jurassic and Cretaceous fossils, mostly from the Cromer Till. Belemnites and echinoids are common, along with flint sponges. These can be found by searching in the rocks along the foreshore.

What has become interesting in recent years is the Sidestrand Organic Bed, which was all but buried for 20 years before 2008. However, with recent erosion, the bed has once again been exposed. This is full of fossil seeds, pollen and plant remains of Middle Pleistocene age, and is a blue-grey coloured layer at the top of the cliff. However, it is only exposed in one small area.

This is a wonderful stretch of beach, with a spectacular geological section that will reward the effort of reaching it.

The slip road at the Overstrand end cuts through glacially deformed and tilted rafts of Lower Maastrichtian Chalk, embedded in glacial till. Two such rafts are spectacularly displayed in the cliffs. On the beach for the next 800m eastwards there are wave-cut platforms of chalk, being the eroded remains of these and three further rafts.

The Unio Bed from the Cromer Forest-bed, is visible at Sidestrand. This fossiliferous mud containing freshwater mussels (Unio sp.) and is of a broadly similar age to the West Runton Freshwater Bed and yet it’s fossils (especially the shells) indicate that it is younger, giving us a different window on the ‘Cromerian’ complex Within the Cromer Forest-bed sequence there are several climatic cycles. The presence of sediments affected by cold climate is dramatically demonstrated by occasional fossil ice wedge casts. Repeated freezing and thawing at the surface of permafrost creates polygonal patterns of ice-wedges. The soil is forced apart by the expansion of ice and when it melts the sediments fall in from above to form the fossil ice-wedge cast.

Wrapped around chalk rafts are also several metres of the Wroxham Crag (formerly the Weybourne Crag) and these are occasionally seen close to the chalk shore platforms at the Sidestrand end.

Common sense when collecting at all locations should be used and knowledge of tide times is essential. The wave baffles protect the cliffs here, but there is a section of beach where the defences have been damaged. The sea can reach the base of the cliff and cut you off, so visit on a falling tide.

All you need is a good eye for collecting most of the fossils here. If you have a special interest in microfossils, a sample bag and trowel are recommended to take samples from the Organic Bed.