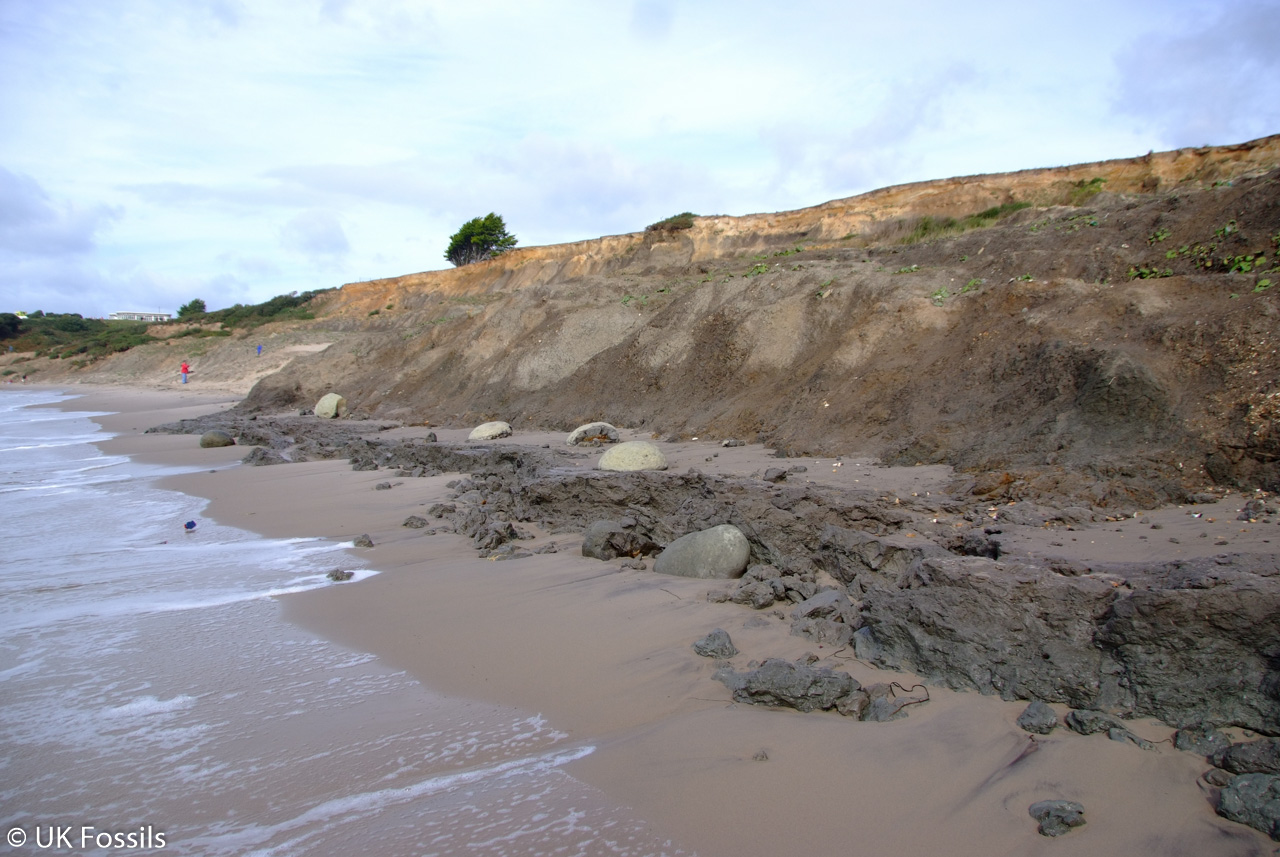 The Barton Clay at Barton on Sea is famous for its hundreds of different species of shells, in particular, its gastropods. The beds are also rich in sharks’ teeth, fish and mammal remains. Sharks’ teeth at Barton can be picked up from the foreshore making this location ideal for all the family.

♦ Head towards Highcliff along the A337 and turn down Waterford Road. You can park at the end of the road leading onto Wharncliffe Road. From here, you can walk down to the sea where the sea defences will be immediately obvious.
♦ Just past the sea defences is the bed where sharks’ teeth are found (on the foreshore) and the Barton beds continue all the way along the beach until the next sea defence is reached. Barton on Sea has a large car park, toilets and a cafe nearby.
♦ It is also close to other facilities along the seafront.
♦ Ref: 50.737703, -1.696971

FIND FREQUENCY: ♦♦♦♦♦ – The beds at Barton on Sea are highly fossiliferous, in particular, for gastropod shells and sharks’ teeth. This is a classic site and you will certainly come home with at least some decent fossil sea snails. However, for shark and fish remains, the right tidal and beach conditions may be needed.
CHILDREN: ♦♦♦♦♦ – Providing that children DO NOT attempt to climb the landslips, they can collect on the foreshore. Climbing the slippages at Barton on Sea is highly dangerous. We also recommend visiting at low tide for children, as the sea can often reach the base of the slipped cliffs.
ACCESS: ♦♦♦♦♦ – There is excellent access to Barton on Sea, which has a large car park, toilets and a cafe nearby. It is also close to other facilities along the seafront.
TYPE: – Most of the fossils can be found on the foreshore at Barton on Sea, especially after storms or scouring conditions, but fossils are also commonly found in the slippages, especially after rain. However, this can be dangerous and should only be attempted if the clay is stable, such as during the dryer summer months.

The Barton beds are famous for over 600 species of shells, in particular, gastropods. The beds change from west to east, allowing you to collect a variety of fossils. It is best to work your way along the beach, walking along the base of the slippages. Fossils can be found on the foreshore, at the base of the cliff and, during scouring conditions, on the lower part of the foreshore.

Although climbing the cliffs is not recommended, many of the cliff slippages are full of shells, as rain water has washed then out of the clay. However, extreme care should be taken if planning on searching the slippages, although good shells can often be found. It is easy to become stuck. If you do plan to explore the slippages, make sure someone else is with you and that you walk carefully, ensuring that you tread on hard ground.

Sharks’ teeth are regularly found and are often easier to find in the shingle of the foreshore, particularly just beyond the sea defences. These come from beds that also contain many other fish remains, such as pieces of jaw, which can also be found scattered across the beach in the sand and single. This bed continues upwards at Highcliff to the middle of the cliff, although these are quite poorly slipped.

It is best to arrive on a fairly high tide and stay until the tide retreats, as sharks’ teeth can be found for quite some way out lying on the sand around this area. Some of the fish pieces can be found in flints in this same area.

The Barton Formation(~36 mya) is from the Bartonian age of the Upper Eocene and is part of the Hampshire Basin. The clays tend to be very sandy in the lower part, with dark sandy clays with stiff drab clays in the middle part and light coloured clayey sands in the higher part. In general, the Barton Clay is extremely fossiliferous.
At the top of the cliff, a layer of Pleistocene Brickearth can be seen. Directly under this, plateau gravels (also Pleistocene in age) rest on top of the Barton Formation.

Common sense when collecting at all locations should always be used and prior knowledge of tide times is essential. Although you can be cut off by the tide, this is not a major cause for concern, as the slippages can be climbed to avoid the incoming water. However, the danger is on these slippages and on the foreshore, especially during winter months. The clay at Barton on Sea can become very soft and dangerous, and care should be taken at all times. Collecting is not recommended directly after heavy or long spells of rain, especially during winter months. Bogs within the slippages are very deep and sometimes difficult to see.

Barton on Sea is an excellent location for fossils. However, some of the shells can be fragile, so bring lots of paper to wrap them with or use Tupperware boxes. In most cases, all you need is a good eye, as most of them can be picked off the foreshore without too much work. However, a trowel or knife does come in handy.