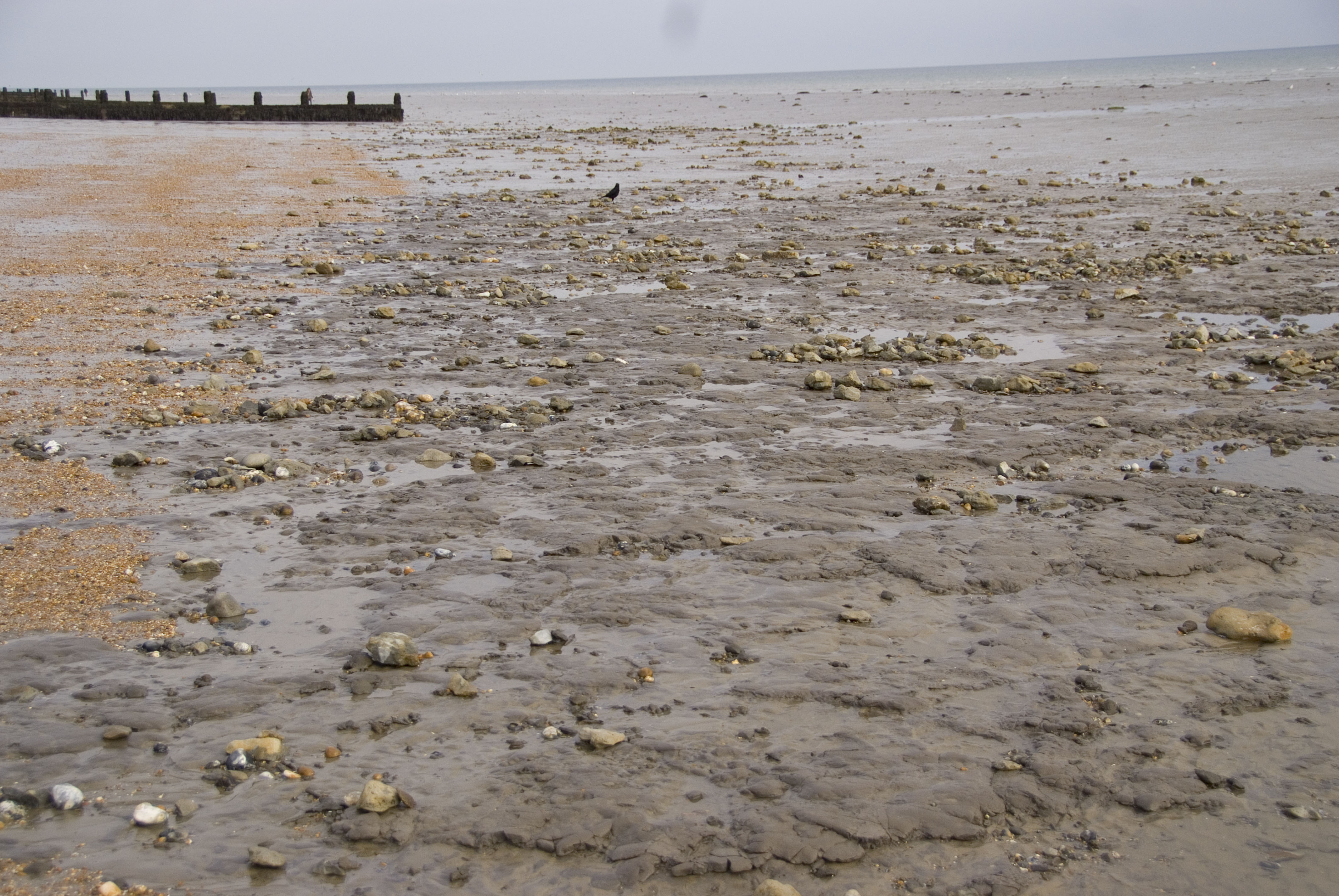 Bognor can be an outstanding London Clay location. Unlike the classic sites of Kent and Essex, this site yields insects, plant remains and a large number of brachiopods and bivalves. Some of these shells are enormous. When beach conditions are favourable, expect to find lots.

♦ Head to the seafront of the western end of Bognor Regis. On maps, the district is marked as Aldwick, (or on OS maps, it marked as ‘Bognor Rocks’).
♦ This is someway west of the pier. Excellent parking exists along seafront. You will know if you get to the correct location since, at Aldwick, there is a long line of beach huts running beside the beach and the parking area.
♦ The foreshore behind the beach huts is the best area to collect from. London Clay exposures can be found both east and west of Aldwick, but are mostly concentrated around the beach near to the beach huts.
♦ Ref: (50.77960°N, 0.69369°W – SZ 934987 to SZ 889970)

FIND FREQUENCY: ♦♦♦♦ – The problem with Bognor is that beach conditions are not always favourable. However, when beach scouring occurs, you can come home with bags of finds. Having said this, even when the London Clay is covered by sand, concretions are normally found, which are packed with brachiopods and bivalves.
CHILDREN: ♦♦♦♦♦ – Although this location is suitable for children, they must be told to keep away from the mud flats and areas of soft clay.
ACCESS: ♦♦♦♦ – Bognor is easy to get to, the fossil location is not too far to walk to and the area is very good for families and children. Being a large town, there are plenty of shops. Parking can be found all along the seafront.
TYPE: – Fossils can only be found during scouring conditions, when the clay is exposed on the foreshore. When exposed, it is easy to find large hard blocks of the clay, as they protrude out from the sand. These are often packed with shells.

Bognor Regis is a type locality for many of the insects found in the London Clay. A number of special papers have been written over the years, in particular, on the many species of beetle found here. The most common fossils here are brachiopods, bivalves and worm tubes. Some of the shells here are huge, including the very large Pinna affinis, which can grow to incredible lengths. Plant fossils can also be found.

Fossils can be found on the foreshore to the western end of Bognor, but can also be found on the beaches to the east and west of the beach huts. Often, excellent exposures of London Clay can be found on at least one part of the beach, but even if this is not the case, you can still find fossils if you look hard enough. This is because most of the brachiopods and bivalves are found in concretions in the clay. Some of these blocks can be very hard and protrude out of the clay. Therefore, even if beach conditions are poor, you should still be able to see some blocks rising above the sand. Take a spade or trowel to dig these out.

Bognor Regis is the only locality in the Hamp-shire Basin to produce fossil fish material fromthe London Clay Formation, Division B, in any quantity

Fish remains can be recovered directly from the fossiliferous units, when these are exposed at low tide, but some of the best material is found in the natural concentrates of pyritic debris or ‘pyrite pools’, and the beach sand can itself be sieved for tiny fish teeth and otoliths. Fish material from these accumulations is invariably disarticulated, but the preservation is very good. Scattered phosphatic nodules are also common in the Aldwick Beds, and these contain abundant semi-articulated fish remains, as well as crustaceans, nautiloids and reptile material.

The London Clay is approximately 47 to 48myrs old and is from the Ypresian stage of the lower Eocene. This is the most easterly exposure and divisions A to C of the London Clay are exposed on the foreshore during the right conditions. Large, hard blocks of the clay are rich in molluscs. A rich fossil fish fauna has been derived from foreshore exposures of the Aldwick Beds (London Clay, Division B) at Bognor Regis, where the preservation is excellent and many type specimens of teleost otoliths have been described.

The London Clay Formation exposed along the coast from Bognor westwards to Aldwick and Pagham comprises intermittent foreshore outcrops of silty muds and sands, which dip at a low angle towards the south-west.

Common sense when collecting at all locations should be used and you should always check tide times before going. There are no cliffs, but there is danger from the soft clay during scouring conditions, as it can be easy to get stuck. If you do get stuck, the tide then becomes a danger.

At first, it appears the chalk is not very fossiliferous. However, if you break open the boulders and rocks with a hammer, you will stand a good chance of finding plenty of specimens. A hammer is really all you need, but a chisel also comes in handy.

The fossils from Bognor Regis are found on the foreshore, but tend to be found in large hard blocks. Even when conditions are poor, you can still see these rocks protruding out of the beach, so a spade comes in handy. A pick is ideal for the softer clay, but a hammer will be needed for the hard blocks.

You will need a hammer to break the larger rocks, which are found lying around the spoil heaps. There are most commonly found at the base of the heaps, where they have fallen from the softer sand.