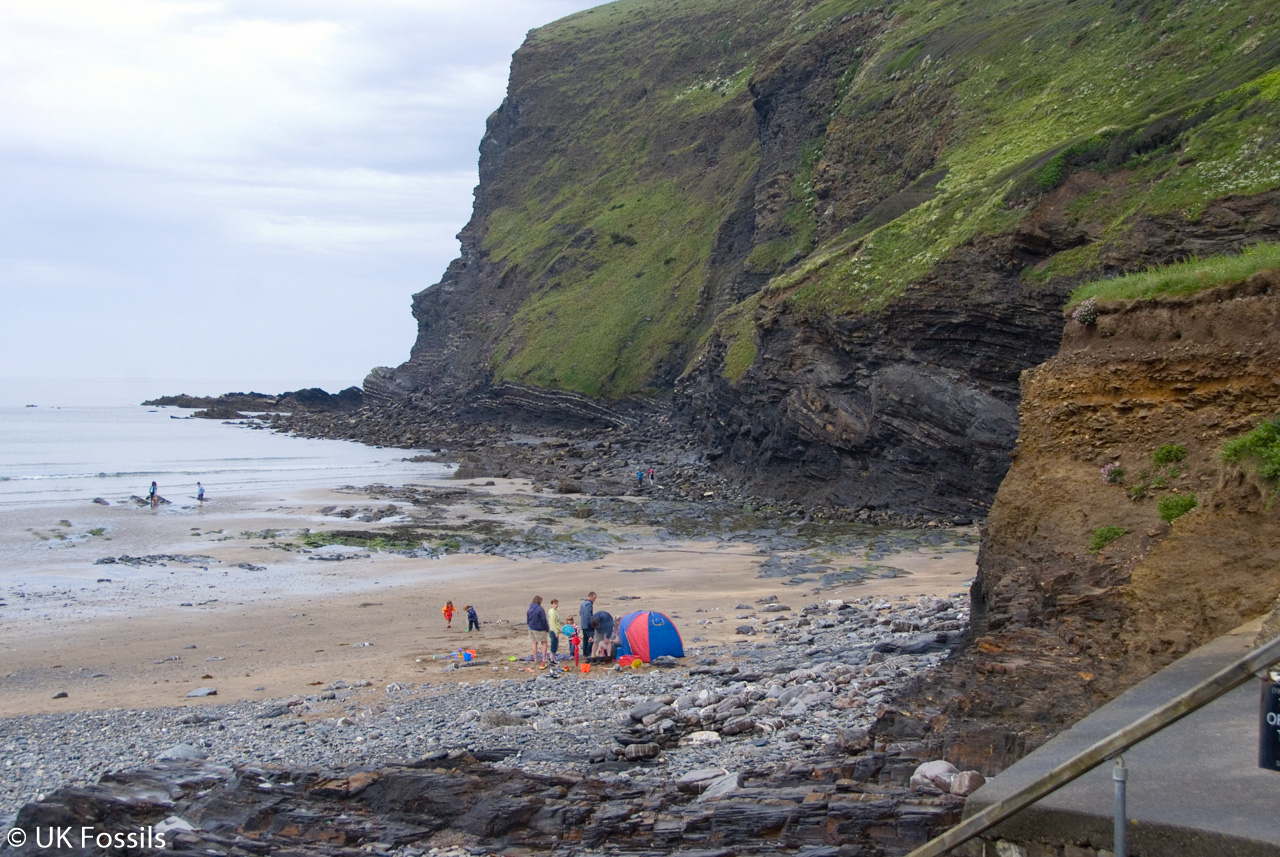 Crackington Haven is a small, but popular location, which has outstanding views. Fossils have been found on both sides of this small cove, but unfortunately it has become over collected. Today, fossils can be difficult to find and are protected.

♦ Take the A39 and follow it southwards to Wainhouse Corner. Here, you will find a minor road signposted to Crackington Haven. Follow this road, which will wind its way over steep hills until you reach the cove.
♦ There is a large car park at the bottom of the road, with plenty of spaces. We recommend that this location is visited outside peak times, since, despite all of the available parking, this location can become busy, with the car park quickly becoming full.
♦ The fossil bearing beds on the south side of the haven are found just under 100m sou’-sou’-west of the mouth of the streams and 220m northwest from the stream mouth on the north side of the haven.
♦ Ref: 50.74291°N, 4.63472°W

FIND FREQUENCY: ♦ – Fossils here are uncommon. In the past, you would expect to find a number of goniatites, but today, this location is recommended for those more interested in the geological features rather than the casual fossil collector. Fossils also cannot be removed from the beach.
CHILDREN: ♦♦♦ – This location is a popular tourist location. It has a large sandy beach, but, unlike other nearby popular beaches, this one is not managed by coastguards. The rocks here are both steeply bedded, and sharp and slippery. Children should avoid playing on these, as they can be dangerous.
ACCESS: ♦♦♦ – This site has an excellent car park. There is easy access and a short walk to the best areas. The two fossiliferous beds are at opposite sides of the haven, but the distance from each side is just 100m. There is also a very handy pub at the car park, just behind the beach, if you want a drink.
TYPE: – Fossils are seen in the foreshore rocks, which extend from the cliffs at each end of the haven. They slope at a 20 to 35o angle to below beach level. The bedrock also protrudes out of the foreshore, with gaps of sand between layers, where softer rock has been eroded away.

On the north side of the haven, about 215m northwest of the mouth of the streams, dark nodules from the base of the cliff contain fossils of the goniatite, Reticuloceras circumplicatile, and the marine bivalve, Dunbarella sp. However, these are rare and often obscured by sand or fallen rocks.

The most common fossils are found on the south side of the haven. These are found about 90m sou’-sou’-west of the mouth of the streams, in the base of some of the sandstones and siltstones, which dip 20 to 35o. Crushed goniatites, such as Homoceras cf. subglonosum, can sometimes be seen.

The rocks here are part of the Crackington Formation (Silesian or Upper Carboniferous ~310 mya).

On the north side of the bay, the rocks mostly consist of black shale, with 45cm thick sandstones being present at the base and at the top of the 91m-high cliffs. Northerly dipping, low-angle faults have caused the shale to become sheared in places, with evidence of a strong movement. Drag-folds (which occur in conjunction with faults, where the rock has bent to the point just before it breaks) and slickensides (which are smoothly polished surfaces caused by friction between rocks, as the two sides of a fault move against each other) are both visible in the first few hundred metres from the extreme east of the haven.

On the south side of the haven, beds of sandstone, siltstone and shale dip 20 to 35o northwards. These contain sole markings (which are created when sand and/or silt fill a depression left on the surface of a shale or layer of mud, often caused in turbulent currents), indicating that they have been overturned.

Common sense when collecting at all locations should always be used and you should check tide times before visiting, as you can easily be cut off by the tide. At this location, the steep angled rocks are slippery and sharp in places, making them fairly dangerous to walk on.

Please note at Crackington Haven Beach has a Coastal Protection Order is in place, and therefore by law absolutely NO beach material of any sort, including beach pebbles with fossils within, may be removed from the beach and foreshore.

Note that this site is also an SSSI. For full information about the reasons for the status of the site and restrictions please download the PDF from Natural England – SSSI Information – Crackington Haven