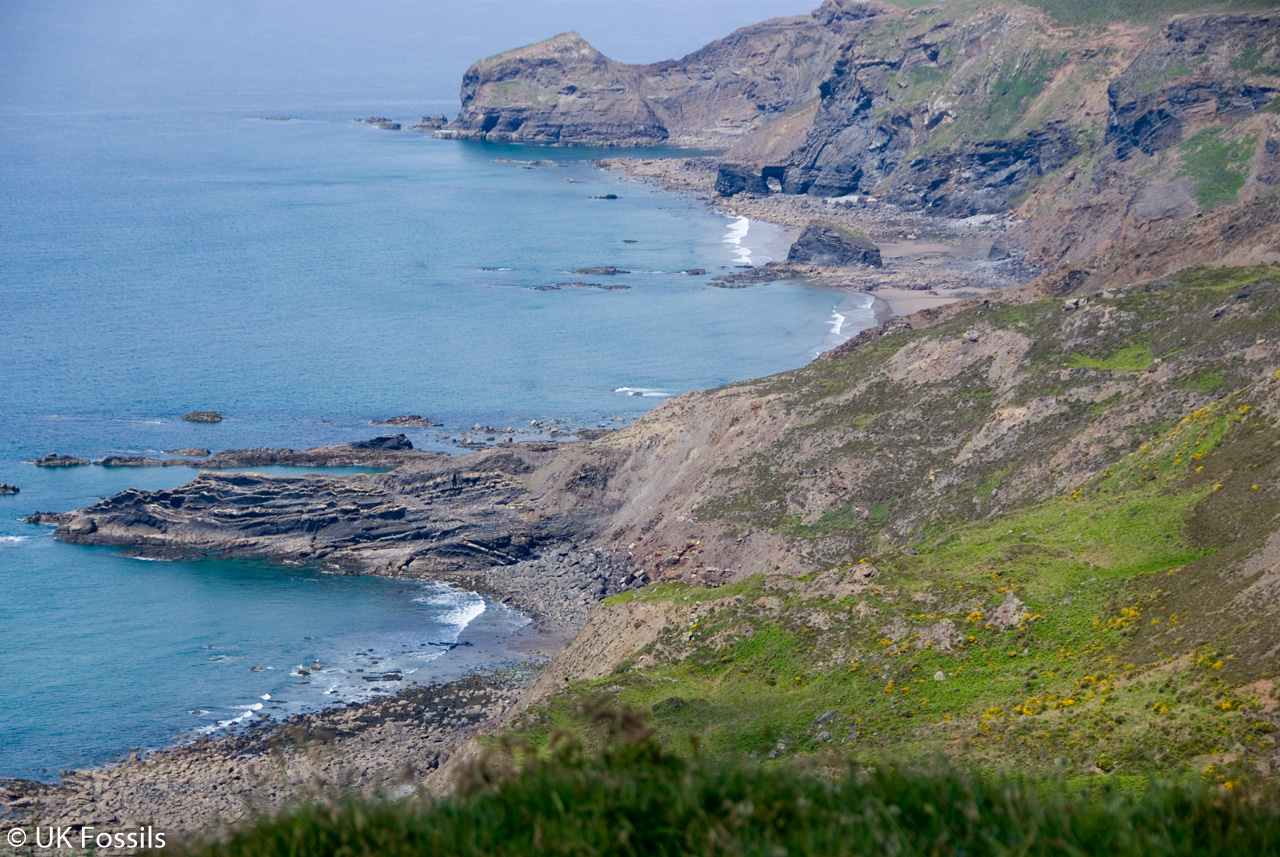 Rusey Cliff is one of the few places in Cornwall where well-preserved fossils can be collected. Plant remains can be found in slabs of the Lower Carboniferous-aged Boscastle Formation, and corals, brachiopods and goniatites can be found in similar aged limestone rocks along the foreshore. The site can be accessed by walking along a cliff top footpath, which takes you through a large area of landslip.

♦ From Boscastle, follow the B3263 towards the A39 until you reach the crossroads between the B3263, where the main Marshgate turnoff is situated.
♦ Take the coastal road to the left towards Newton Farm. At Newton Farm is a car park. Park here and walk further up the road to the start of the public footpath. Follow the trackway until you reach a stile round the bend on the right. Take this footpath and continue across a field to another stile.
♦ At the end of the field, take the footpath to the right and follow down the steep Rusey Cliff landslide.
♦ Access to the beach can sometimes be dangerous here, but fossils are best collected from the rocks along the landside.
♦ Ref: 50.715545,-4.651741

FIND FREQUENCY: ♦♦♦ – Fossils from Cornwall are uncommon and tend to be poorly preserved. However, at Rusey Cliff, slabs of the Boscastle Measures can be found along the landslip, which can be packed with plant remains if you find a good bed. Along the foreshore, there are also blocks of Lower Carboniferous Limestone which contain corals, goniatites and brachiopods.
CHILDREN: ♦ – This location is along a steep footpath down through a landslide. Parts of the walk run alongside steep drops, making this location too dangerous for children.
ACCESS: ♦♦ – There is a difficult walk to this location. It is only a mile, but it consists of a steep and long path through the landslide, which can be challenging for some. However, the walk is well worth the effort even if you don’t find any fossils. Rusey Cliff has some of the best coastal views in the area, so be sure to take your camera.
TYPE: – Access to the beach from here is too dangerous. However, fossils are actually found along the walk through the landslide.

Once you reach the top of Rusey Cliff, looking northwards, you will be astonished by the scenery. Take a moment to admire the wonderful view across the bay and of Rusey Cliff, then start the descent down. The footpath will essentially descend through the landslide, then ascend at the opposite side of Rusey Cliff. It is a circular footpath. Examine the rocks in the path and along the sides of the path. In particular, look out for shale, which contains plant fossils in very good condition.

If you manage to gain safe access to the foreshore, which is not always possible, you should also look out for carboniferous limestone, which contains a coral and brachiopod fauna in the lowest beds and goniatites in the upper beds.

However, the problem with all locations in Cornwall is that the beds tend to dip at near vertical angles, meaning that finding particular zones is very hard. This means that you never know what fossils you might find, so take time to explore the site. There are plenty of rocks to look through along the route. There is not always safe access to reach the shore, but you can gain access to the foreshore by another footpath south of Rusey Cliff.

The Boscastle Formation here consists of black shales and siltstones, which are fossiliferous.

At the base of the cliff, intermittent bands of limestone have been dated from their brachiopod and coral fauna as middle Tournasian in age. Since these are not continuous, they have not been officially given a name, although they are locally referred to as the “Boscastle Limestone”.

The Rusey Fault Zone can be seen at the southern end of Rusey Cliff, which is best viewed where it reaches the top of the cliff. Fault breccia from this fault zone gives an almost bedded appearance, with bands of chert and crinoidal siltstones seen within the breccia.
Further south along the cliff top path, there are also pale green Visean (Dinantian age) slates, which are sandwiched between the outcrops of the Boscastle Measures. The top and bottom of these slates have been defined by low angle faults.

Please take extreme care along the footpath due to the steep drops along the edge of the path. Please also be aware that this location is exceptionally dangerous after rain and should be avoided. Do not try and access the beach from this path. Anyway, fossils are best found along the path, where they have fallen from the upper beds.

If you find any limestone blocks with fossils, you will need a good hammer split them and you will need to wear safety goggles. Try to keep your carrying weight down, as it’s a difficult and steep climb back to the top and the presence of rocks on the path will make it even more challenging

This site is an SSSI. This means you can visit the site, but hammering the bedrock is not permitted. For full information about the reasons for the status of the site and restrictions please download the PDF from Natural England – SSSI Information – Rusey Cliff