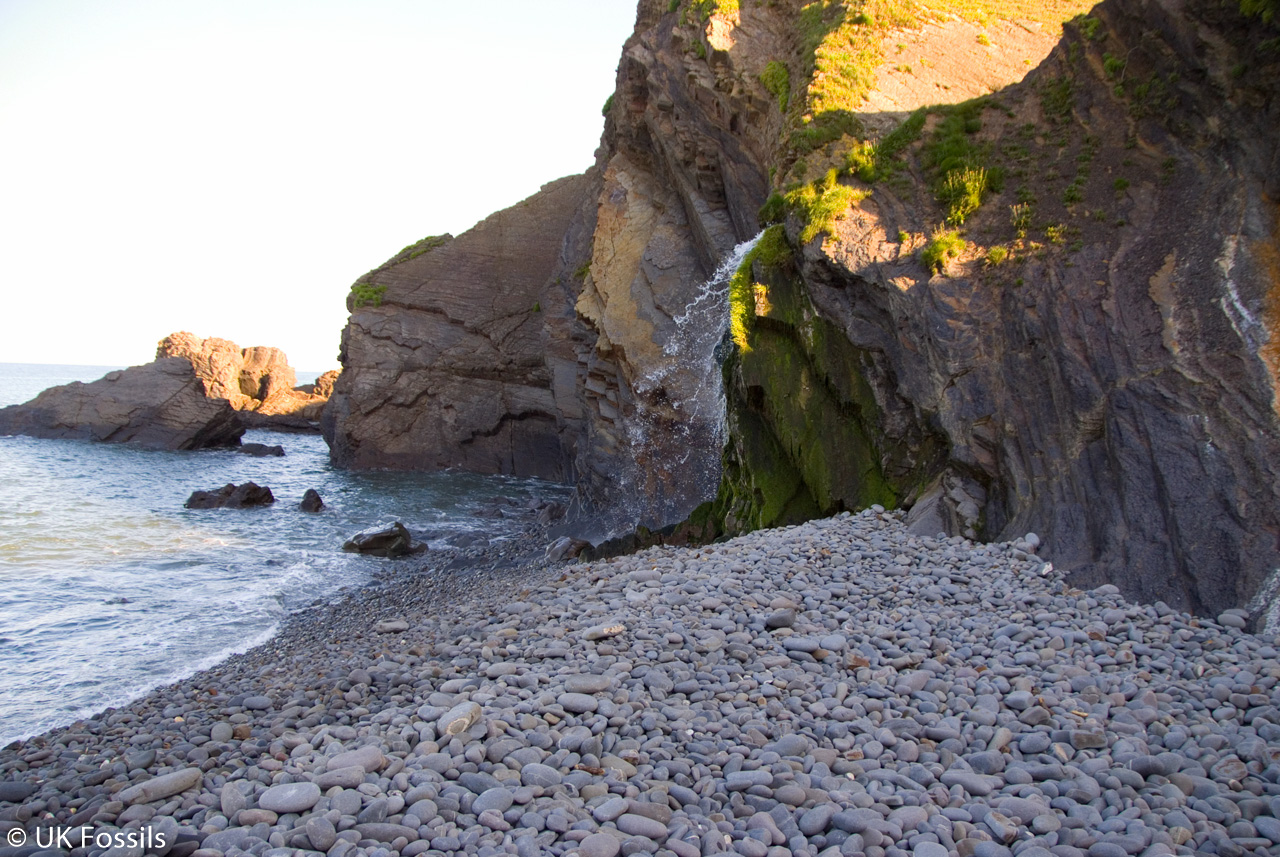 Sandy Mouth is the most northerly coastal Lower Carboniferous location in Cornwall, where plant remains can be found. Here, the rocks consist mostly of the Bude Sandstones, but the upper beds, which consist of mudstones and siltstones, often fall down onto the beach. These contain plant remains, which are fairly common.

♦ From the A39, just south of Kilkhampton, take the road heading west, which is signposted to Stibb. Continue on this road past Stibb, until you reach a fork in the road.
♦ Take the left hand road, which will take you directly to Sandy Mouth. There is parking at the site and an easy walk to the beach. However, there are a number of steps onto the foreshore.
♦ Once down, walk south towards Northcott Mouth.
♦ Fossils can be found from around 200m south of the steps and beyond.
♦ Ref: 50.86107°N, 4.55710°W

FIND FREQUENCY: ♦♦♦ – Success at this location does rely on cliff falls, since the fossils are found in the mudstones and siltstones, which are mostly in beds at the top of the cliff. The lower half of the cliff largely consists of sandstones, which are not fossiliferous. In places, the mudstone and siltstone beds do dip to beach level. If you can locate these beds, then plant remains are fairly common.
CHILDREN: ♦♦♦ – There is a small sandy beach here, which is ideal for children. However, there are no toilets and no lifeguards, so other Cornish beaches would be better for younger children. In addition, the cliff is very unstable and collecting is restricted to the fallen rocks and scree near to these cliffs.
ACCESS: ♦♦♦ – This site has a car park and is a short walk from the parking area. However, there are a series of steps down to the beach.
TYPE: – Fossils are mostly found in layers of mudstone and siltstone. These mostly come from rocks that have fallen from the top of the cliff, although some thinner beds can be found, which dip to beach level.

Plant remains and, in particular, stems can be found in both the mudstones and siltstones. However, they are mostly found in the mudstones, which are easy to identify as they shatter when split and very easily when struck with a hammer. These rocks are mostly found as loose, fallen debris and scree after cliff falls, since they mostly occur in the highest parts of the cliff. In places, thin layers do dip down to beach level, but these are less productive. 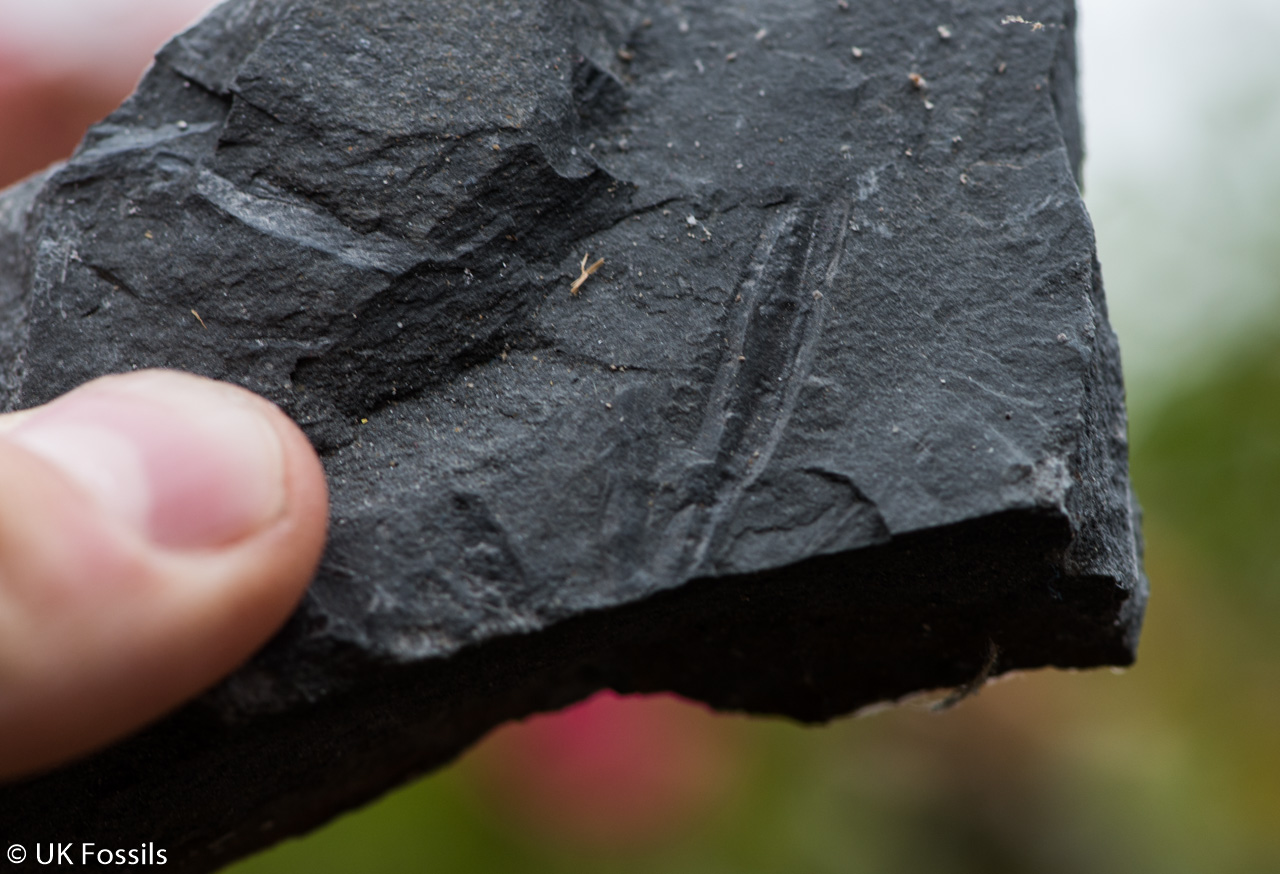 The rocks at Sandy Mouth are from the Bude Formation and of Silesian (Upper Carboniferous) age, approximately  310 million years old. Rocks from the Westphalian Stage (Langsettian to Bolsovian Sustages) being from the middle of the Silesian.

This formation mostly consists of sandstones, but grey/brown mudstones and siltstones can be seen in beds at both the top of the cliff and in thinner layers that dip down to beach level. 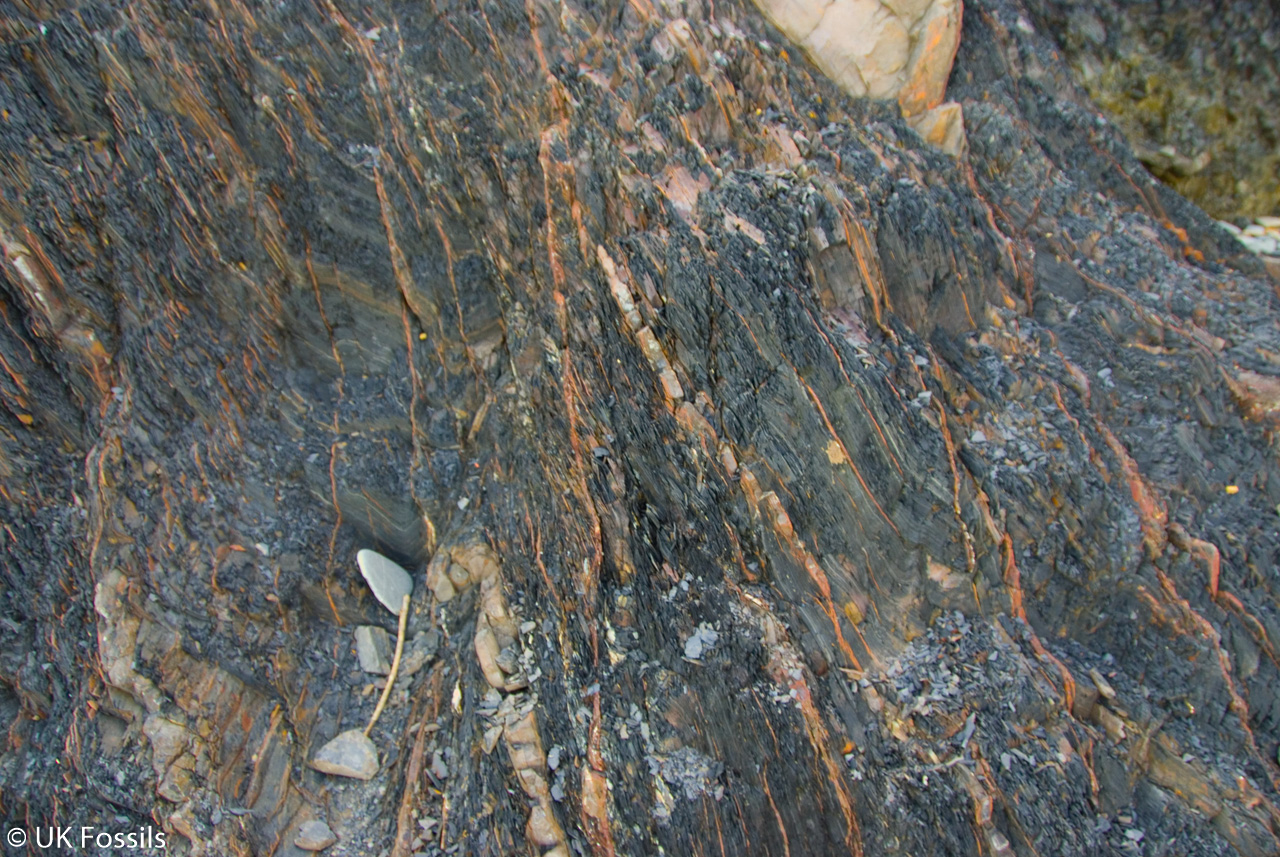 Common sense when collecting at all locations should always be used and you should check tide times before visiting. The tide comes in quickly at this site and always reaches the base of the cliffs. Therefore, it is vital you only collect on a falling tide. In addition, the cliffs are unstable, so can be dangerous. Keep away from their base at all times and wear a hard hat.

The mudstone easily breaks when hit with a strong hammer. Simply splitting the mudstones in this way will usually yield some plant remains. If going anywhere near the cliffs, you should wear a hard hat.

This site is an SSSI. This means you can visit the site, but hammering the bedrock is not permitted. For full information about the reasons for the status of the site and restrictions please download the PDF from Natural England – SSSI Information – Sandy Mouth