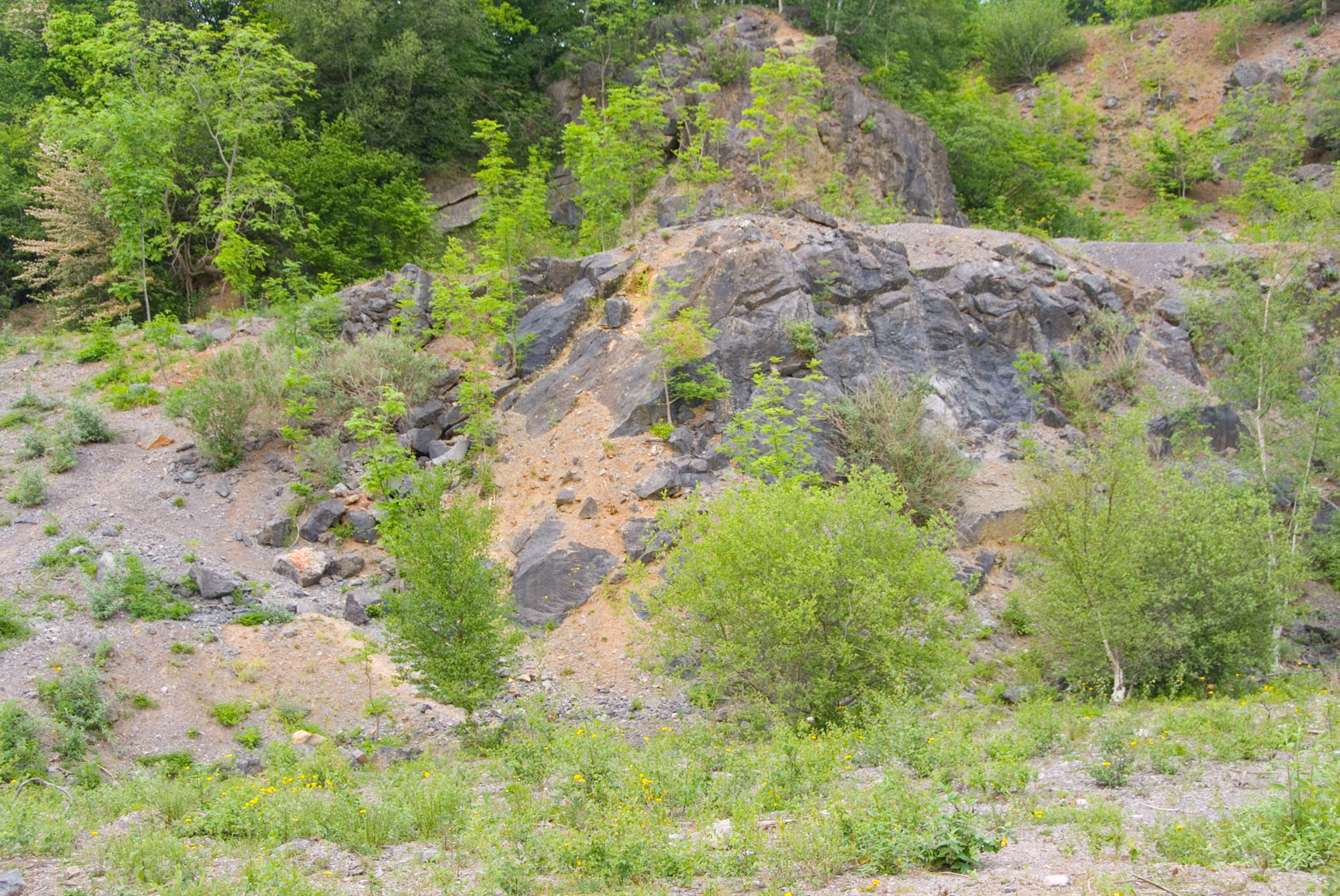 Stocker Hole is a large disused quarry to the south of Radstock, The quarry has a footpath running right through the middle and contains Carboniferous Black Rock Limestone. Corals, and brachiopods are the most common fossils here, with Bryozoans also being found.

♦ From the A37, take the A367 to Oakhill. Once you reach Oakhill, take the minor road on the right, just past the Oakhill Inn pub to Stoke St Michael.
♦ Once at Stoke St Michael, take a left turn through the village near the church. Then take a right turn and follow the road until you reach the junction. At the junction turn left.
♦ There are many quarries around the local area. The most accessible can be found by following the road until you reach the public footpath on your left. Here, you can park on the roadside.
♦ Follow the footpath to the bottom of the valley and then take the path to the right, leads to the quarry.

FIND FREQUENCY: ♦♦♦ – At first appearance, this site looks extremely promising. It is a substantial quarry with tall cliffs and rock and scree found all over the site. Indeed, you can find some very nice fossils here. However, the problem is the rocks are not as fossiliferous as other Carboniferous Limestone sites, with just a few horizons being productive. The quarry floor has become fairly overgrown, although the best chance of finding fossils is – ironically – in the overgrown (often overlooked) floor, where they are being weathered out. Fossils seem less common from the rock faces, scree slopes and the apparently most obvious areas.
CHILDREN: ♦♦♦ – There is a huge area to explorer here and, providing you keep away from the base of the cliff, it is fairly safe. However, we do not recommend it for younger children because the rock here splinters with sharp edges when struck with a hammer. Such fragments are found all over the quarry floor and could cut young children if they trip over.
ACCESS: ♦♦♦ – It is easiest to find this site using an OS map, as the quarries and footpaths are marked. However, there are so many quarries in the area, that even without OS maps, it should be easy to find one of them. Stocker Hole is the most accessible, having a public footpath that takes you through to the middle of the site.
TYPE: – This is a disused quarry with a public footpath running right through the middle. Fossils are best found in and on the quarry floor.

When you visit large sites like this, it is sometimes easy to become overwhelmed by the sheer size and you end up trying to search too quickly and finding nothing. Instead, concentrate on the loose rocks along the overgrown quarry floor. These are nicely weathered out and easy to see and pick up.

You can also collect from the scree and rock slopes, and by splitting rocks, although, this seems less productive than searching the floor. Brachiopods, corals and bryozoans are the most common fossils here.

The quarry is split into two main sections and is cut into the valley sides. There are further quarries to the east and west, with an even larger one south of Stoke St Michael. Some of these are still working, such as the almost one-mile-long “Merehead Quarry”. The working ones will need permission to visit, unlike Stocker Hole, which has unrestricted access.

The Carboniferous Limestone here is the Black Rock Limestone Subgroup (part of the Pembroke Limestone Group. This is from the Dinantian (Lower Carboniferous) and the Tournaisian Stage, Courceyan and Chadian Substages in age. It is a thin-to-thick bedded, dark grey-to-black rock, which splinters very easily.

Please keep away from the sides of the quarry, where the cliff faces are prone to collapse. However, there are plenty of gentle slopes of scree and rocks on the quarry floor. The main danger here is that the rocks that can splinter and become extremely sharp when struck by a hammer. We recommend the use of gloves (and safety goggles), as even handling the rock can sometimes piece the skin.

Most fossils can be found without using tools, by searching the quarry floor for specimens that have weathered out. However, you may want to take a hammer and chisel for splitting the larger boulders. If so, use safety goggles and gloves.

This site is an SSSI. This means you can visit the site, but hammering the bedrock is not permitted. For full information about the reasons for the status of the site and restrictions please download the PDF from Natural England – SSSI Information – Stocker Hole