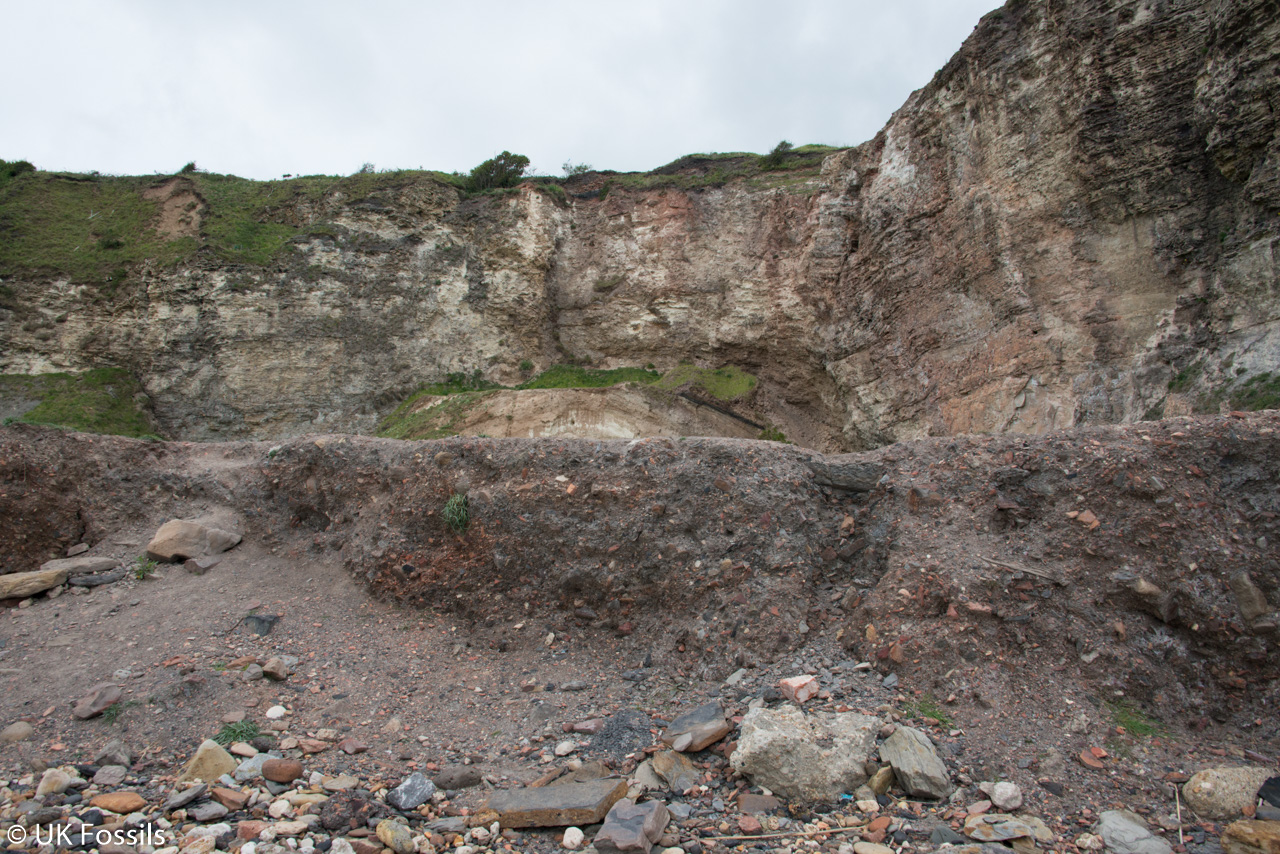 Seaham is a Carboniferous coal measure spoil heap, which was dumped in front of magnesium limestone cliffs at the old Dawdon Colliery. The reserves are so extensive that they have provided years of interesting collecting from spoil, which is gradually being washed by the sea. The colliery closed in 1991, but the tall cliffs of spoil continue to yield well-preserved plants.

♦ Seaham is to the south of Sunderland and can easily be accessed from the A19, both from the north and the south. Nose’s Point, to the south of the town, can be accessed from the A182.
♦ Follow the road along the promenade and, to the south, you will find several roundabouts. There is a car park just before the most southern roundabout.
♦ From here, walk towards the fossil tree sign and down the slipway (which forms part of the spoil).
♦ Ref: 54.823251, -1.3230050

FIND FREQUENCY: ♦♦♦♦♦ – Although there were once several locations in Seaham where Carboniferous fossils from the spoil could be found, all but one have been washed away. The last remaining area is at Nose’s Point, to the south of Seaham, which extends south towards Chourdon Point. However, fossils from Seaham are still common. There are plenty of plant remains to be found and the sea often washes fresh fossiliferous material from the cliffs.
CHILDREN: ♦♦♦♦ – Seaham is suitable for children, but care must be taken when walking down the slipway, which is quite steep and can be slippery in wet weather. Keep away from the edge at all times.
ACCESS: ♦♦♦ – The site is easy to find and has very good car park. Fossils can immediately be found when you reach the beach. Access is near the car park. The only issue is the slipway, which is steep.
TYPE: – Most fossils are found within the various rocks and shale on the foreshore. However, you will need a chisel pick and safety glasses to split many of these rocks.

At Seaham, you never know what you might find, as the spoil from the cliff is from many different beds and bands. Plant remains are quite common. You will see plenty of blocks full of plant stems and small leafs of the same and different species. In addition to smaller plant remains, chunks of tree trunk can be collected from the foreshore. Bivalves, such as Unio, can also be found in the marine bands.

Look for fossiliferous shale with plant remains. Once you find a block, you can then work on it by splitting it finely. Most of these blocks can be found on the foreshore. Some of them may not show any outward signs of plant remains, because they have been washed by the sea, but splitting these may yield a few surprises. Search along the foreshore for chunks of tree trunk and these can often be picked up. Some of them can be in superb condition and are often not too big to carry. The best preserved plants are found in the red rocks, which come from the so-called ‘Red Band’. These are extremely hard, but splitting them is worth the effort. Make sure you wear safety goggles if splitting these, as they easily splinter and sharp fragments can cause injury.

The south-eastward dipping rocks at Seaham are the highest Permian strata exposed on the Durham coast. The sequence exposed comprises the uppermost part of the Roker (Dolomite) Formation (8 metres+), the Seaham Residue (up to 9 metres) and, at the top, the Seaham Formation (about 31 metres). Fossils abound in the Seaham Formation and comprise two species of bivalve and the supposed alga Calcinema permiana, displayed as tiny stick-like tubular remains of present in enormous numbers in much of the rock.

Seaham also provides an Upper Carboniferous Coal Measures spoil heap at Nose’s Point, which was dumped in front of the Seaham Formation cliffs from the old Dawdon Colliery.The colliery closed in 1991, but the tall cliffs of spoil continue to yield well- preserved plant fossils.

The geology of the Durham Coast is characterised by the extensive cliff and foreshore exposures of the dolomites and limestones of later Permian age. These rocks (formerly known as the Magnesian Limestone), were deposited in the Zechstein Sea in a relatively shallow, landlocked sea that extended from northeast England to Poland.

Common sense when collecting at all locations should always be used and prior knowledge of tide times is essential. Take care when visiting this location, as the slipway is both steep and has a sudden drop. Keep away from the edge at all times. The sea always reaches Nose’s Point. However, there is no need to venture past this, because there are no further exposures.

Most of the fossils can be found by splitting the shale and the red-coloured rocks. While the shale is soft, the red rocks are extremely hard. You will also need plenty of paper to carefully wrap up the plant remains and you should ensure that you treat these with consolidating material as soon as possible. The best advice is to take whole blocks showing visible signs of fossil plants home, then split these open and preserve the fossils immediately.

Some fossils can be found just lying on the foreshore, such as chunks of tree trunk.

There are currently no known restrictions at this location. Although you are free to collect rocks and fossils, and use geological tools such as hammers.