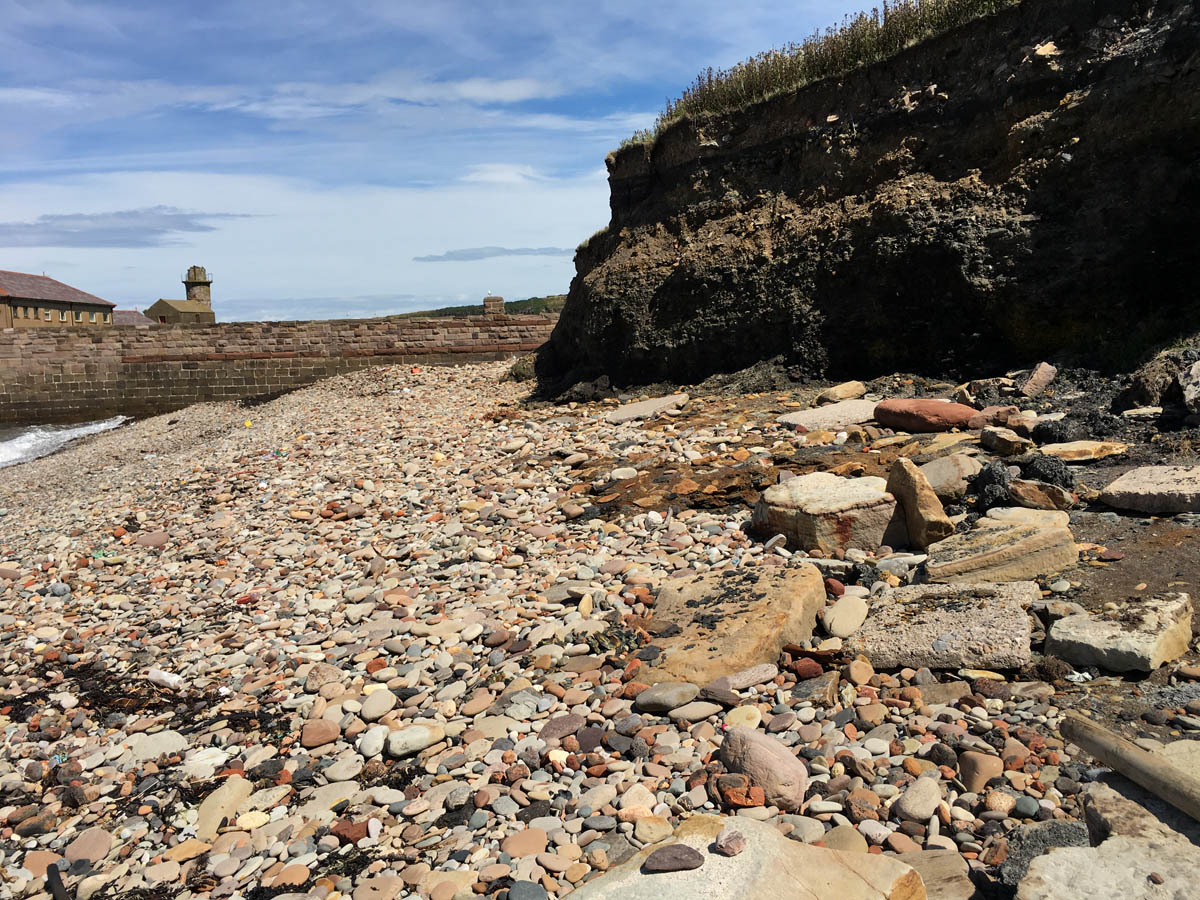 Saltcom Bay is found to the south of Whitehaven, directly after the harbour. It yields a variety of Carboniferous fossils from a mix of shale and limestone. The cliffs have been formed from spoil dumped from the coal mine and steel works that previously existed in the area, which are now being eroded. The site is rich in plant remains, fish scales and corals.

There are no in situ rock formations here, because the low cliffs are made up of spoil from a variety of Westphalian C siltstones, shales and ironstone nodules, which are all part of the Whitehaven Sandstone Series.

Carboniferous spoil from Saltcom Bay, a mixture of shale and siltstones.

The cliffs at Saltcom Bay, spoil from the old steel works.

The West Pier at Whitehaven.

♦ Head to the south of Whitehaven, towards the harbour and marina.
♦ This location is referred to as “South Beach” or “West Pier”. There are two parking areas: one near South Beach and the other to the west along a minor road that leads out of town and up the hill overlooking the harbour and town. You can park here and walk back down, passing near the chimney, wheel and mine shaft of the old coal mine. However, it is quicker and easier to park directly at the harbour, if space permits.
♦ Access can be gained from along the road and parking area just south of the harbour. There is a grass embankment with signs indicating that there is no access to the beach. However, there is a gap between the fence and the last post, which is wide enough to gain entrance, with access straight onto the shore. However, this is done at your own risk.

FIND FREQUENCY: ♦♦♦♦♦ – Shale and hard-banded concretions at the bottom of the cliff and foreshore are full of various Carboniferous fossils, including some excellently well-preserved plant fossils. Most can be found by splitting the shale.
CHILDREN: ♦ – Due to the unpredictable access and unstable cliffs, this site is too dangerous for children
ACCESS: ♦ – Officially, access to the foreshore is closed, for safety reasons. The reason is more obvious in winter months when beach levels drop and a steep drop to the beach is created. However, in the summer months, a gentler slope usually allows better access. You can examine the current safety of this access by walking along the South Harbour wall, but be aware, signs do show that access is not advised.
TYPE: – Low cliffs consisting of spoil from the old steel works and coal mine are from Carboniferous coal measures consisting of a mixture of shale and hard concretions. These are washed out and scattered along the foreshore.

Fossil plants are the most common find, especially roots and fragments of Calamites. You can find any of the documented 30 recorded species of plant remains found from the Whitehaven Sandstone Series, including the most common, Annularia, Neuropteris and Asterophyllites.

Marine fossils, bivalves and fish remains are also common, which have come from the spoil that was dumped by the old steel works and coal mine. In fact, this entire area was well known for its many coal mines during the peak of steel production here.

There are no in situ rock formations here, because the low cliffs are made up of spoil from a variety of Silesian (Upper Carboniferous) rocks from the Westphalian Stage (Bolsovian Substage, comprising  siltstones, shales and ironstone nodules, which are all part of the Whitehaven Sandstone Formation of the Warwickshire Group.

These rocks were dumped from the old coal mine and steel works. The original mine shaft can be seen nearby, not far from the South Harbour wall, and the original steel works’ chimney stands tall on the hillside. Even the coal mine wheel has been left near to entrance of the beach.

Although plant impressions and marine shells can be picked up from loose rocks, you are unlikely to find any good plant or fish remains without splitting the shale. Therefore, a good splitting hammer, a chisel and eye protection are recommended.

Important: officially, access to the beach is not allowed. Warning signs point to unstable and steep cliffs, but access can be gained by the South Harbour Wall, and, in dry summer months, this is much easier and safer than most other locations. However, you are at your own risk if you ignore the warning signs. If you do, ensure you check tide times and watch for falling rocks.

There are no restrictions on hammering or collecting, but signs indicate that there is no access to the beach due to the cliffs being unstable. Most of the time, access is quite easy, especially in summer. However, please follow our code of conduct