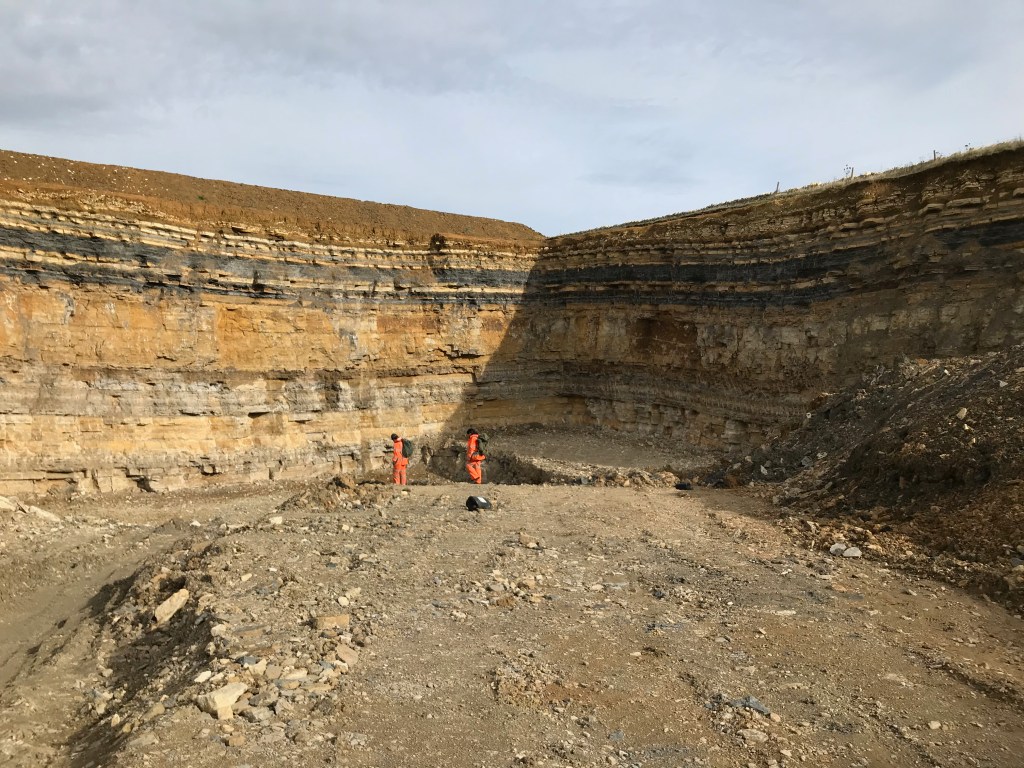 Two separate locations near Worth Matravers provide an opportunity to see where sauropod dinosaurs once gathered at the shoreline of a large, shallow lagoon around 140 million years ago and to visit their incredible trackways. At the nearby working quarry, (where permission will be essential to enter)  an opportunity exists to find fossils from that lagoon environment, including bivalves, gastropods, crustaceans, fish remains, bones and carapace fragments of turtles, mammal teeth and bones, as well as plant remains.

For the dinosaur trackway
♦ From Wareham, take the A351 to Corfe Castle, then turn right onto the B3069 to Langton Matravers and follow Durnford Drove (signposted to Langton House). Continue along a single track road on the right to the car park at Spyway (National Trust) at BH19 3AA.
♦ From the car park, follow the footpath south towards the sea and turn right onto the Priest’s Way, heading west. Continue on the Priest’s Way for about 1.2km – the dinosaur footprints are signposted on the right, just past the turning for Acton.

♦ Admission to the dinosaur trackway is free and open to visitors all year, as it is on National Trust property.

For Keates Quarry
♦ Stay on the B3069 (east) to the Burngate Stone Carving Company (BH19 3BE). Take the first turning on the right past the company, then take the second on the left into the Keates Quarry entrance.
♦ Please be aware that admission to the dinosaur trackway is not accessible via the quarry.

FIND FREQUENCY: ♦♦♦ – Fossils in the Purbeck Limestone are not common, although a few specimens can usually be found.
CHILDREN: ♦ to ♦♦♦♦♦ – The dinosaur trackway is an excellent and safe site for children. However, children will not be allowed in the working quarry.
ACCESS: ♦♦♦ – Access to the trackway requires about a 1.2km walk from Spyway, with car parking there. The quarry provides  no parking or access to the dinosaur trackway
TYPE: -The quarry is a working quarry, with all the hazards that this entails. The trackway site is a visitor attraction owned and run by the National Trust.

Fossils cannot be collected at the trackways site and the quarry is a working quarry, so most parts of the site are not accessible. Provided that access is granted,  the visible spoil heaps are plentiful and are as good as any of the quarry faces for fossil finds. Just turn over the rocks from the large heaps of spoil.

The Purbeck Limestone at Keates Quarry is typical of this stone in the Purbeck Hills. The Keates family has been quarrying in Purbeck since the late seventeenth century, operating from the current site since 1951. The Purbeck Limestone can often have a high fossil content. The rock is hard, so extraction requires a geological hammer, chisels, safety glasses and a fair bit of effort.

Blocks of rock, containing small fish bones, scales and so on may need preparation using a weak acid (such as white vinegar) and steel pins, to get to the fossils within.

Freshwater bivalves (especially the mollusc, Unio), gastropods, the teeth and bones of fish and the shark Hybodus, turtle bones and carapace fragments, mammal bones and teeth, and plant remains of ferns, conifers and cycads can all be found.

A visit to Worth Matravers will not be complete without a visit to The Square & Compass pub, which has an excellent and highly recommended fossil museum of finds made in the local rocks.

The dinosaur trackway
During a few hours of the late Jurassic/early Cretaceous, a number of different individuals, including a juvenile, walked over this area, along the shoreline of a vast freshwater lagoon. The prints were sealed by a swift deposition of sediment over the top. Although a great many dinosaur footprints have been found in the Purbeck Hills and along the coast, these sauropod tracks are the only place where a great number can be seen in the bedrock.

The footprints are found in the Purbeck Freestone, which is one of the many different limestones that form the Purbeck Hills. The late Jurassic and Cretaceous periods were marked in Purbeck times by subtly changing environments. As a result, it is a geological landscape formed of many layers of stone, whose character varies greatly both between and across them. As well as this variation in geological formation, subsequent processes have tipped, rippled and eroded the stone, making the Purbeck beds a real challenge to understand.

The footprints (over a hundred of them) were probably made by brachiosaurs. They were first noticed in 1997, when Kevin Keates, the quarry owner, was quarrying the Freestone. The Upper and Lower Freestones (quarrymen terms) are separated by a bedding plane and it is here that the footprints were preserved, on the surface of the Lower Freestone. After the Upper Freestone had been stripped off, the top surface of the Lower Freestone was left exposed. Quarrying ceased and the footprints were temporarily re-buried with a protective covering of fine gravel and scalpings, and long term responsibility for the site was handed to the National Trust, who owns the land in which the quarry sits. In 2013, the decision was made to uncover the footprints once more, while the National Trust and the Jurassic Coast World Heritage Site Team worked together to develop a long term management strategy. Visitors should be aware that, although the discoveries were made when the site was under the management of Keates Quarry, after the discovery, the site has been handed back to the National Trust, which has been restoring the land around it to secure the site for safe public access.

Keates Quarry is in the Purbeck Group of rocks, which consist of inter-bedded limestones and mudstones of Berriasian age from the Lower Cretaceous. Previous names include the Purbeck Limestone Formation and Purbeck beds.

A geological hammer and chisel is essential, if you have access to the quarry site. The limestone is hard and specimens will need to be carefully extracted. Ensure that you wear safety goggles if using hammer and chisels.

The dinosaur trackway is a National Trust site and is safe for adults and children alike. If visiting the quarry, exercise care when climbing on the quarry spoil heaps and be aware of any moving vehicles associated with the working quarry.

The dinosaur trackway is publicly accessible and is now a National Trust site.