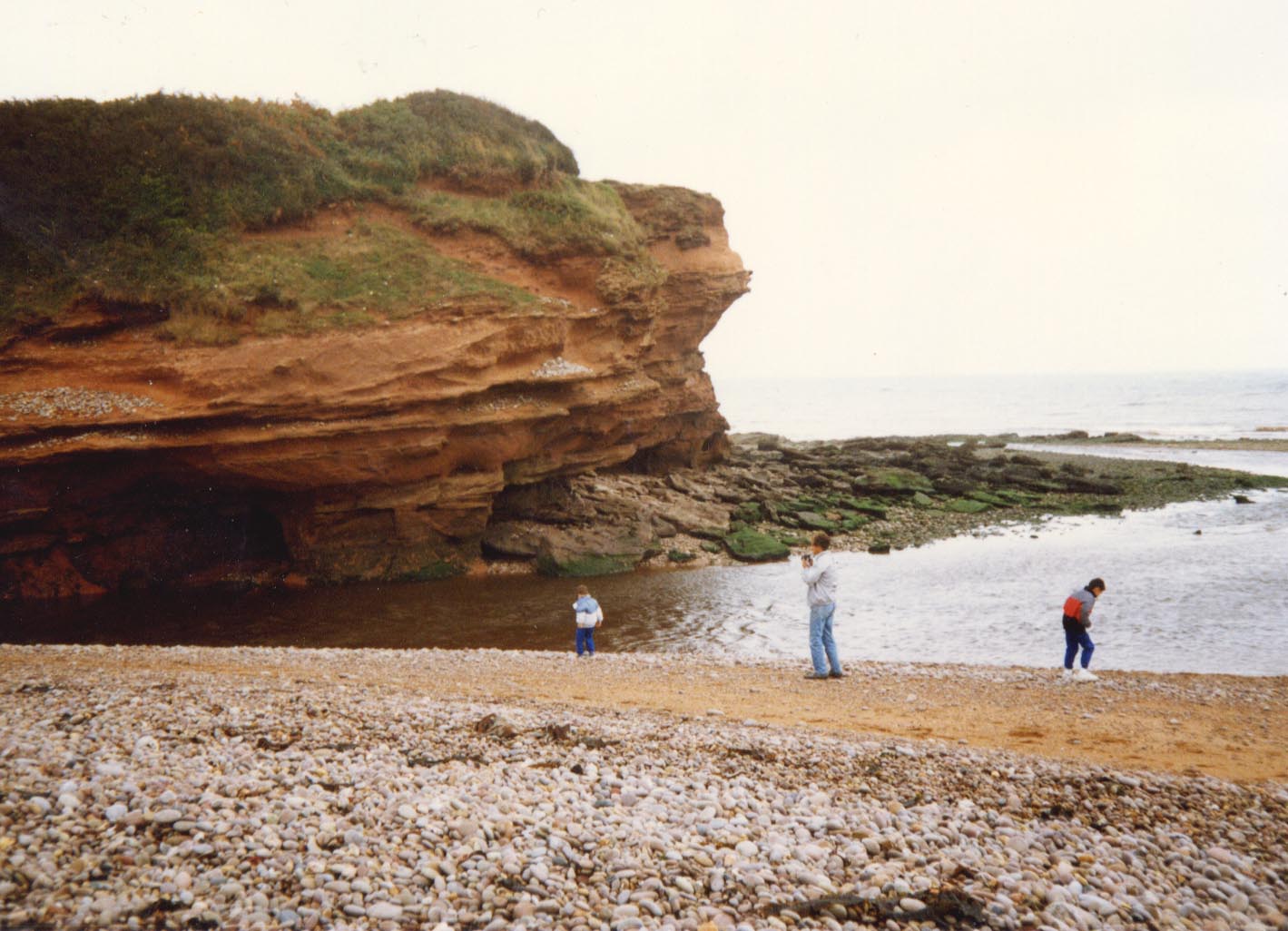 Budleigh Salterton is famous for its pebble beds, which yield large numbers of shells when individual pebbles are split open. This site is an SSSI and also has a local bylaw making removal of the pebbles illegal. You can split the pebbles which are found along the foreshore, to see the shells, but cannot remove them!

♦ From Exmouth, head towards Budleigh Salterton. Then head to the east of the town, past the hospital.
♦ You will find a large car park, which gives access almost directly to the beach and the river.
♦ This location is suitable for families with children.
♦ Fossils are found in pebbles around the beach but also in the river. However, taking pebbles from the beach is not permitted here as a result of a local bylaw.
♦ Ref: 50.63027°N, 3.31191°W

FIND FREQUENCY: ♦♦ – Fossils are found within the pebbles from the Budleigh Salterton Pebble Beds, which can be found all over the beach. However, this site has a local bylaw which prohibits the removal of pebbles from this foreshore, in addition to SSSI rules which restrict hammering or removing pebbles from the cliffs. You can still split beach pebbles, but cannot remove from the site. This means you can photograph any shells and leave for others to see.
CHILDREN: ♦♦♦♦♦ – This location is suitable for families with children.
ACCESS: ♦♦♦♦ – There is an excellent car park with toilets and a cafe, and it is a very short walk to the beach. This is also a major tourist location.
TYPE: – Fossils are found in pebbles around the beach but also in the river. However, taking pebbles from the beach is not permitted here as a result of a local bylaw.

Along the foreshore, pebbles from the Budleigh Salterton Pebble Beds, can contain derived fossil shells of Lingula lesueuri and Orthis budleighensis,which originated from the Ordovician period. These are reddish quartzite pebbles and are generally easy to spot. Only a small number of pebbles contain fossils. You are free to split the pebbles on the beach to view the shells, but you cannot remove them from the beach. Local bylaws are in place making it illegal to remove these pebbles. Splitting the pebbles is still fun for all the family, but remember to take a camera. You can also find pebbles pre-split containing shells.

The actual cliff section is an SSSI, making hammering and removal of pebbles illegal. However, the same pebbles can also be found along the whole Exmouth to Sidmouth coastline, transported by long shore drift and removing the pebbles is only restricted to the Budleigh Salterton area. Fossils can also be found in the Devonian rocks on the south side of the River Otter. Specimens of Cyrtospirifer verneuili and Homaloneotus sp. can be found in fallen rocks and scree, which have not been rounded into pebbles. Such rocks may or may not be included in the local bylaw stating that “pebbles cannot be removed”, depending one’s interpretation of the rule.

Many of the pebbles along the foreshore come from the Budleigh Salterton Pebble Beds. These are derived and have been dated as being 440myrs old from the Ordovician. The pebbles were formed and transported in a giant river that flowed 240mya during the Triassic period. The same rock can be found in Brittany, where the river probably had its source.

The Triassic Pebble Beds can be seen in the cliff sections at both sides of the River Otter. They are made up of scattered, sub-angular fragments of quartzite, grit and quartz, intercalated with dark red and sometimes grey and buff sands. In the Exeter and Newton Abbot districts, these consist of predominantly brown, horizontally-bedded gravel with subordinate lenticular beds of pebbly sand and sand in troughs. The gravel is composed of well-rounded pebbles, cobbles and boulders in a coarse-to-fine gravel and silty sand matrix. The clasts are mainly (84 to 90%) metaquartzite, together with porphyry, vein quartz, tourmalinite and feldspathic conglomerate. Further south from the mouth of the River Otter, the cliffs are Devonian in age and part of the Dawlish Breccias and Lower Sandstones. These are poorly fossiliferous, with very rarely the brachiopod Cyrtospirifer verneuili and the trilobite Homaloneotus sp. being found.

Common sense when collecting at all locations should be used and prior knowledge of tide times is essential. Please be aware that the mouth of the River Otter can be very deep and, during winter storms, the river can cut you off.

A small hammer is all you need to simply split the pebbles near the River Otter (but not from the beach). However, you need a good eye to correctly identify the reddish colour of the fossiliferous pebbles. Look out for shells showing on the surface of any pebble. Fossils from the beach can only be viewed and photographed as the removal of pebbles is restricted by local bylaws, and you should certainly not remove pebbles from the cliffs themselves. However, pebbles can also be found along the whole Exmouth to Sidmouth coastline, transported by long shore drift and removing pebbles is only restricted to the Budleigh Salterton area.

This site is an SSSI. This means you can visit the site, but hammering the bedrock is not permitted. For full information about the reasons for the status of the site and restrictions please download the PDF from Natural England – SSSI Information – Budleigh Salterton