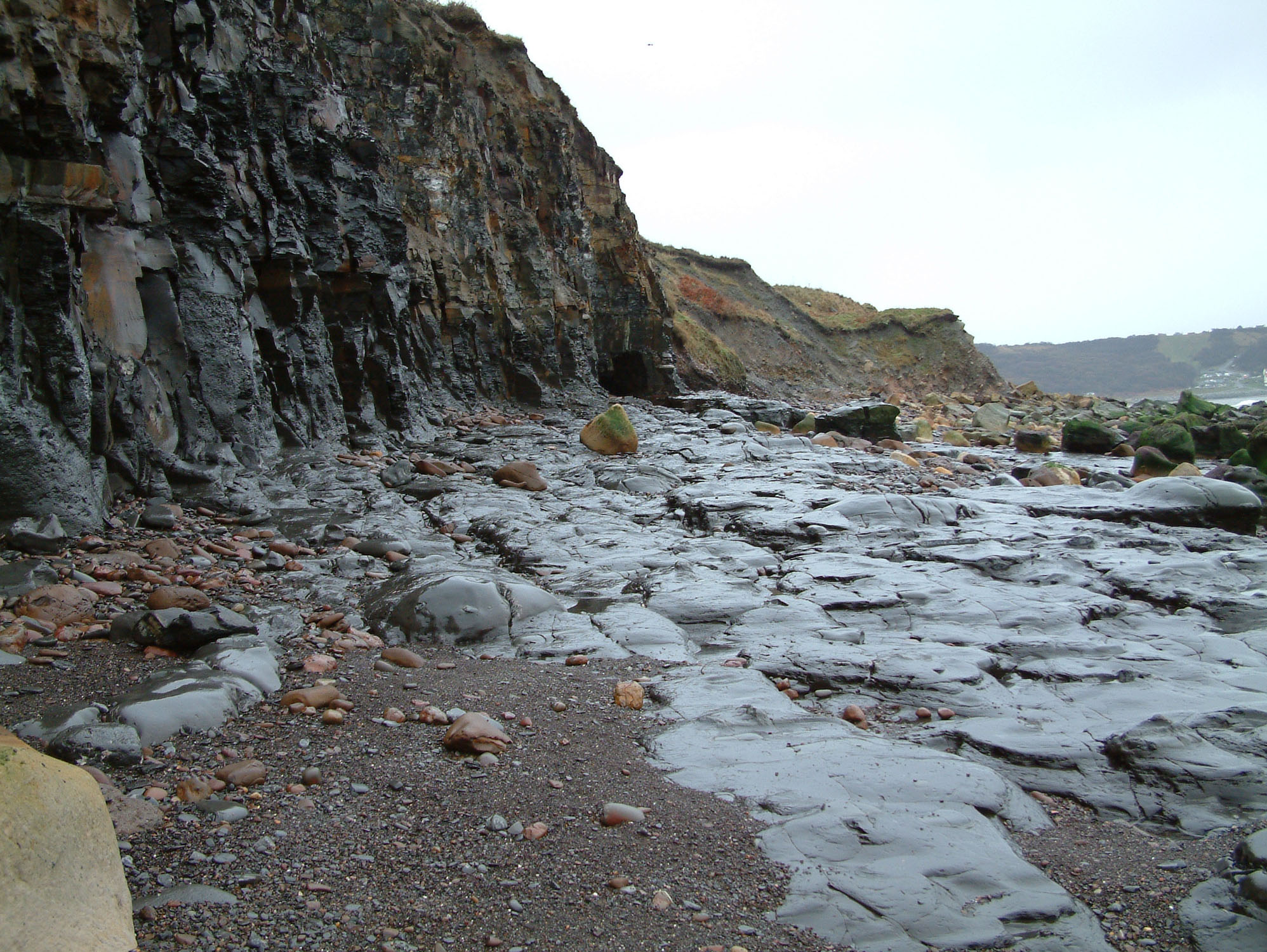 Kettleness is the most productive location in Yorkshire for reptile remains. These are common and can be found loose or in nodules. Kettleness is also very popular for ammonites, which are similar to those from Port Mulgrave.

FIND FREQUENCY: ♦♦♦♦♦ – Kettleness yields excellent ammonite specimens and dinosaur/reptile remains, but is also frequently collected from, so you will have quite a lot of competition. The best time to collect is after winter storms or scouring conditions.
CHILDREN: ♦ – Due to the dangerous access to this location, children and families should not visit. This area is for the fossil enthusiast, who has plenty of energy for the long hike from either end of Kettleness.
ACCESS: ♦ – The only access is by a very long walk from either Runswick Bay or Sandsend, which can also be dangerous and access is limited because of tidal conditions.
TYPE: – Most of the fossils can be found on the foreshore at Kettleness within nodules or loose within the shingle and shale, especially after storms or scouring conditions. However, fossils are also commonly found in the cliff on the scree slopes either in nodules or loose.

The middle of the bay is where most of the reptile and dinosaur remains come from. They can often be found in the cliff, within the scree at the base of the cliff or within piles of shale exposed on the beach. After storm high tides or heavy rain, nodules and remains get washed down and can often be found at the bottom of the cliff. The sea then washed these down the beach, depositing them in the piles of shale. Look for areas of shingle and shale deposits, and you will often find ammonites within them.

Also look in the areas of fine single, where many smaller finds can be made, especially near the waterfall and the base of the cliff. Keep an eye open for plant remains from the ironstone rocks that have fallen from the very top.

The prominent beds are from the Cleveland ironstone Formation, which is comprised of the Penny Nab Member and, above this, the Kettleness Member. Large, heavy ironstone blocks found on the foreshore come from these beds. The Kettleness Member can be seen in the cliffs, which is made up of the Jet Rock and bituminous shales. This is where the nodules containing ammonites, reptiles and dinosaur remains come from.

Exposed on the foreshore is the Grey Shale Member, from the Whitby Mudstone Formation, which lies above. Pockets of belemnites and shells tend to be found grouped together in small death assemblages or colonies respectively.

Further south, past the first headland, a reddish, pink-coloured rock can be seen on the foreshore. This is part of the Alum Shale Member. The Ovatus Band can also be seen, although most of the nodules have been removed. Above this is a series of hard shales, including the main Alum Shale and, at the top, the Cement Shale.

Common sense when collecting at all locations should be used and knowledge of tide times is essential. It is easy to get cut off at Kettleness and the sea always reaches the base of the cliff. Therefore, you should ensure you return in good time. Also be aware of sticky areas on the slippages, as it is easy to get stuck especially after rain.

Most of the fossils can be found in foreshore nodules or loose within the shingle, however bones can also be found in the cliff face and in large nodules. You will need to take a pick and hammer for both instances.