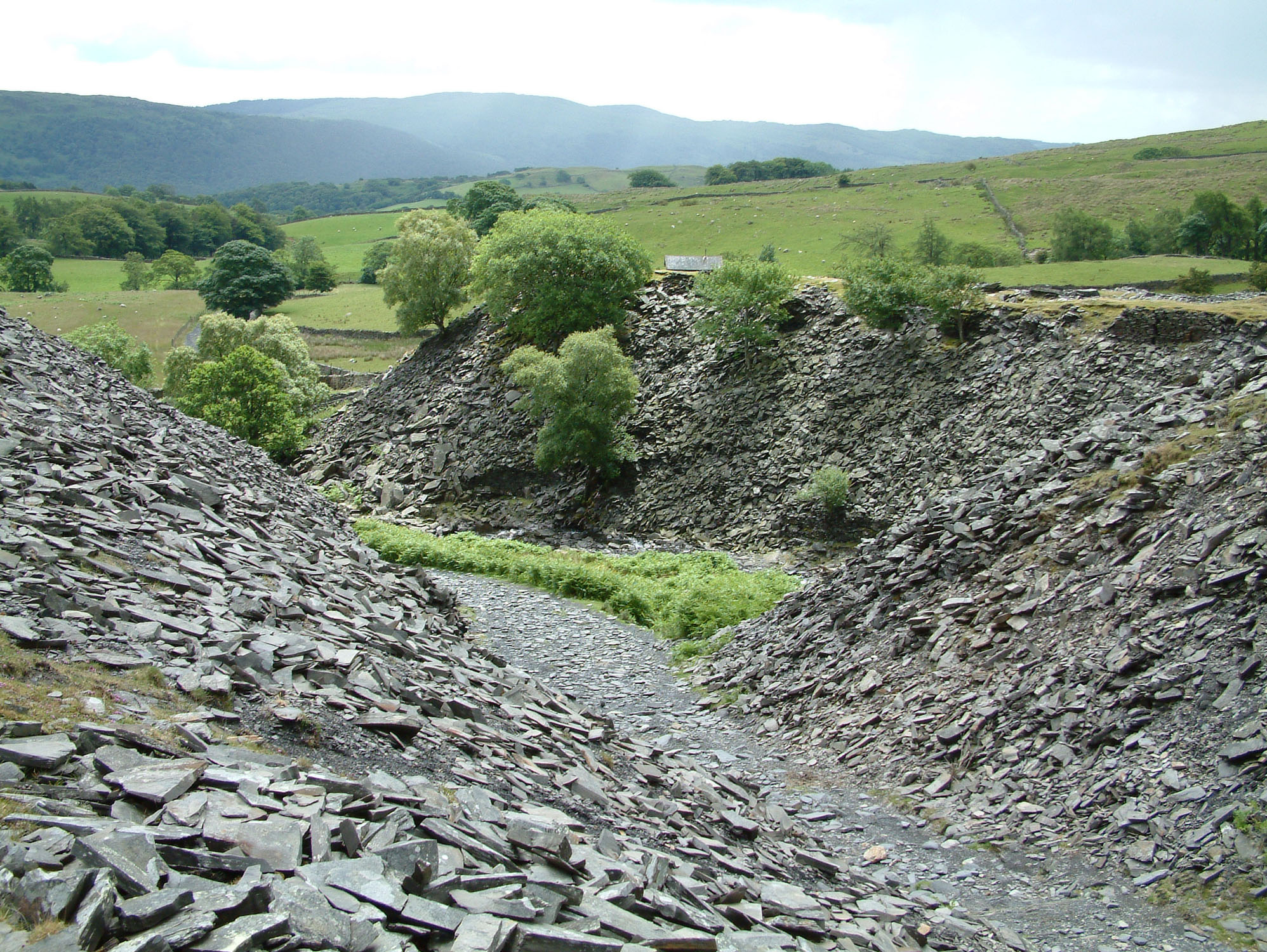 The area around the town of Coniston from which fossils and minerals can be collected is quite large. It includes several quarries, and several becks and scree slopes. There is also a number of small cuttings. Graptolites and trilobites can be collected here, along with brachiopods.

♦ From the A593 at Coniston, follow the road out of town to the west towards the mountain, the Old Man of Coniston on a narrow road.
♦  Continue along this road until you reach a large car park. Access to cars is banned past this point, and it is a mile walk to the quarry
♦ Ref: 54.36630°N, 3.11086°W

FIND FREQUENCY: ♦♦♦ – Once the right sections are found, there are plenty of fossils to be collected. The hardest thing is knowing where to look.
CHILDREN: ♦ – Some of the quarries and streams are very dangerous, so this location is not recommended for children.
ACCESS: ♦ – Coniston is fairly easy to find, but the area is so large that finding good fossiliferous sections is hard. There is a mile walk to the quarry.
TYPE: – The Coniston area has many sections that are good for fossil collecting. There are several quarries and cuttings, and a number of streams and scree slopes.

Trilobites, such as Calymene, Tretaspis and Phillipsinella, can all be found at Coniston, Other species have also been found, but are less common. Over thirty graptolite species have also been discovered, which are mostly grouped in bands where several different species can be collected. Many species of brachiopods are also common.

There are many scree slopes in the Coniston area and fossils can be found in these rocks – all you need is a good eye. There are a number of streams and becks, with the most fossiliferous being Torver Beck and Ashgill Beck. Trilobites and graptolites can be found in these. Look for black bands of shale. There are several quarries in the area, but most are small, overgrown or flooded. However, some have good spoil heaps close by. The biggest quarry is Ashgill Quarry, which is where most of the best fossils from the Ashgill stage can be collected.

The Llandovery of the Silurian and the Ordovician Ashgill and Caradoc Series are exposed across this location.

Coniston is fortunate in that there are two totally different rock groups represented in the area. Each “rock group” is made up from a number of different rock “formations”. This variation in rock types makes it an interesting location for the amateur geologist or interested fell-walker.

The geology of the Coniston area is best viewed from somewhere like Grizedale Forest, which is to the east of Coniston. The terrain from the forest to west of Coniston consists of wooded, agricultural land, with gentle rolling hills of relatively low relief. The rocks underlying this area are marine sedimentary rocks from the Windermere Supergroup.

There is then a major change to a bracken-covered area with few trees, steep, craggy, rocky terrain and mountains. All of the rocks here are of volcanic origin. They are part of the rock group known as the Borrowdale Volcanic Group.

Volcanic rocks of the Coniston Fells were laid down around 460 million years ago. The total thickness of the BVG laid down in the Lake District is over 7km. After the volcanic period the area subsided beneath the sea. In sub-tropical shallow waters teaming with marine life, the Coniston Limestone was laid down. This was not the limestone frequently seen from the Carboniferous period but a less pure limestone from the much earlier Ordovician. Slowly the sea deepened and over a long time period large amounts of muds and sands were deposited. These are the Windermere Supergroup sediments that are also of great thickness.

Coniston can be a very dangerous area. There are a number of fast flowing becks and extremely deep quarries with sheer sides, with no way out. Stay clear of the edges. Some of the land is boggy and can also be dangerous. At the main quarry, the cliff faces are very steep and sheer. You should stay away from the base of these.

Coniston covers such a big area that it is best to take as little equipment as possible, apart from the essentials. Take food and drink too.