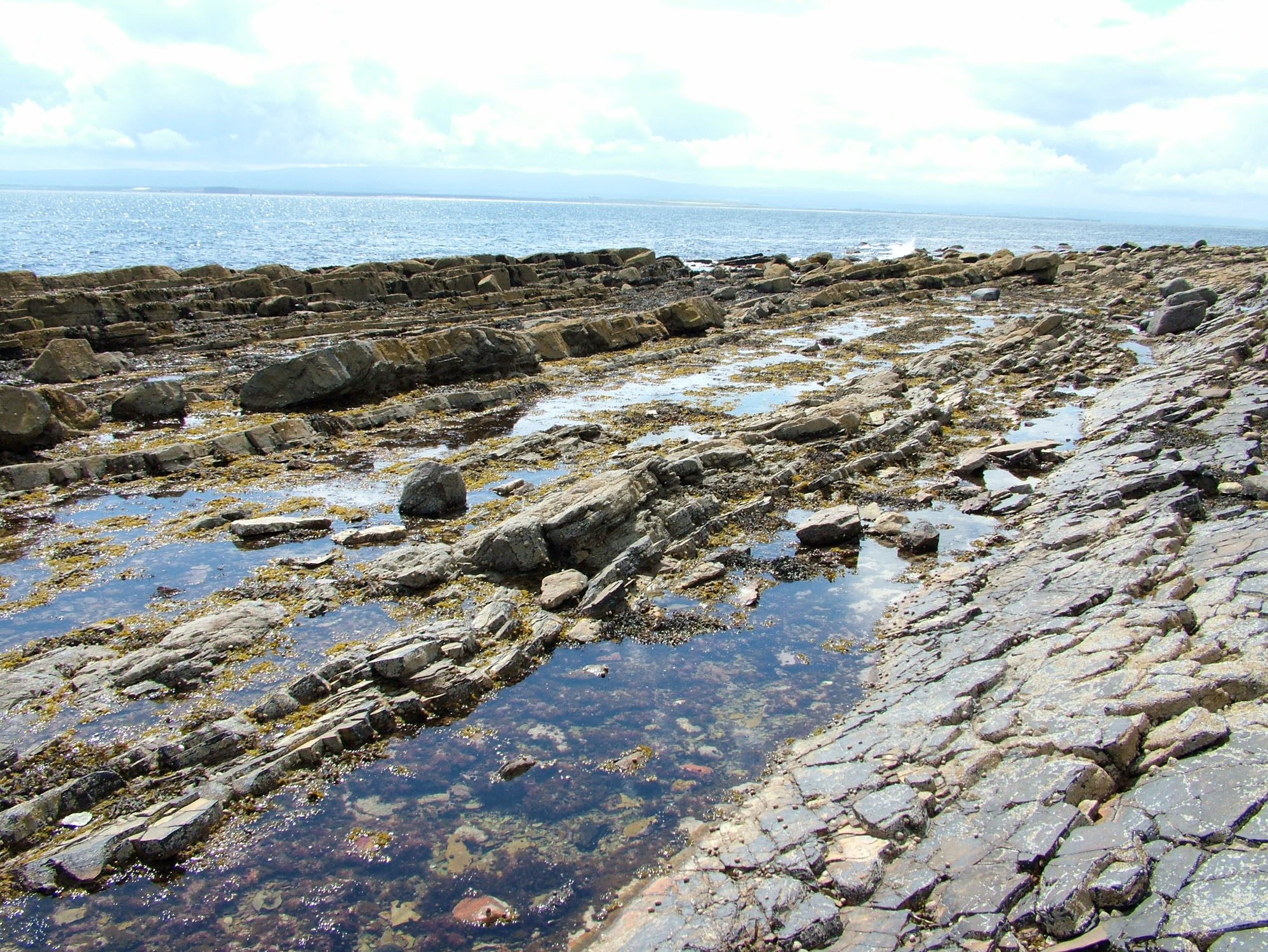 This is the official ‘Hugh Miller Trail’. Hugh Miller was one of the most important Scottish geologists of the 19th century. Ammonites and fossil fish can be found here. The footpath down to the shore was created by Hugh Miller himself.

♦ From Cromarty, take the A832 to Newton. At Newton, take a left turn down the narrow single track road towards Eathie. Follow this all the way until you reach Upper Eathie. There is a car park with a notice board explaining about Hugh Miller. Park here.
♦ Follow the footpath down to the shore. Note that this is a very long track, but does eventually get to the beach. From the fishing station, walk south.
♦ Ref: 57.63894°N, 4.05660°W

FIND FREQUENCY: ♦♦ – This is probably Scotland’s most collected site for Jurassic fossils. Therefore, it is sadly over-collected and success is dependent on beach conditions.
CHILDREN: ♦ – This location is not suitable for families, because of the long, steep walk down to the beach
ACCESS: ♦♦♦♦ – From the car park, the only access is a long walk down a steep route. The track seems to go on forever (especially when coming back and with the extra weight of rocks and fossils).
TYPE: – The cliffs at Eathie are Devonian. However, fossils are found within the Jurassic rocks exposed on the foreshore.

Ammonites are found either in shale (in which case, they are flat) or in nodules (where they are three dimensional). They can mostly be found by searching along the foreshore, south of the fishing station, and by splitting rocks.

Along the coast, south of the fishing station, Jurassic rocks can be seen along the foreshore. You need to search the boulders for any ammonites poking out and split these. You can also find ammonites in the shale.

To the north of the fishing station, the Middle Old Red Sandstone is exposed on the foreshore. Small elongated nodules are common, but only a particular zone yields fish remains. Of course, these nodules are quickly collected and so fish remains are not common.

The late Jurassic (Kimmeridgian) beds here are faulted against Devonian Old Red Sandstone and are exposed on the foreshore, south of the fishing station. The basement rock is Moinian and is over 600 million years old but most of this is obscured by the Sandstone. Other rocks to be found here are Hornblende schist, pyritic granites and granitic gneisses.

The Eathie Fishing Station site contains exceptionally well preserved fossilised remains of Mesozoic plants and marine shell-fish. The fossils are very well preserved in sedimentary rocks which formed in the Kimmeridgian period of the Jurassic around 245 million years ago when the area was a shallow sea into which plant and animal debris was washed. These layers were deposited in a marine environment and contain the fossil remains of plants, including ancient conifers and tree ferns, washed in from the adjacent land areas. The plant fossils are in such a perfect state of preservation that they allow detailed anatomical studies down to the cellular level.

At Eathie the succession consists of about 45 m of grey-green mudstone and shale with beds of sandstone and grit, some bituminous shales (oil shale) as well as some thin beds and septarian nodules of brittle blue limestone. The sediments are cut by a number of prominent sandstone sills and dykes which were probably formed during earthquakes by the intrusion of liquified sand from. The Eathie sediments are very fossiliferous with many well-preserved bivalves, ammonites, and belemnites.

North of the station, the Middle Old Red Sandstone is exposed on the foreshore and there is a cliff section with a fish bed. The rare fish fossils are found in elongated flattish nodules found north of the Fishing Station.  This Fish bed is only visible at low tide.

South of the station, the cliffs are of psammitic granulite (a hard granular quartz).

Common sense when collecting at all locations should always be used and prior knowledge of tide times is essential. The tides can reach quite high up the beach at Eathie. Therefore, ensure you return well before high tide. The foreshore can also be very slippery and rocky. Wear suitable footwear.

Most of the ammonites are found in nodules, but this site is an SSSI with no hammering permitted. However, you can split rocks loose on the beach, so you will need hammers, chisels and safety goggles.