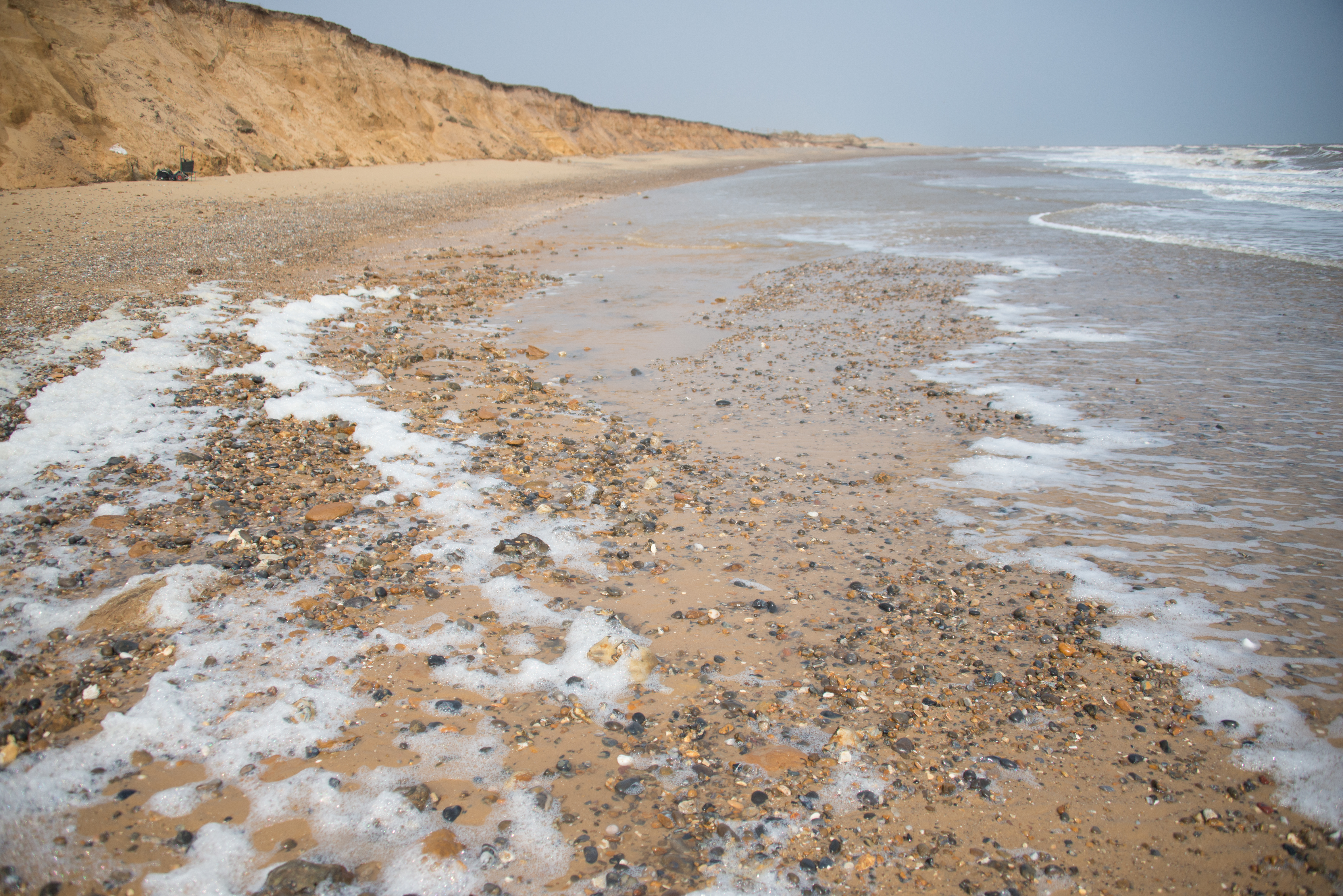 During favourable scouring conditions, Easton Wood exposes Norwich Crag shell beds along the foreshore. These are extremely rich in mammal remains and are the best preserved bones from any Norwich Crag site. Although highly productive, scouring only occurs every few years, although after gale force storms, mammal remains can often be washed ashore, lifted by the waves from the seafloor. Shell beds are also sometimes exposed in sporadic pockets along the cliff, but bones from these upper shell beds are rare.

♦ From the A12 at Wrentham, take the road to Southwold from the crossroads. You will then pass the ‘Five Bells Pub’ on the right. Shortly after the pub, take the road on the left signposted to ‘Covehithe’. Drive all the way down the road until the road reaches a corner, where it turns back on itself, with another road continuing ahead. Here, the road layout has changed. It used to take you past the church without any junctions, but, the junction has been moved, with the main road now turning back on itself.
♦ Parking is no longer permitted past the new junction layout. Instead, just before the corner, a road side parking area has been designated. There is enough space for around ten cars, between two sets of double lines. From here, walk down the road ahead of you. Before the church, you will see a footpath on your right signposted to ‘The beach’.
♦ Follow this round the field and then veer right through the wooded area. It will eventually take you to the beach. Once at the beach, the cliffs to the right with a wood on the top in the distance are the ones you need to head towards.
♦ Ref: 52.362720, 1.701078

FIND FREQUENCY: ♦♦ – Most of the Norwich Crag deposits within the cliff faces are Norwich Crag Sands. At the base of the cliff, there are occasional and sporadic pockets of shells that are not continuous. The fossil mammal bones come from below beach level. These are sadly only scoured in cycles that occur roughly every decade. Each cycle can provide a few years during which the beach will scour a couple of times a year. But even when it does scour, suitable conditions can last only a few days. Therefore, timing at this site is very important to find anything decent. Having said that, after a strong south-westerly storm, the waves will occasionally lift bones from the seafloor and deposit them along the tideline.
CHILDREN: ♦♦♦ – Covehithe and Easton Wood have lovely beaches for children. They have fine, clean sand, which, during the summer, are far better than the popular tourist beaches of Southwold and Lowestoft. However, it is a long walk down and they are in the middle of nowhere, so there are no toilets or other facilities. Therefore, we suggest that this site is good for older children, but not younger ones.
ACCESS: ♦♦♦ – Covehithe is a small hamlet that can be a little tricky to find and the walk to the beach can be long, although it is a pleasant and easy one. Parking can be difficult during the summer months, as this area is popular with walkers and the new parking restrictions only allow about ten cars.
TYPE: – The vast majority of fossils are found exposed along the foreshore, after high tides have either washed them from the seabed or from shell beds exposed during scours. Fossil shells, fish remains and bones can all be found.

At cliff level, occasional pockets of shells can be seen. These contain gastropods, bivalves, fish remains and the occasional rolled bone fragments. The beds are not continuous and can appear and vanish rather quickly in pockets that are around one metre from the base of the cliff.

Most of the accessible parts of the cliff are made up of Norwich Crag sands. It is extremely rare for fossils to occur in this bed, but they are not unheard of. One important recent find was a complete albatross wing bone discovered by A Cruickshanks, and donated to the Natural History Museum. This was the most complete specimen of such a bone found from the Pliocene in the UK.

It is the underlying deposits, below beach level, which will yield the best fossils. However, these are sadly only scoured in cycles that occur roughly every decade. Each cycle can result in a few years during which the beach will scour a couple of times a year. But even when it does scour, suitable conditions can last only a few days. Therefore, timing at this site is very important to find anything decent. Having said that, after a strong south-westerly storm, the waves will occasionally lift bones from the seafloor and deposit them along the tideline. As a result, the best chance of finding fossils here is to walk along the tideline after a storm.

If you are lucky enough to visit during favourable scouring conditions, mammal remains can be found everywhere. Local reports of a major scour during the 1960s tell of many locals taking wheelbarrows down to the beach and returning with them crammed full of mammal remains. While a deep scour down to the large mammal beds on this level has not been seen since 1960, major scours have occurred in 1990, 1993 and 2010. The 2010 scour provided an opportunity to sieve and study the beds for small mammals and it was this that yielded a new species of vole (Mimomys glendae).

Other remarkable fossils found here include bird remains, such as albatross. The vertebrate fauna of the Norwich Crag also includes abundant fish remains, including teeth and dermal denticles of sharks and rays, and also otoliths. Occasionally, pharyngeal teeth and fin spines of freshwater fish occur.

These Norwich Crag sections have also provided rich mollusc faunas. Significantly, these date from before the arrival of Macoma balthica in this part of the North Sea Basin, whereas the Weybourne Crag deposits further north date from after the arrival of this species. Foraminifera and pollen have also been collected from this site, as well as ostracods and dinoflagellates, which provide useful data for environmental reconstruction. 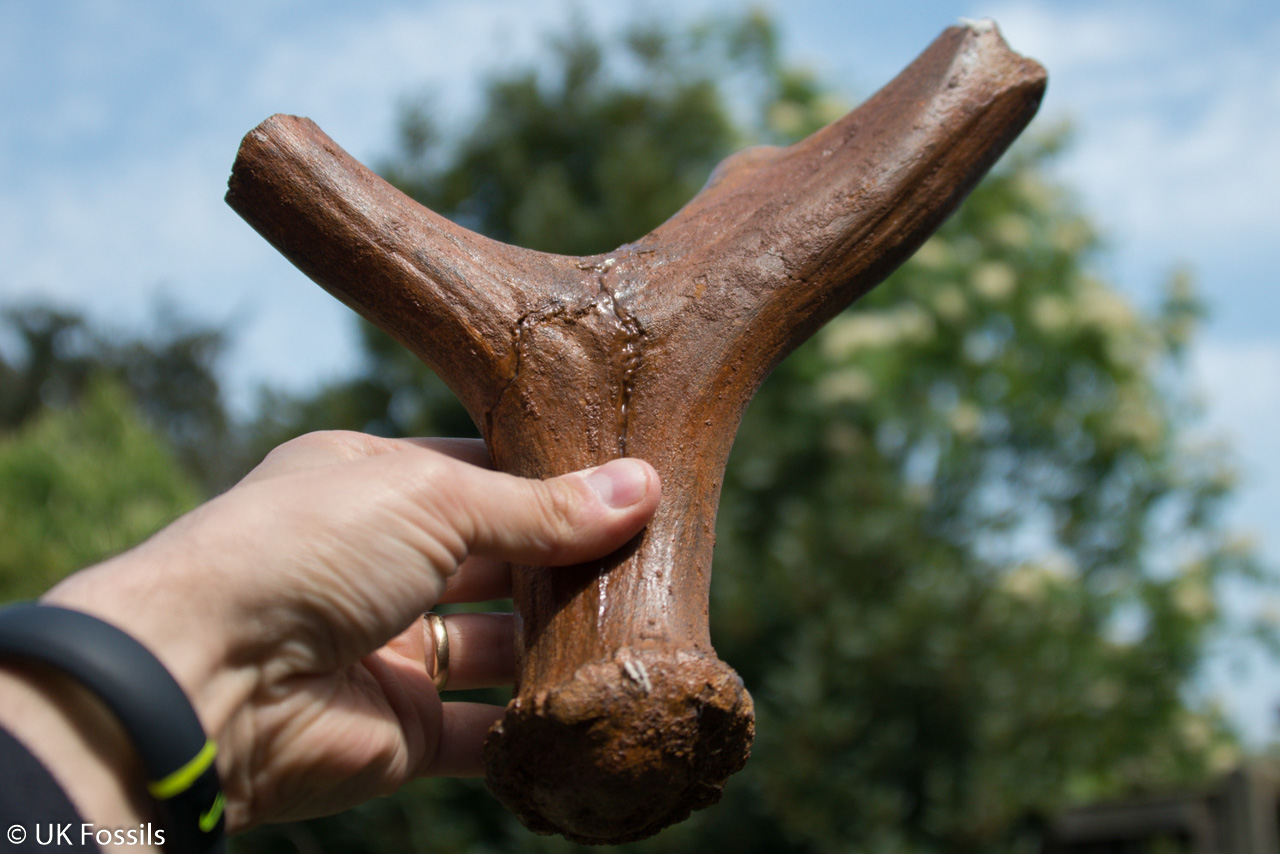 At Easton Wood, the beach lies on Norwich Crag deposits, which are sometimes exposed at low water and after scouring conditions. The deposits contain large bones and the remains of small mammals occur in shelly units. Higher up in the cliff, Norwich Crag shelly units with rolled mammal remains sometimes occur. The Norwich Crag here is estimated to be about 2.2 to 2.4myrs old (Pliocene).

At the top of the cliff, 2m to 3m of coarse brown sands and gravels, followed by 1.5m to 3m of grey-blue stiff clay with silt and sands, make up the majority of the cliff. These represent the colder conditions of the Baventian Stage. Directly below this, a thin 15cm orange-yellow gravel bed contains clasts, which marks the start of warmer conditions. The rest of the cliff contains 1.5m to 2m of yellow bedded sands. These contain sporadic shell beds towards the base, which can be found anywhere along the Easton Wood cliff, but are not continuous. The sands can very occasionally yield bones, but these are extremely rare.
It is deep below beach level, where things become more interesting. Starting just below beach level is a bed of 5cm to 10 cm of hard brown clay. This often becomes exposed as a foreshore platform, when scouring first starts. Once the sea has stripped away this hard layer, one metre of sand will still need to be removed. This can occasionally contain shells, but mammal remains are very rare in this bed. At the base of this, there is a 5cm band of black rounded flint pebbles, followed by a thin 5cm layer of clay, which is followed by the best Norwich Crag deposits of any location.

The pebble bed and layer of clay have acted as a barrier to water, which has allowed the preservation of the underlying shell beds; and this is why the shells and bones below it are in such a good condition. The main shell bed, which consists of 30cm to 60cm of highly compacted shells, is extremely rich in small mammal remains. Below this, a 5cm thin clay layer yields a number of nodules. When these are seen scattered along the foreshore, this is usually the first sign that scouring has occurred.

You have to go even further down before the larger mammals are found. Another 20cm to 40cm of shells and sands are followed by a 10cm bed of thick of flint clasts in gravel and silt. Just before the main mammal yielding bed, there are 20cm of hard cemented sands and shells. The best bed is this extremely rich, large mammal bed, with large flint clasts in gravel overlying iron cemented gravel. This is 20cm to 30cm thick and is some 2m below average beach level. 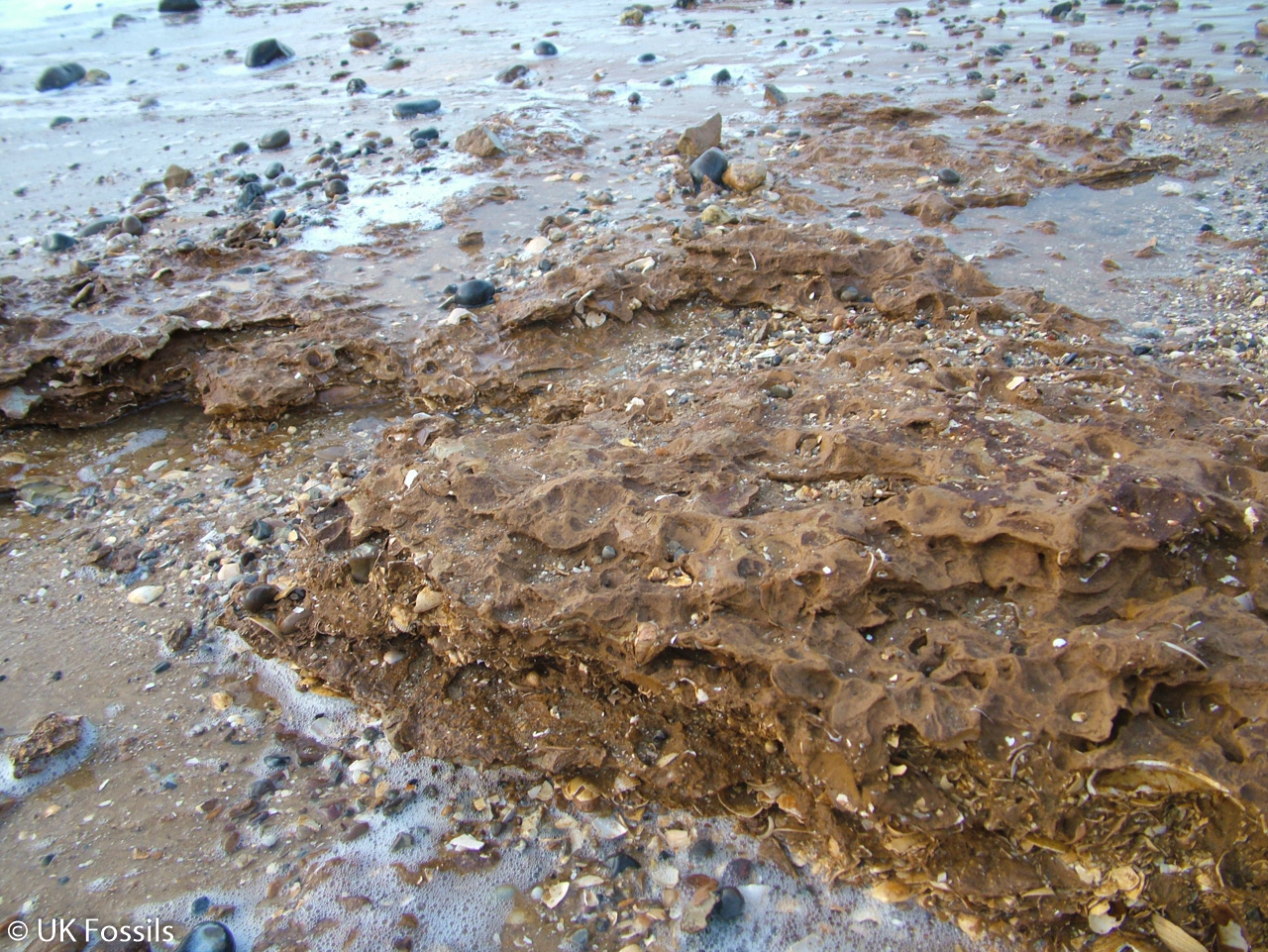 Common sense when collecting at all locations should always be used and prior knowledge of tide times is essential. The cliffs at Easton Woods are very unstable, especially during winter months. Both rainwater, which accumulates above the clay and can cause sudden cliff falls without warning, and overhanging cliffs caused by sea erosion are two reasons the cliffs are so unusable. Keep away from the base of the cliff at all times. Sinking sand after high tides can also be a danger.

Most fossils can simply be collected by picking them up off the beach. These tend to be hardened by the sea and do not require any immediate preservation. However, this site is also extremely rich in small mammal remains. Due to SSSI restrictions, to find these, you need to take a sieve and sieve onsite. A trowel will come in handy for any loose deposits that are not in situ.