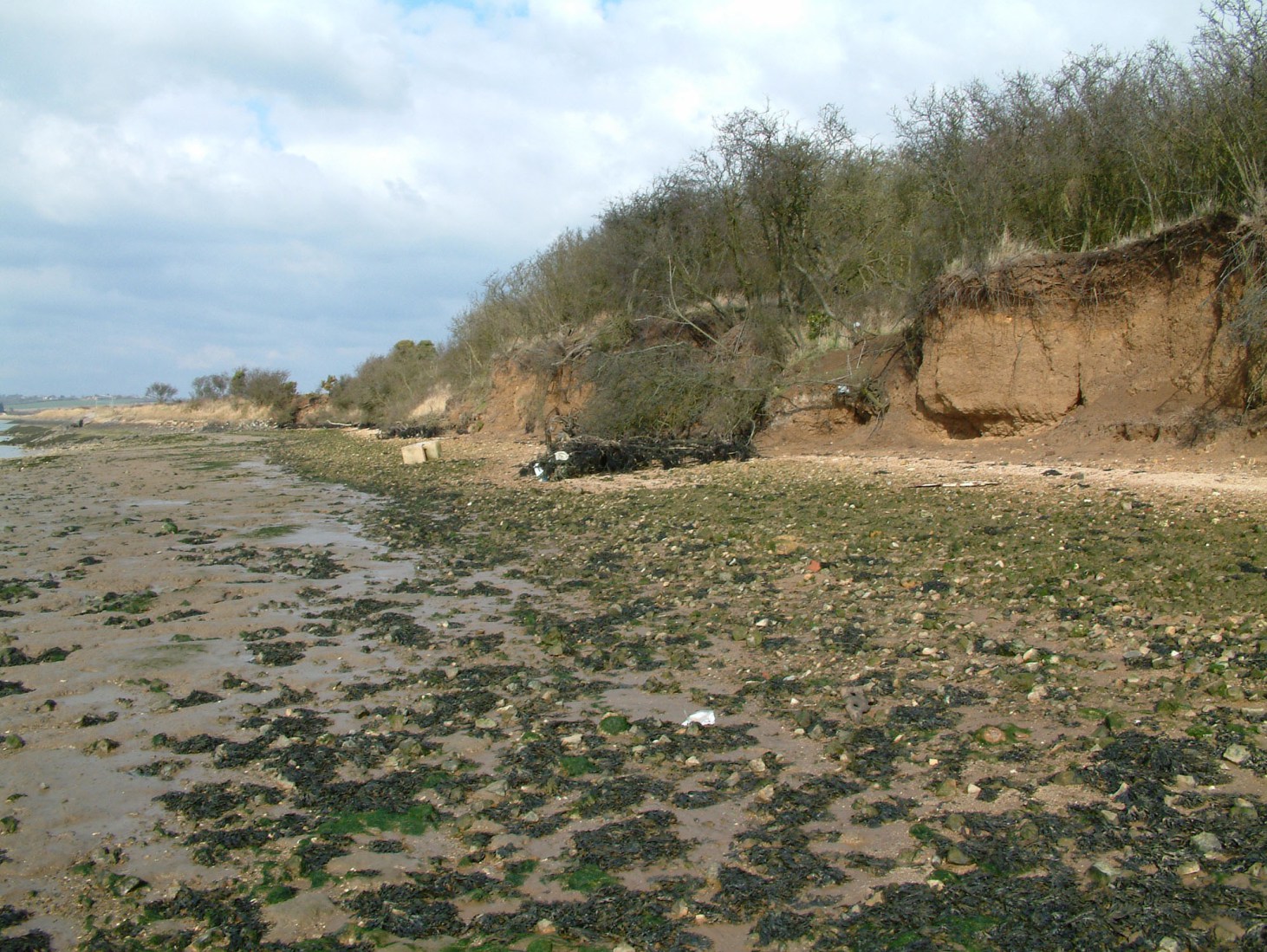 Burnham-on-Crouch has yielded an incredible variety of fossils – you just never know what you will find. There are various species of shark (with teeth and vertebrae being most common fossils), crabs, seeds, fish remains (including ray teeth) and much, much more.

♦ Head towards the marina or ferry in Burnham-on-Crouch, which are to the southwest of the town. There is car park here, although it is quite a walk to the actually site. Walk westwards along the coastal path and you will eventually get to Creeksea Slipway. You need to walk over this slipway on the foreshore. Be sure to check tide times or you could have problems getting back. Follow the path round, past the second slipway, and you will then meet the main riverbank footpath.
♦ Alternatively, you can drive to Creeksea, but parking here is limited to a specific area between November and March along the narrow road, with a complete restriction in force outside this time. There are two defined parking spaces within single yellow lines, just before the double yellow lines. If you have been lucky enough to find parking, continue by foot down the road and, after the double yellow lines, there is a public footpath. Follow this around the back of the houses and it will lead onto the main riverbank path.
♦ Follow the main footpath until you see another slipway and then a wooded area with clay exposed on the foreshore of the River Crouch. After this, tucked away further along the foreshore, are the cliffs, but collecting is best done on the foreshore in the area in front of them.
♦ Ref: 51.63369°N, 0.78178°E

FIND FREQUENCY: ♦♦♦♦ – Burnham-on-Crouch yields many fossils from the London Clay, including a lot of pyritised fossil wood. However, you will need to look hard and it is often a ‘hand and knees’ job to find anything worthwhile.
CHILDREN: ♦♦♦ – This site is not suitable for children, due to the long walk and the large amount of broken glass on the foreshore.
ACCESS: ♦♦♦ – Unfortunately, access to this site is quite poor, involving a long walk with limited/restricted parking, or an even longer walk from guaranteed parking.
TYPE: – Most of the fossils can be found on the foreshore, especially after storms or scouring conditions, but they are also commonly found at the base of the cliff in the scree slopes. Note that this is an SSSI, so you must not dig directly into the cliff.

Burnham-on-Crouch has a wide variety of fossils, including various species of shark, crabs, lobsters, seeds and other plant remains, turtles, gastropods, bivalves, worm tubes, fish remains (including teeth from rays) and much, much more.

Most of the fossils are very small, so you will need to get down on your hand and knees to search the foreshore in amongst the shingle. To find really small fossils, take a sieve with you and sieve the fine shingles in the river, or take sample bags back for sieving at home.

Larger fossils are often found among the larger rocks and stones at low tide, although searching for these can be difficult due to the foreshore being muddy and sometimes covered in seaweed.

Burnham-on-Crouch is a very popular location for fossil collecting, so it can be difficult to find anything. However, areas such as those around trees, slipways and the damaged concrete seawalls, or under rubbish on the beach, are often missed by collectors. Therefore, if you take the time to move some of the debris and/or look in these areas on the beach, you may well find fossils.

The London Clay (Eocene ~50 mya) from the Ypresian of the Eocene is well exposed. The beds dip westwards and there is a large amount of the sequence exposed.

The London Clay banks here still provide the collector with a rich assemblage of fish taxa, almost exclusively of elasmobranchs (cartilaginous fish, such as sharks, rays and skates). The tidal river cliffs and foreshore exposures reveal a section through the marine rich London Clay, Division D. The main cliff, known as ‘The Cliff’ or Butts Cliff locally, forms a 2 -3 metre thick outcrop on the north shore, which contains the fish fauna (mostly of sharks) which wash out onto the foreshore.

Large cementstone nodules from the London Clay are found here and resemble those found at Sheppey sites. However, at Burnham-on- Crouch, the concretions are largely unfossiliferous when broken open.

At the western end of Cliff Reach, the Upper Chalk is sometimes exposed on the foreshore in boulders. These can contain shells from the Maastrichtian stage of the Upper Cretaceous. This bed is directly beneath the London Clay.

Common sense when collecting at all locations should always be used and prior knowledge of tide times is essential. The main danger here is boggy areas of mud close to the river, in which people have become stuck. Keep away from these areas. There is also a large amount of broken glass on the beach, so take extra care, especially if searching on your hands and knees.

The site is good for London Clay fossils and all you really need is a good eye and to get down on your hands and knees to search in the shingle. However, knee pads may come in handy. To find really small fossils, you may wish to take a sieve.