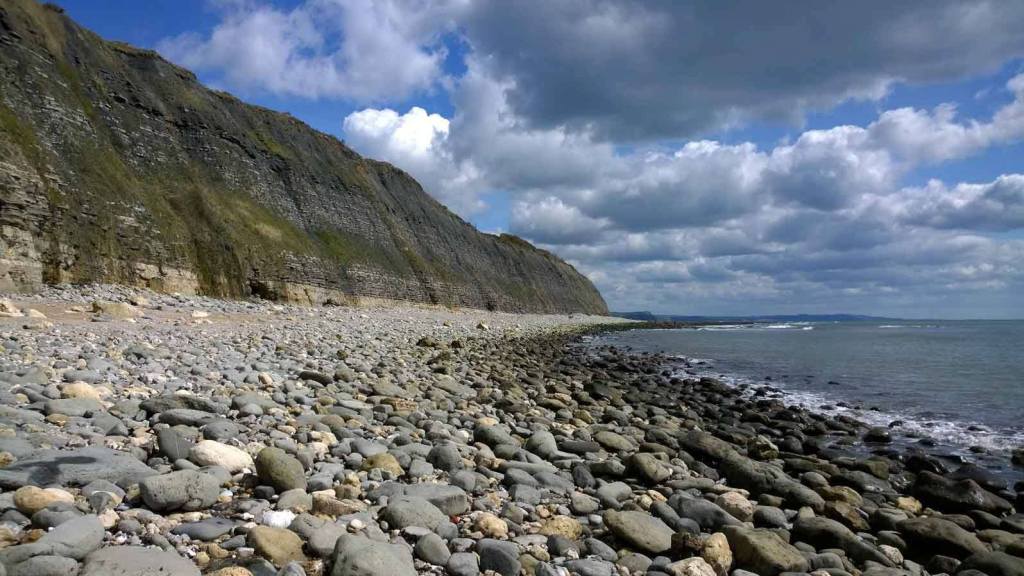 There are similar zones at Chippel Bay to those found in the Lias of Church Cliffs. Ammonites, bivalves and reptile remains can be found on the foreshore but collecting is always at its best after a good scour and stormy weather.

♦ From Charmouth, drive on the A3052 (Charmouth Road) to Lyme Regis. Drive through the town, climbing a very steep hill (Pound Road) and then veering to the left, as you exit the town centre.
♦ Whilst climbing the hill and near the top, you will see a signpost to Monmouth Beach on the left. Take this left hand turn into Cobb Road. Descend towards Monmouth Beach.
♦ There is a very large car park at the bottom of the hill (DT7 3JN). This is one of tghree operaterd by Lyme Reis Town Council and is certainly the most expensive! From here, you can walk to Chippel Bay (Monmouth Beach).
♦ Ref: 50.71955°N, 2.94310°W

FIND FREQUENCY: ♦♦♦ – Chippel Bay is famous for its highly fossiliferous cliffs. However, unlike Charmouth and Lyme Regis, successful collecting here relies more on getting the right tidal and beach conditions.
CHILDREN: ♦♦♦♦ – This site is recommended for children. The whole family can sit on the beach, walk along the foreshore or pick up ammonites and other fossils.
ACCESS: ♦♦♦♦ – The car park is very close by and has toilets and a cafe. Access onto Monmouth Beach is easy, with a relatively short walk across sand but the terrain gets more rocky and might not suit those with walking difficulties.
TYPE: – Fossils are mostly seen on the foreshore, but can also be found at the bottom of scree slopes, slippages and occasionally a cliff fall. Hammering the cliff is not permitted because Chippel Bay is part of the Jurassic World Heritage Coastline and is an SSSI site.

Bones of ichthyosaurs and other reptiles can be found on the foreshore, particularly small vertebrae. These are not common but do turn up with some frequency. Beach scouring is often needed to be successful. Most fossils come from a bed that is beneath the level of the beach, so you will not be able to find these by directly digging into the cliffs (which is disallowed, in any case). It’s useful to earch in amongst the many rock pools, rocks and boulders that are found on the beach on the tide line.

The hard limestone from the Blue Lias contains many ammonites and, sometimes, large, complete nautiluses. Many of the more spectacular fossils found here will need preparing, using an air abrader. However, there are many professionals in the town who can offer this service.

The ammonites and nautiluses can reach over 0.5m in diameter. In fact, some of the largest and best Blue Lias finds have come from Chippel Bay. However, this bed is extremely hard and a cliff fall is required to find anything. Trace fossils and worn parts of ammonites scatter the beach (especially Psiloceras and Coroniceras). Within the limestone bands, brachiopods (Calcirhynchia calcarea) and oysters (Gryphaea arcuata) can also be found, the latter with some frequency.

From the centre of Chippel Bay to Pinhay Bay, the Fish Bed, which consists of thin, laminated shale, is well exposed at the base of the cliff. In fact, there are several beds with fish remains in. However, only one of these contains the remains of whole fish. Most of the shale here is packed with fish scales but the best fish bed can be difficult to find, due to the rapid changes in beach conditions. Flat ammonites and shells can also be found. Occasional lumps of chert can be seen, which contain various fossils, including trace fossils, especially worm tubes.

To the west of the Cobb at Lyme Regis is Monmouth Beach and to the east are Church Cliﬀs. Here, the famous rocks of the Blue Lias Formation extend west to Pinhay Bay and to Black Ven, in Charmouth to the east. The distinctive cliﬀs of layered limestone and shale is present, particularly at Ware Cliﬀs. The Shales-­with­‐Beef and Black Ven Marl Members overlay the Blue Lias and can appear as loose rocks and debris on the beach. Fossil collecting should be only attempted on the foreshore, as the cliﬀs are highly dangerous and prone to sudden collapse. Stay well clear from the base of these cliffs. Extended visits to the area might require a hard hat, to reduce risk of injury from falling rocks.

The Blue Lias Formation consists of hard layers of limestones and shales and occupies much of the base level of cliﬀs around Lyme Regis and on the ledges, seen on the foreshore at low tide. East of Lyme Regis, Church Cliﬀs are a source of calciﬁed ammonites. Above the Blue Lias, the Shales- with-­Beef Member (part of the Charmouth Mudstone Formation) can be seen and consists largely of dark mudstones, with mostly crushed fossils. Above this lies the Black Ven Marl, which contains superb fossils but at Lyme Church Cliﬀs the source is conﬁned to sections that have fallen to the beach.

The Blue Lias at Chippel Bay provides an excellent opportunity to view the full succession of the Blue Lias, Beds H1-H9 of which were exposed after a large landslide and may still be seen. Below the Table Ledge, the Fish Bed follows approximately six bands of limestone. Below this is the Glass Bottle Bed, but this can be seen only during extreme scouring. (The names of the beds where given by quarrymen when the foreshore used to be quarried for building stones and cement.)

Shales with Beef and the Black Ven Marls can also be seen above the Blue Lias. The Gault Clay is mostly covered up.

The beach is also littered with Lower Cretaceous (Albian) Upper Greensand. In addition, blocks of chert can be seen, which contain trace fossils (including worm tubes) and a range of other worn fossils. The Cretaceous continues at Pinhay with what used to be known as the Upper, Middle and Lower Chalk appearing unconformably above the Lias (the Lower Cretaceous is missing). However, if you look at the beach, it seems impossible to work out where the blocks of Cretaceous rocks have come from, as there appears to be no such beds in the cliffs themselves and it would be impossible for them to be below the Lias on the foreshore. However, these Cretaceous blocks have actually come from higher cliffs inland. The coastline here has been dramatically reshaped due to a series of large landslides in the past. Almost 500m inland from the Lias Cliffs, you can find the unslipped original cliffs with the top Cretaceous rocks in place.

Common sense when collecting at all locations should be used and prior knowledge of tide times is essential. Care should especially be taken at the headland, where the sea reaches the base of the cliffs at high tide. If you venture past this point, return in good time. Care must also be taken of falling rocks. These are frequent because the alternating hard limestone and shale of the Blue Lias make the cliffs highly unstable and prone to collapse.

Collecting from the soft clays is best done using a knife, pick or trowel/small spade. However, it is possible to collect by splitting rocks, especially nodules, so you will also need a good hammer and a chisel, together with safety goggles.