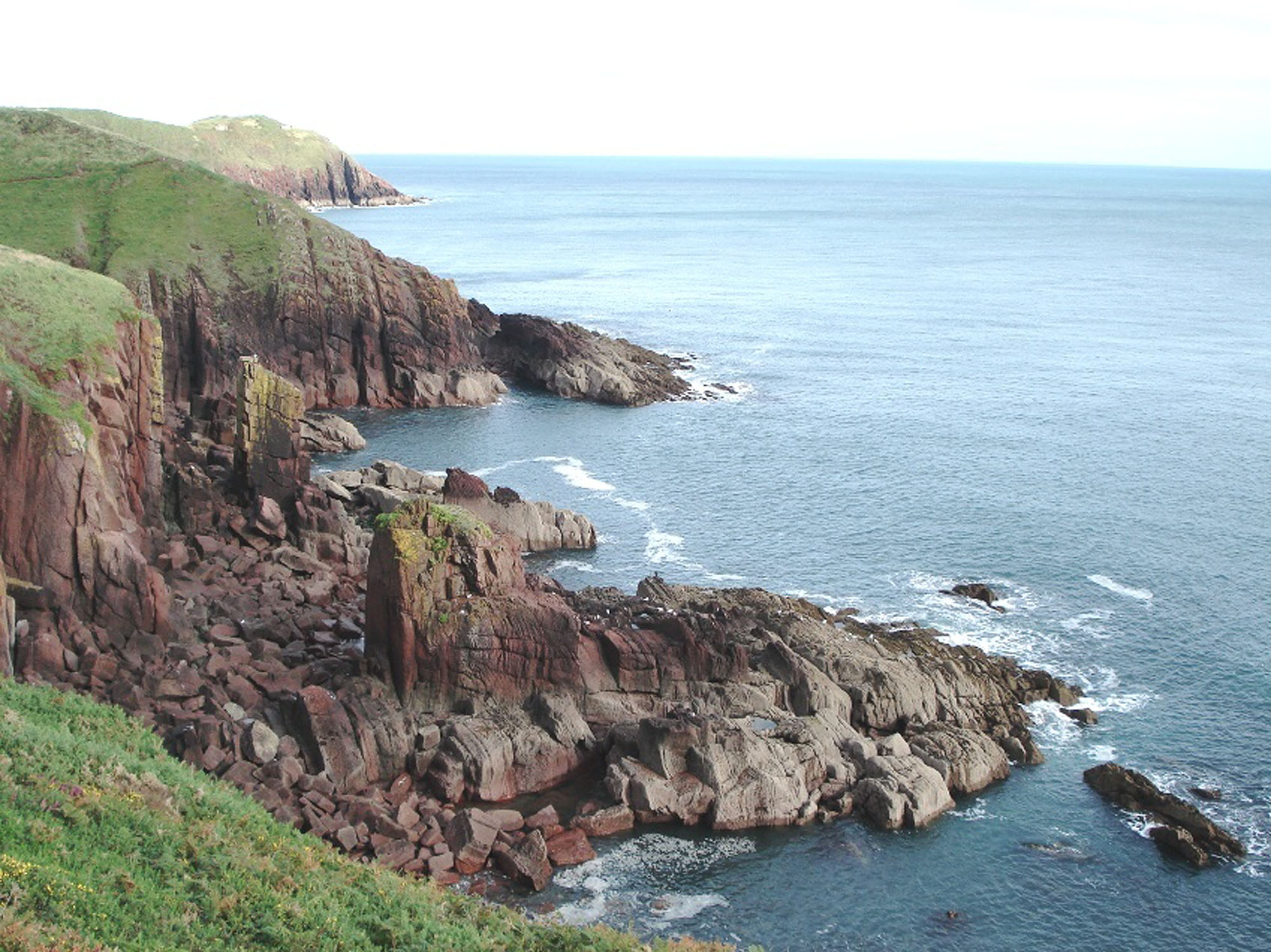 Some excellent geological features can be seen within Manorbier Bay and also from the clifftop path that leads southeast from the location. Crinoids and other fossils are abundant, and can be found in pebbles in the stream that crosses the sandy beach.

♦ There is free parking above the north side of the bay. If no spaces are available, the pay and display car park behind the beach can be used. From either parking area, the beach is a very short walk away.
♦ The stream snakes across the north of the beach.
♦ Dramatic views of the geology of the coastline can be seen by taking the clifftop path to the south of the bay.
♦ Ref: 51.64340°N, 4.80869°W

FIND FREQUENCY: ♦♦♦♦♦ – Grey pebbles within the stream contain crinoid pieces. Corals, poor quality brachiopods and other fossils can also be found.
CHILDREN: ♦♦♦♦ – The sandy beach is suitable for the whole family and is a good spot for water sports and other seaside activities. The stream is shallow and obstacle free. The clifftop path passes close to steep, unguarded parts of the coastline in places and is more suited to adults and older children.
ACCESS: ♦♦♦♦ – Car parking is found very close to the beach. The stream is shallow and the beach is sandy and flat.
TYPE: – Fossiliferous pebbles can be found among others across the whole of the back of the bay. However, they are best located when wet, as this brings out the contrast between the fossils and their matrix. Therefore, fossil hunting at this location is best carried out within the stream.

Most fossils can be collected from the foreshore near the stream and the most common can be found within the stream itself, being crinoid parts preserved in grey limestone. There are also corals and brachiopod fossils. Small pieces of bone are found occasionally within the limestone matrix and, if you are lucky, there are partial trilobites.

On a rainy day, fossils can be found along the entire width of the back of the bay, as it is easier to distinguish the fossils from their matrix when wet. On a dry day, the stream is an excellent place to look. Its bed is pebbly and practically all of the dark grey rocks it contains will have some fossils showing on their surfaces. While visiting this location, it is worth taking the clifftop path to the south and walking a few hundred meters along its length. Some spectacular views of the near vertical strata of this area can be seen within a short distance of the beach.

Those supervising young children and therefore confined to the beach are still afforded an excellent and dramatic view of the strata when looking west from the north side of the bay.

Rocks along this coastal section form part of the sequence of the Old Red Sandstone Supergroup, being from the Lower Old Red Sandstone Group . The rocks making up the headlands (Priest’s Nose on the eastern side and East Moor Cliff on the western side) and the actual bay are from the Milford Haven Group.
The headlands are specifically from the Moor Cliffs Formation, the middle of three formations that make up this group
The cliffs and foreshore in the bay itself are in the succeeding Freshwater West Formation, in which the bedding is nearly vertical, with the rocks getting younger in the northwards direction. The inner cliffs on each side of the bay are in the Conigar Pit Sandstone Member of this formation but the south-facing cliffs and wave-cut platform in the central part of the bay provide exposures of the succeeding Rat Island Mudstone Member.
In terms of chronostratigraphy, things are a little more complicated. The Townsend Tuff lies just below the Freshwater East Formation and has generally been considered to mark the Silurian/Devonian boundary, that is, the lowest part of the ORS sequence is late Silurian in agenfrom the Pridoli Stage and the rest of the rocks at Manorbier are early Devonian in age.
The Freshwater East Formation is assigned to the local Dittonian series and straddle the internationally recognised Lochkovian and Pragian Stages of the Lower Devonian.
The rocks of the Milford Haven Group are argillaceous rocks and sandstone; interbedded and formed from rivers depositing mainly sand and gravel in channels, to form river terrace deposits, with fine silt and clay which formed floodplain alluvium during the Devonian epoch. The rocks are 423 to 407 million years old.

This is a generally safe location. There is little chance of becoming cut off by the tide and the beach is popular with families. However, the clifftop walk passes some precipitous drops in places, so parental supervision is required if walking along it with children. Mobile phone signals can be lost at this location, so be sure to inform someone where you are going and what time you are likely to return.