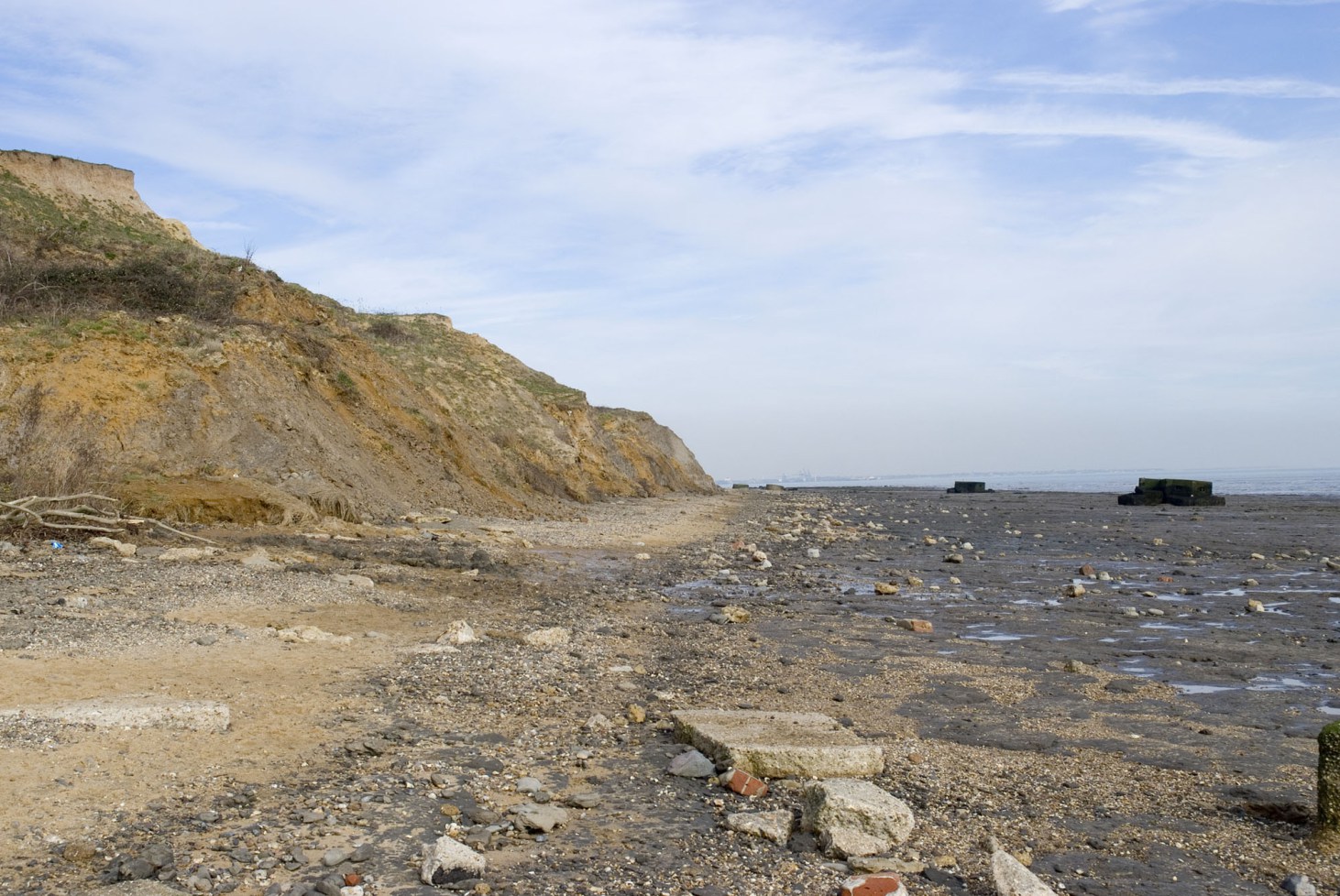 Walton-on-the-Naze is an unpredictable location, which can be highly productive one day and bare the next. It is the best coastal location for fossils from the Red Crag and is famous for fossil bird remains from the London Clay. It also while yields some of the largest sharks’ teeth in the UK (including the rare Carcharocles megalodon), together with plant remains and much, much more.

♦ Finding Walton-on-the-Naze is quite easy. Follow the road heading north through the town and, at a fork in the road, take the left hand road (Hall Lane which turns into Naze Park Road).
♦ Follow this until you reach a further fork in the road and again take the left hand road into Oldhallen Road. Follow this to the end of the road, where there is a large car park with a cafe inside the prominent ‘Naze Tower’.
♦ From here, there is a footpath with steps leading down onto the beach, near to the cafe.
♦ Ref: 51.86327°N, 1.28883°E

FIND FREQUENCY: ♦♦♦♦♦ – The section at Walton-on-the-Naze yields many fossils from the London Clay and Red Crag. However, most of these are only found during the right conditions, especially after storms and extensive scouring. The London Clay produces a large quantity of pyritised fossil wood, in amongst which you can find beautiful sharks’ teeth, often with an attractive blue lustre. However, you will need to look hard and it is often a ‘hands and knees’ job to find them.
CHILDREN: ♦♦♦♦ – Walton-on-the-Naze is suitable for families with children and makes for an ideal day out.
ACCESS: ♦♦♦ – There are good parking facilities with toilets and a cafe. However, you will need to walk down several steps to reach the beach, but the distance is not great.
TYPE: – Most of the fossils at Walton-on-the-Naze can be found on the foreshore, especially after storms or scouring conditions. Fossils are also commonly found at the base of the cliffs in the scree slopes made up of slumped Red Crag. Note that this is an SSSI, so you must not dig directly into the cliffs.

Twin or Double Room available close to Walton-on-the-Naze. Use of kitchen and garden included. Friendly dogs welcome. 10 min walk from Holland on sea’s fabulous remade beaches and cafes where mammoth bones from the dredged offshore sand are becoming commonly found. Plenty of shops, pubs and restaurants within walking distance, and ideally situated near Clacton. Plenty of things to see and do, including not only fossil hunting, but offshore Seal trips, cinema, swimming, sailing and some fabulous walks.

The Red Crag yields a wide variety of shells, fish fragments, sharks’ teeth and the occasional bit of bone. The shells are very fragile, so extra care should be taken extracting and getting them home. Small mammal remains, including voles, can also be found, but these are normally found by wet sieving using a mesh of 0.5mm

The majority of the fossils at Walton-on-the Naze can be found in areas of shingle and pyrite, in which fossils become trapped. As a general rule, the more pyrite that can be seen, the greater your chances are of finding fossils. However, they can be picked up anywhere on the beach. Look carefully and get down on your knees. In addition, light coloured nodules containing lobsters, crabs and bird bones, among other things, are not uncommon, but are generally only found after scouring tides or storms. The beds that these fossils come from is below beach level and, therefore, it is more likely these will be washed up on the beach or found during extremely low tides, than found in situ in the foreshore clay.

As a result of new sea defences at the beginning of the section, fossils are rare at the start of the walk. However, northwards from some large concrete blocks, it becomes much more productive (but becomes decreasingly less productive as the cliff height decreases). The bird bones and nodules containing lobsters and so on are mostly found at the far end of the cliffs. Bird bones can be found by taking home samples of London Clay to sieve.
Look out for pockets of fossil pyritised wood, as fish remains and small mammal remains can often be found trapped in amongst the pyritised fossil wood. This is also where most of the sharks’ teeth are found.

Walton-on-the-Naze is now the best coastal location in the UK for Red Crag, ever since Bawdsey became heavily protected by sea defences, which has caused it to become very overgrown. Here, beyond the new sea defences (where you will find information boards on the local natural history), there is no such protection, so regular erosion keeps the Red Crag on view. This frequently slumps and can often be seen at the base of the cliff. While climbing the cliffs is not recommend and digging in the cliffs is banned due to SSSI restrictions, shells can be found in the slumped scree slopes and, in many cases, these are in a much better condition than any you would find in the main face of the cliff. Rainfall also plays its part, doing all the natural sieving for you.

At the top of the cliffs, the Red Crag (Pliocene ~3 mya) can be seen. Within this are shell beds that are rich in fossils. These were laid down during the late Pleistocene, between 3.2 and 2.4mya. However, a few of the fossils have been reworked from earlier (and now completely missing) Miocene beds, including the very rare Carcharocles megalodon. The Red Crag is common in Essex and South Suffolk, but Walton boasts the best exposures, which is why the site is an SSSI.

At the base of the cliff is London Clay (Eocene ~50 mya). This is from the Lower Eocene, from the Blackheath Beds, which are around 53.6myrs old.

Common sense when collecting at all locations should be used and prior knowledge of tide times is essential. The main danger at Walton-on-the-Naze is being cut off by the incoming tide, as the steps down to the beach are always inaccessible at high tide. In addition, beware of cliff falls and landslides, as these often occur. Climbing the cliff to reach the shell beds should be avoided at all times as this is an SSSI. However, shells can be collected from the slumped material, but if you do climb on this, be careful of soft areas in which you can become stuck.

Walton is good for both London Clay and Red Crag fossils. All you really need is a good eye and to get on your hands and knees to search in the shingle. Knee pads will come in handy, as would a small trowel or knife to extract shells. As the shells from the Red Crag can be very fragile, tissue paper and Tupperware boxes are useful for getting them home in one piece.