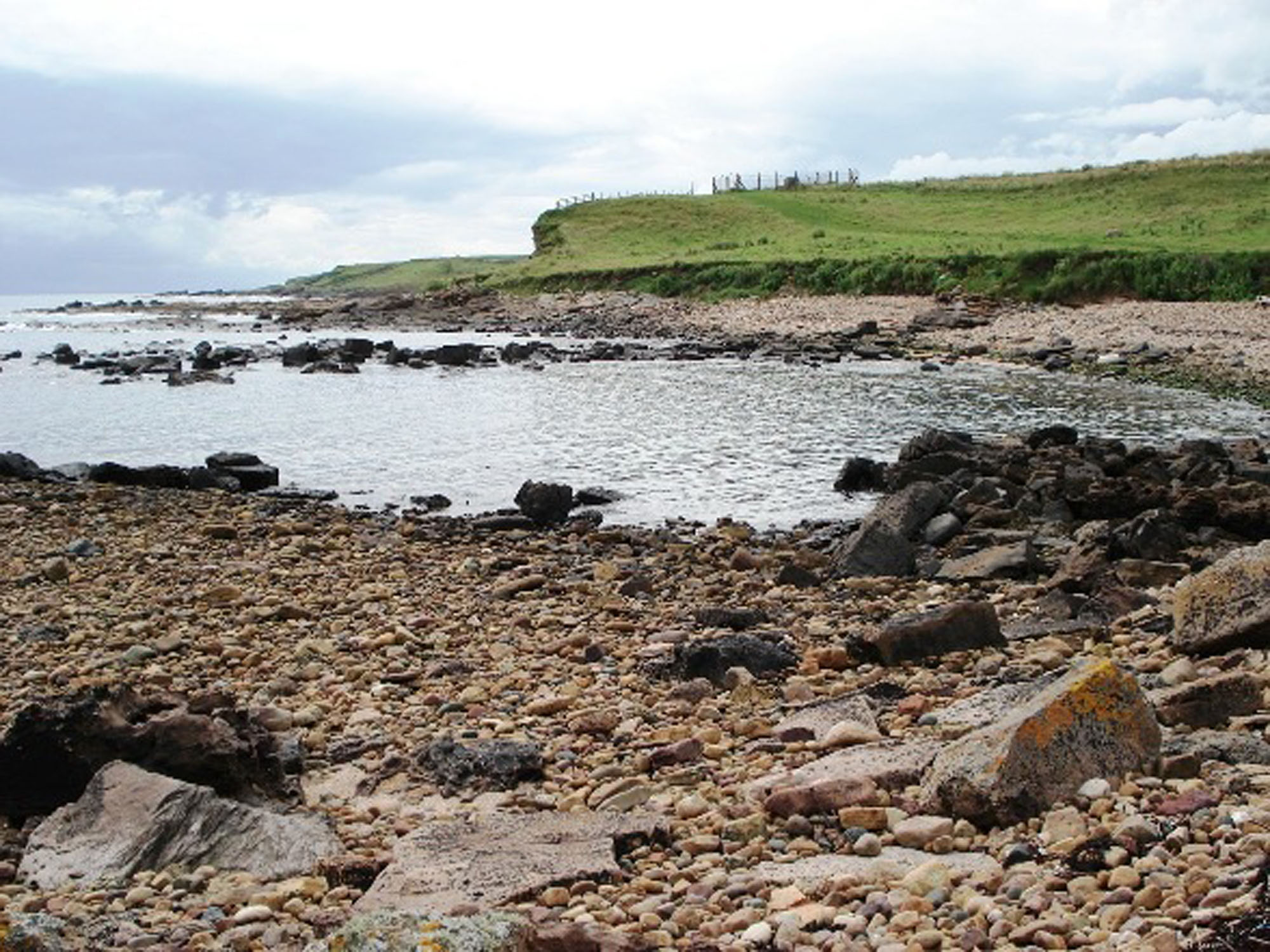 Giant millipede tracks, tree trunks in life position and many other fossils can be found to the southwest of the pretty fishing village of Crail.

♦ There is plenty of free parking to be found along the numerous streets close to the harbour at Crail.
♦ Once parked, walk towards the harbour and then onto the beach.
♦ Follow the beach southwest towards Anstruther.
♦ Ref: 56.25748°N, 2.62758°W

FIND FREQUENCY: ♦♦♦ – There are lots of fossils to see at Crail. However, most of the specimens encountered cannot be collected and the site is a SSSI, but the location is still well worth a visit, with those fossils on show being truly spectacular.
CHILDREN: ♦♦♦♦ – There are some areas at Crail where the going may be tough for younger children, but, with supervision, older children should be able to manage. For younger children, there is a nice sandy beach and, for older folk, there are plenty of tea rooms in the village itself.
ACCESS: ♦♦♦ – The beach is not far from the village of Crail, but to get to most of the fossiliferous areas, you have to climb over some rocky patches and onto some fairly large sandstone platforms.
TYPE: – The majority of fossils to be found at Crail are seen on the bedding planes of outcropping sandstone. Loose fossils can also be picked up among the smaller rocks on the beach.

This site is a SSSI. It is illegal to remove in situ material or hammer the bedrock.
Tree fossils are abundant at Crail. Check the sandstone bedding planes for evidence of tree trunks and for Stigmaria ficoides roots, of which there are plenty. In fact, there is a large tree trunk, about a meter in diameter, to be seen among the boulders at this location. This is still in its life position.

A number of tracks from the giant Carboniferous millipede relation, Arthropleura, can also be seen. They are approximately 40cm across and extend for a few meters. This was one seriously big creepy crawly.

The southern shoreline at Crail consists of Pittenweem Formation, formed 331 to 335 Mya, during the Asbian Substage. The rocks comprise mudstone and siltstone, with thin beds of limestone and dolomite; sandstone is subordinate, with non-marine origin dominant over marine. They are part of the Strathclyde Group.

North of the harbour, the rocks are from the Anstruther Formation of the same age. The rocks comprise mudstone, siltstone and sandstone in thin cycles with thin beds of limestone, dolomite and coal.

Be careful when climbing over the rocky ledges and boulders. There is little chance of becoming cut off by the tide here, as the cliffs are generally low and there is a coastal path behind the beach.

Most fossils can be found by searching the foreshore and splitting rocks and boulders.