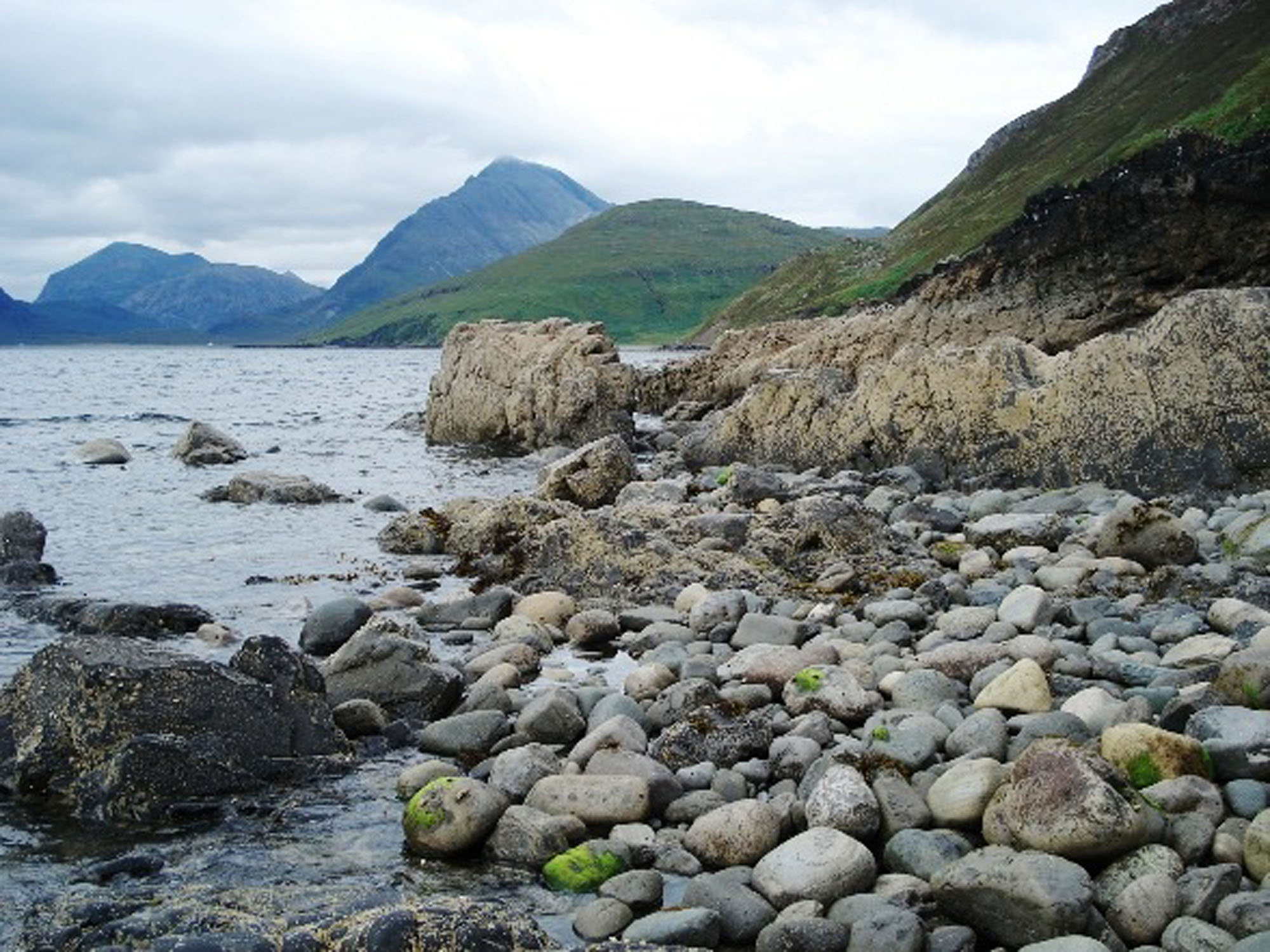 Elgol offers beautiful scenery, with a view of the Black Cuillin rising 3,000 feet straight out of the sea, and the guarantee of finding fossils. The sheer number of bivalve fossils crammed into certain layers of rock here is staggering.

♦ Park at the car park next to the harbour. At peak times, this can be busy. If so, you can often find parking space outside the village shop.
♦ Walk along the beach to the north and around the headland. Carry on into the bay and start looking for pebbles, cobbles and boulders containing fossil bivalves.
♦ Ref: 57.14671°N, 6.10360°W

FIND FREQUENCY: ♦♦♦ – When the right type of rocks is found, they are absolutely jam-packed with Cyrena sp. bivalves. Belemnite fossils and occasional ammonites can also be found.
CHILDREN: ♦♦♦ – The bay where blocks full of fossil bivalves can be found is a fairly short walk away from the harbour, where cars are parked. To get there, you must climb over some rough terrain, so this location is not suitable for smaller children.
ACCESS: ♦♦♦♦ – Parking can be found next to the harbour, adjacent to the beach. A walk of about 400m is required to reach the blocks packed with bivalves. Most of this walk will be over cobbles and pebbles, but, in one area, a rock platform and boulders must be crossed. This has numerous gullies, so some scrambling up and down is necessary.
TYPE: – Large blocks can be found at the base of the cliffs. Smaller cobbles and water-rounded pebbles packed with fossil bivalves are also present.

This site is an SSSI, so hammering the bedrock is strictly prohibited. Only collect from the loose pebbles and boulders.

There are many boulders and rock outcrops to climb over to find them. However, this is not particularly recommended. The ammonites are of a rather poor quality at Elgol and belemnites are commonly found at other locations on Skye.

The most spectacular bivalve-packed rocks are seen at the base of the cliff towards the north of the bay. To find smaller blocks containing these fossils, search through the cobbles and pebbles in front of this area. Trace fossils on bedding planes can also sometimes be seen here.

If you carry on from the bay, you can see fossil dehydration cracks on some bedding planes. Belemnites can be found further along the coast in large sandstone boulders and a little further along, a few ammonites can be found in similar sandstone boulders.
Large blocks unbelievably full of Cyrena sp. bivalves are the attraction at this location. These are best left where they are, as they are far too heavy to be removed. There are also plenty of smaller blocks containing the bivalves. If you are lucky, you may also see very intricate trace fossils on the bedding planes of some boulders. Fossil dehydration cracks can also be observed in places. Further along the coast, belemnites can be found in some abundance and occasional ammonites can be seen on the surfaces of large Oxford Clay sandstone blocks.

The rocks at Elgol are Bathonian in age (170myrs old).

Sandstone blocks can be found along the foreshore, and can contain ammonites and belemnites.

Be careful when circumnavigating boulders and rock outcrops. Wear shoes with a good grip and avoid areas that have seaweed covering them. If you carry on past the bay with the bivalve fossil blocks, the going gets very tough in places and it is possible to become stranded by a rising tide. This location is fairly remote and a mobile phone signal is unlikely to reach you. Therefore, make sure someone knows where you are and what time you expect to be back.

A big hammer is necessary, as the rocks here are large and very hard. Some smaller rocks can be found, but a lump hammer is required at the very least. A sledge hammer is perfect and a camera, a necessity.