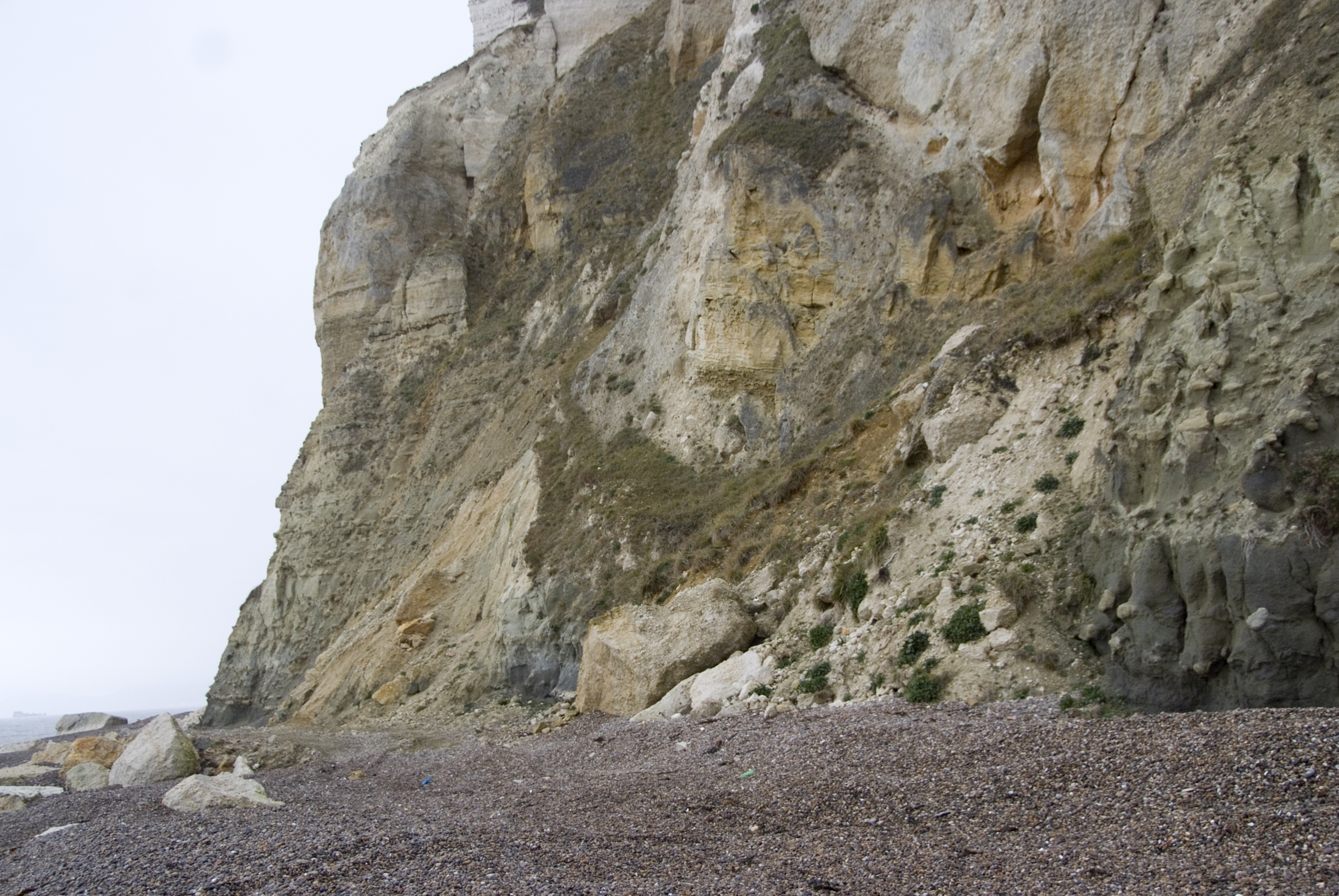 The chalk at Beer Head is very hard, unless you are lucky enough to find boulders on the foreshore from the softer beds at the top of the cliffs. There are a huge variety of echinoid species to be found here and the location is also well known for ammonites, brachiopods and bivalves.

♦ The beach at Beer Head itself is not accessible. Therefore, you need to head to the southwest of the main town of Beer and then head towards ‘South Down Common’.
♦ Here, you will find a large car park, where you can gain access to the beach.
♦ Note that there is a significant descent to the beach from here.
♦ This location is not suitable for children as it is too dangerous.
♦ There are no restrictions for collecting fossils here or using hammers.
♦ Ref: 50.69337°N, 3.09315°W

FIND FREQUENCY: ♦♦♦ – Most of the best fossil bearing beds are high up in the cliffs and boulders on the foreshore from these are limited. The lower beds are much harder. However, potentially, there is lots to be found, especially after a cliff fall.
CHILDREN: ♦ – This location is not suitable for children as it is too dangerous.
ACCESS: ♦♦♦ – There is a large car park with toilets on the western side of Beer and you can park here. Note that there is a significant descent to the beach from here.
TYPE: – Most fossils are found in the fallen blocks from the cliffs, which can be seen on the foreshore and at the bottom of the cliffs.

Fossils at Beer Head are mostly found in the boulders that have fallen from the upper beds (the White Chalk Subgroup, previously Upper and Middle Chalk). The Grey Chalk Subgroup (previously Lower Chalk) is very hard and, although ammonites and brachiopods can be found, they are hard to get out. In addition, the ammonites are fragmentary and are generally poorly preserved and quite fragile.

Fossils from the White Chalk Subgroup Chalk are often superbly preserved and fairly easy to extract. The best blocks to search in are those that have been sitting around a while, as the harder fossils weather out of the softer chalk, making them easy to spot.

Keep an eye open for loose echinoids along the foreshore, which have been washed out. However, they can be hard to spot. The Upper Greensand here is sometimes exposed on the foreshore and is rich in fossil brachiopods, oysters and bivalves. Ammonites can also be found in this layer.

The top of the cliff at Beer Head forms the most westerly outcrop of Lewes Nodular Chalk from the White Chalk Subgroup. Most of the zones are nodular. Echinoids, such as Micraster cortestudinarium, Holaster and other micrasters, can be found in these nodules, together with flints. The chalk at Beer Head is Upper Cretaceous, being Santonian in age.

The old “Middle Chalk’ now the Seaton Chalk Formation of the White Chalk Subgroup, is represented at Beer by a thick section of Turonian aged Chalk, including the Terebratulina lata and Inoceramus labiatus zones. This massive white chalk which, unlike the development of this zone in south-east England, contains numerous courses of black nodular flints. Near the base, the bed is about 4m thick in places and yields Inoceramus and other shells.

The lowest section of the cliff is comprised of the Grey Chalk Subgroup, which is part of the Beer Head Limestone Formation, often referred to as the Hooken Nodular Limestone Member. This is Cenomanian in age.

Although not always exposed at the eastern end, the Upper Greensand from the upper part of the Lower Cretaceous (Albian) can sometimes be seen on the foreshore during scouring or at the very base of the cliff.

Common sense when collecting at all locations should be used and prior knowledge of tide times is essential. The two main dangers at Beer Head are from falling rocks and the tide cutting you off. The cliffs are extremely tall and cliff falls are quite common. Therefore, you should keep away from the base of the cliffs and wear a hard hat. In addition, the sea often reaches the base of the cliff.

Most of the rocks are very hard and you will need a good hammer, chisel and safety goggles.

This site is an SSSI. This means you can visit the site, but hammering the bedrock is not permitted. For full information about the reasons for the status of the site and restrictions please download the PDF from Natural England – SSSI Information – Beer Head