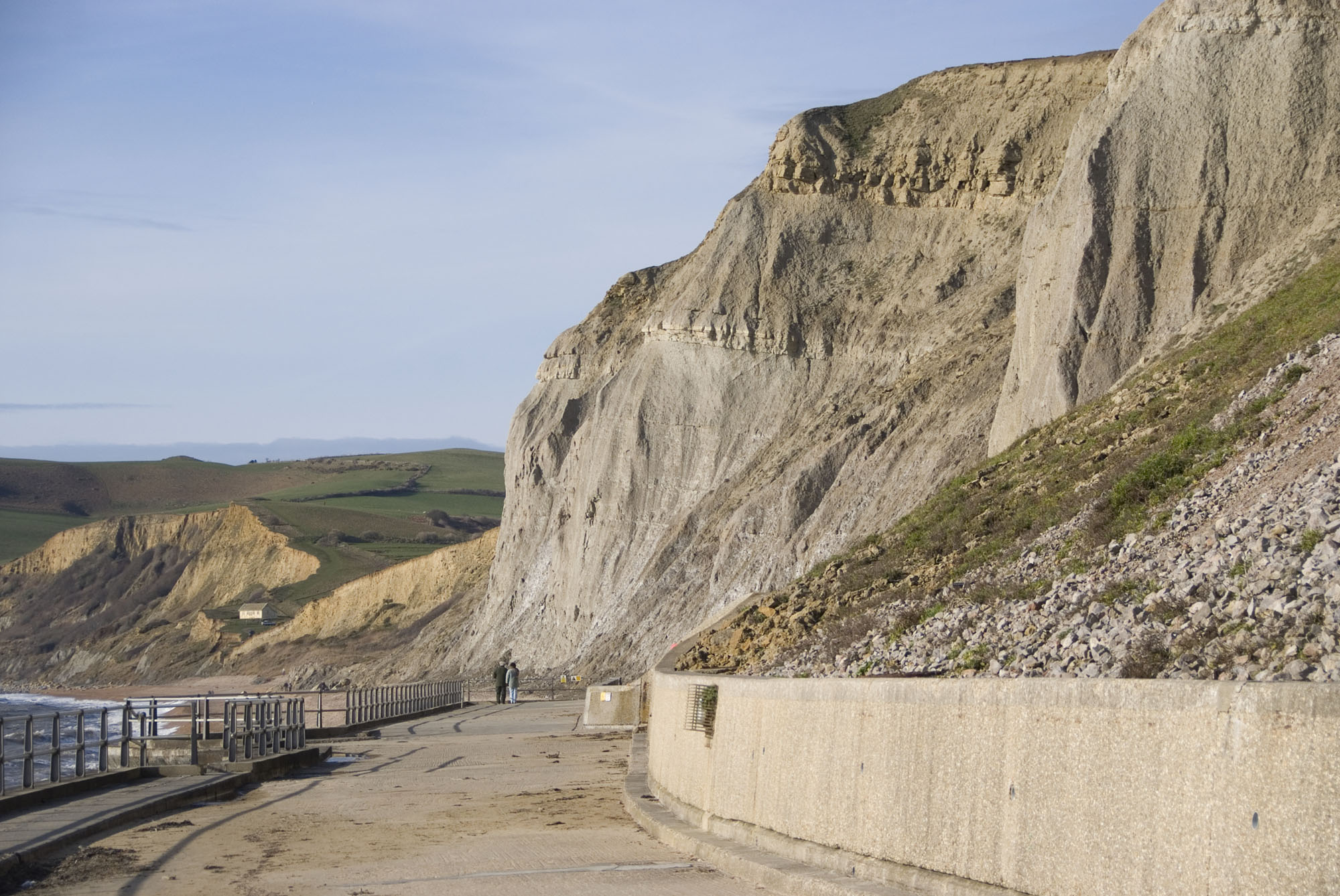 Watton Cliff, part of West Cliff at West Bay is an excellent location for collecting microfossils. While the site is also very rich in other fossils (such as brachiopods, crinoids, fish, sharks’ teeth, crocodiles, amphibians and plants), this guide concentrates more on the microfossils, including small mammals, fish, reptiles and ostracods, which are well preserved and abundant.

♦ Follow the narrow road from the A35. This is just west of Bridport and leads through the village of Eype. There is limited parking here near the shore, otherwise it is possible to park in a field. This road is not suitable for large vehicles, such as buses or coaches.
♦ From here, walk east along the beach until you reach Watton Cliff.
♦ It is quite dangerous to access this location from West Bay. Many people have injured themselves trying to access the beach from the rocks at the end of the promenade, so take care!. Eype is a much better access point and one which we recommend.
♦ Ref: 50.71271°N, 2.77215°W

FIND FREQUENCY: ♦♦♦♦ – This location is highly rich in microfossils. It has a very diverse range of fossil types and species. Besides microfossils, brachiopods (mostly from the Frome Clay) are the most common, with a diverse range of fossils from the Forest Marble, including crinoids, plant remains, fish, sharks teeth, crocodiles, amphibians and reptiles.
CHILDREN: ♦♦♦♦ – This location is only suitable for children if visiting from the Eype and not from West Bay. Although this guide concentrates on microfossils, children should easily be able to find brachiopods from the Frome Clay, which has slipped and is often exposed along the foreshore.
ACCESS: ♦♦♦♦ – Accessibility to the Watton Cliff is easy if you drive to Eype and walk east along the beach. And the walk to the site is not too far. However, we do not recommend the route from West Bay, as access to the beach is difficult, and, in the past, people have slipped and injured themselves on the rocks.
TYPE: – This is a cliff and foreshore site. Care should be taken. The high cliffs, are unstable, particularly after inclement weather.

The grey cliff of Middle Jurassic (Bathonian) Frome Clay, a light grey calcareous mudstone, which is mostly unfossiliferous, however, a conspicuous band is the Boueti Bed, which contains the brachiopod Goniorynchia boueti. This marks the base of the Forest Marble but is not easy to access. 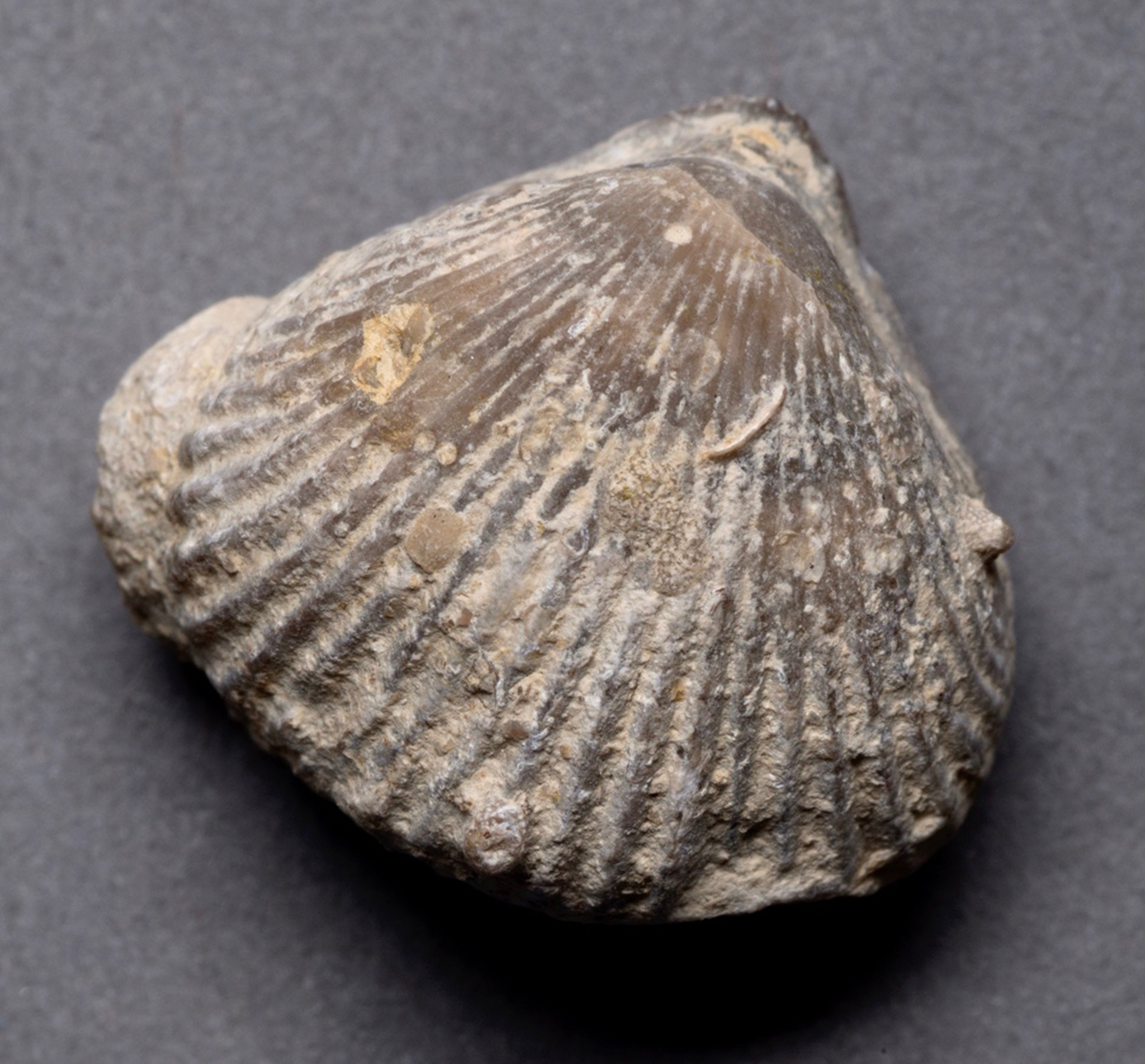 Fallen blocks of limestone are from the overlying Forest Marble Formation and are relatively fossiliferous. At the end of the grey clay cliff (heading westwards) there is a recess known as Faults Corner, where the major Eypes mouth Fault upthrows Liassic strata and from where blocks of Beacon Limestone Formation can be seen on the beach and from which fossils may be obtained.

The Frome Clay at Watton Cliff is mostly composed of Upper Bathonian calcareous clays and mudstone. The overlying Forest Marble Formation is marked at its base by the Boueti Bed, containing the brachiopod Goniorhynchia boueti. The Forest Marble here is also Bathonian in age and appears more as a grey, sandy calcareous mudstone than a limestone.

Fossils at Watton Cliff are found when processing samples of Forest Marble, which can be found on the foreshore. The cross- bedded limestone of his formation is brown, ferruginous and shelly, which can often be seen as fallen blocks on the foreshore and can be full of small oysters

The beds beyond Faults Corner are further described in the Eype section of this website..

Microfossils are mostly found in the soft, sandy beds from the Forest Marble. These are orange in colour and crumble in your hands, although many other beds yield small fossils, such as mammals, reptiles and so on. Since the Forest Marble is found at the very top of the cliff, you need to search the blocks of fallen material at the base of the cliff. Brachiopods and corals can also be found from the underlying Frome Clay, but these are uncommon.

Although the cliff-top exposures look fairly thin, they are actually the most complete section of the Forest Marble Formation found in Dorset. The section is about 25m thick, but only two beds are good for microfossils. Bag up your samples in heavy duty bags, but make sure you write on them which bed the samples are from and make a note of any important information.

The best way to process your samples is to break them down with acid. This will separate the fossils. If this is not possible, then the material is actually quite soft and small pieces can easily be crumbled in your hands. This method may cause some fossils to become damaged. Strong acid can be hard to source these days due to strict regulations on selling it, but white vinegar may be a decent substitute.

Larger lumps can be broken into smaller pieces using a small hammer. Once you have the sample broken down, use water to wash the sediments and remove any sand. Ideally, you should use a sieve and wet-sieve the samples at 500, 200 and 150 microns. Sieves can be purchased from our shop. You will then need a microscope to view your finds.

Common sense when collecting at all locations should be used and prior knowledge of tide times is essential. Care should be taken of tides at all locations and, at Watton Cliff, the tide often reaches the base of the cliff. Therefore, it is easy to get cut off. To reach the cliff, you will need to climb down the rocks at the end of the promenade, so care must be taken while doing this.

For collecting microfossils, you will need to take samples back home to process and then view under a microscope. Therefore, you will need sample bags to collect the samples and a pick to break apart the relevant beds. You will also need a sieve later for processing these and something in which to store your microfossils.