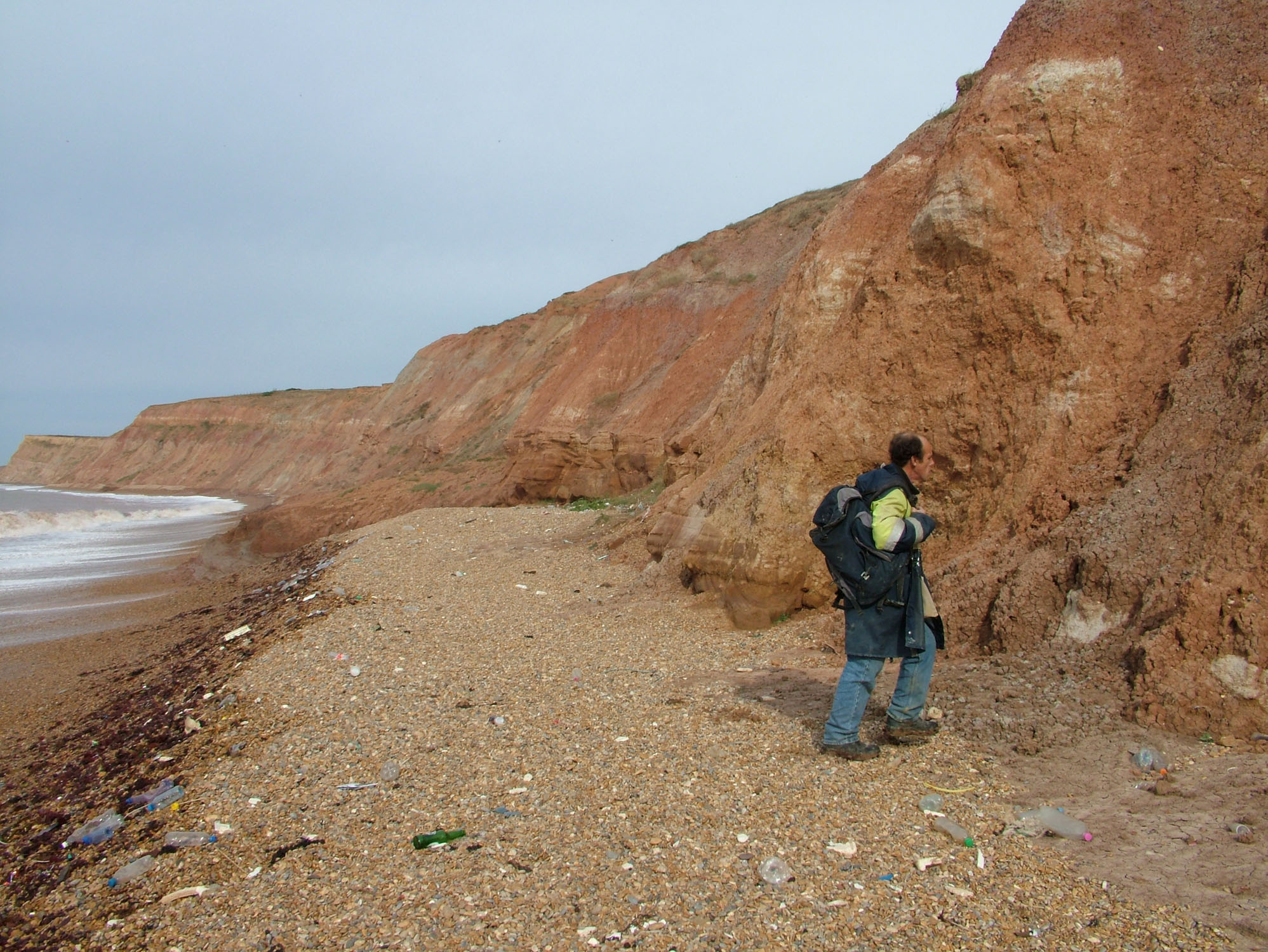 Brighstone Bay is famous for the partial sauropod skeleton found by Portsmouth University, and reptile and dinosaur remains are often found along this coastline. Barnes High was also featured on the live television programme, ‘The Big Dig’.

♦ Parking is limited. You will also need to park on the grass verge next to the road. Be aware that this is a very busy road.
♦  From here, there is a footpath down to the beach. You can then walk right, once you reach the shore. The walk may be unsuitable for some people.
♦ Ref: 50.61642°N, 1.37180°W

FIND FREQUENCY: ♦♦♦ – Although lots of fossils can be found, you will often need the right conditions.
CHILDREN: ♦ – Brighstone Bay is not suitable for children.
ACCESS: ♦♦♦ – Brighstone Bay has limited parking and there is a fair walk to the beach.
TYPE: – Most of the fossils are found on the foreshore. You simply pick them up, but they can also be found in the cliff.

East of Grange Chine, there is a plant debris bed. This bed contains plant remains, but also contains dinosaur, reptile (including crocodiles) and fish remains. Dinosaur and reptile remains can be found along the whole of Brighstone Bay, mostly on the foreshore in the areas of single, or exposed during scouring/cliff falls, or in the scree slopes. Most of the fossils can be found during scouring conditions, but they can often also simply be picked up out of the clay. Dinosaur and other reptile remains can be found along this coastline. You will need to examine the foreshore, especially in the shingle, and look in the scree slopes of the cliff. Bones and teeth can also be found in the plant debris bed. This bed is hard and full of plant remains.

Brighstone Bay is about 9 km. long and extends from Hanover Point to Atherfield Point. It is mainly of Wealden strata and is a notable area for collecting dinosaur bones.

The Wessex Formation consists of red mudstones with some interbedded sandstones laid down in a freshwater and floodplain environment. The Wessex Formation is internationally famous for its included saurian remains, including some forms unknown from anywhere else in the world.

The Vectis Formation consists of grey mudstones, deposited in a shallow water lacustrine to lagoonal setting, with some evidence of marine influence, showing evidence of fluctuating salinities. The type section for the Vectis Formation is in Brighstone Bay. The section at Brighstone Bay, places the lower boundary at the base of “red sand with bones” (the ‘Hypsilophodon Bed’). This bone bed, comprising a red siltstone but is now considered as being several metres below the base of the Vectis Formation formation and from which bones of Hypsilophodon, a small ornithopod dinosaur, have been found.

Common sense when collecting at all locations should be used and knowledge of tide times is essential, because tidal conditions at this location are dangerous. You must return before the tide turns and must check out tide times before you visit. It is very easy to become cut off.

You must also take care if walking over the slippages, as these can be very sticky and you may get stuck.

Most of the fossils can be picked up off the foreshore, without the need of any tools. However, it is best to take a few, which may come in useful.