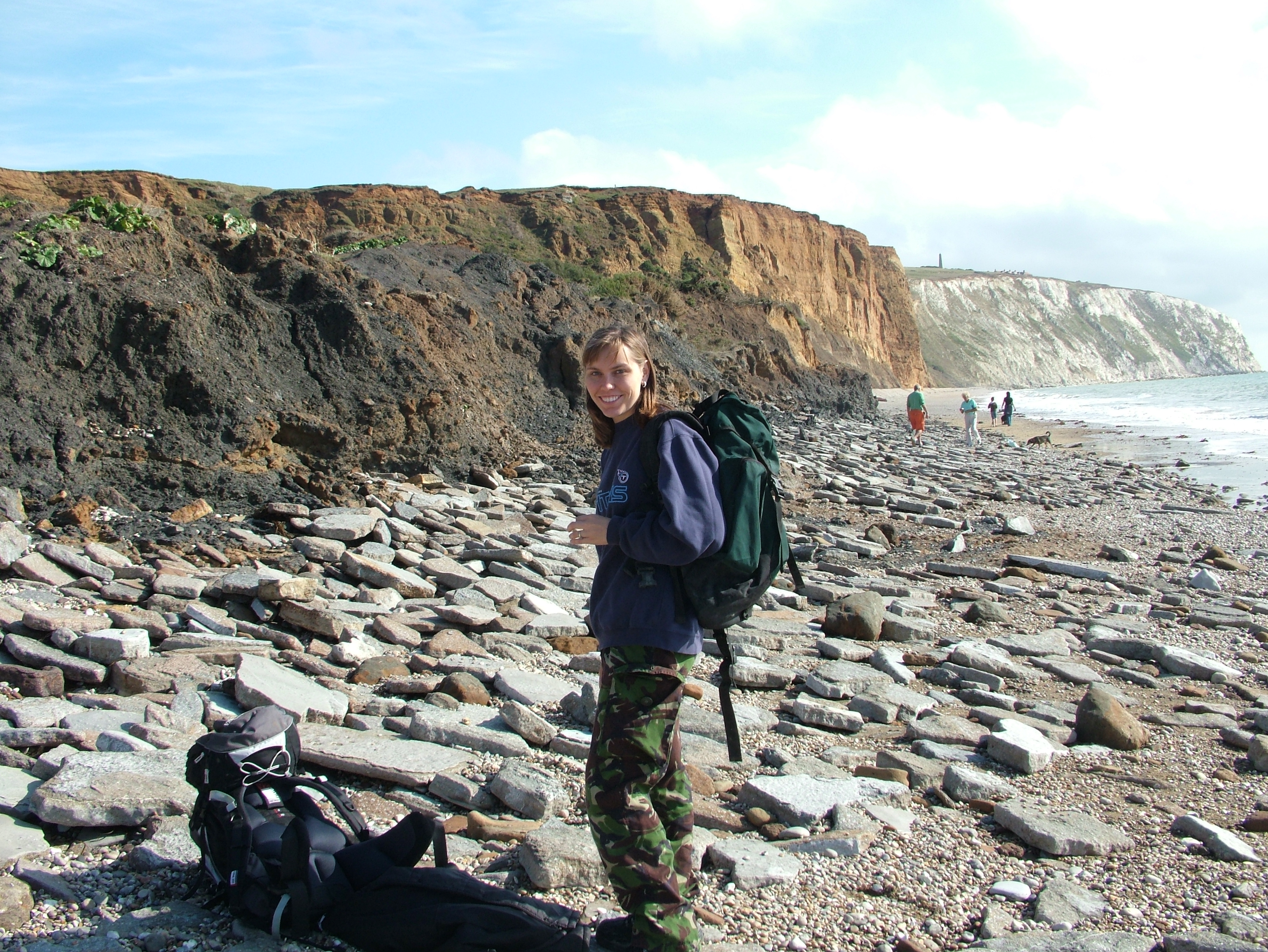 This famous location is well known for dinosaur bones, reptile and fish remains, but you need the right conditions to have any luck, with the best collecting after winter and spring high tides. Yaverland is often sadly over collected..

FIND FREQUENCY: ♦♦♦ – Although lots of fossils can be found, you will often need the right conditions. They can often be found by splitting the bone bearing hard cement beds. Yaverland is also full of plant and fish remains.
CHILDREN: ♦♦♦♦♦ – Yaverland is ideal for families, and suitable for children. The parking nearby has toilets and there is a nice, clear sandy beach that would make an ideal day out.
ACCESS: ♦♦♦♦ – Access to Yaverland is excellent, with parking near to the location.
TYPE: – Most of the fossils are found on the foreshore. You simply pick them up, but they can also be found in the cliff.

From the car park at Yaverland, the Wessex Formation of the Wealden can be clearly seen, marked out by variable coloured beds of sandstones and clays. Vertebrate remains, including the bones and teeth of dinosaurs, crocodiles, turtles and fish, can be found here. There is a lignite bed recognised by a darker layer, in which fossil plant material, consisting of stems, branches and cones, is common. Walking towards Red Cliff, the Vectis Formation from the Wealden Group can be recognised by a fine grey sandstone base with shales and silts above. These limestone bands are full of bivalves (Filosina gregaria and Ostrea distorta).

Following this, the Lower Greensand is well exposed, with beds of the Atherfield Clay Formation, Ferruginous Sands Formation, the Sandrock and the Carstone. Most of these beds are unfossiliferous. However, the first Atherfield Clay section, which is a greyish brown with silts and clays, yields fossils of bivalves (Exogyra lattisma, Sphaera corrugata, Mulletia sp. and Trigonia). Ammonites are rare, but have been found.

At Culver cliff, the Lower Chalk yields the nautilus, Cymatoceras radiatum, and many species of ammonites, bivalves and sponges. Further on, the echinoid, Micraster cortestudinarium, is quite common. Most of the fossils can be found during scouring conditions, or around the piles of hard cement-like material. These beds within the Atherfield Clay Formation are full of bones and teeth (mostly of fish). With a little patience and good tools, you can make some superb finds. Search the cliff face too and dinosaur bones can often be found lying around, washing out especially after high tides and heavy rain. Search the tideline too, because fragments of bone can often be found in the shingle. The chalk also yields a range of fossils. Most of these can be picked up simply lying around on the foreshore, in rocks and boulders.

At Yaverland, the cliff starts with the Wessex Formation of the Wealden Group. Following on from this, the Vectis Formation is exposed and then the Atherfield Clay Formation can be seen. This also contains a hard limestone layer and blocks of this can be found on the beach.

At the far end of the bay, the Ferruginous Sands can be seen in the distance marked by the orange/red coloured cliff, followed by Carstone, Gault Clay and then the Upper Greensand. Finally, the headland is marked by chalk.

Common sense when collecting at all locations should be used and knowledge of tide times is essential.

The tidal conditions for this location are dangerous. Sometimes double tides affect this coast. You MUST return before the tide turns and MUST check out tide times before you visit. It is very easy to become cut off.

You must also take care if walking over the slippages, these can be very sticky and you may get stuck.

Most of the fossils can be picked up off the foreshore, without the need of any tools. However, it is best to take a few, which may come in useful. In particular, a hammer and safety glasses are useful for the blocks of a highly fossiliferous bone bearing bed can be often collected along the base of the cliff.