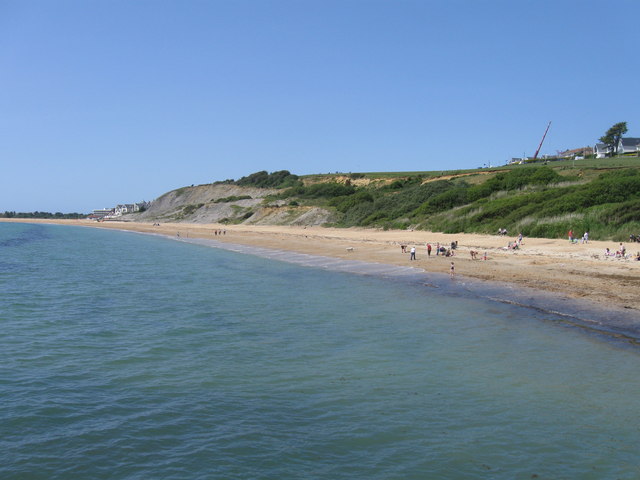 The Oxford Clay and the Corallian Beds are both found at Bowleaze Cove in Weymouth. The high cliff of Oxford Clay (Furzy Cliff) can yield bivalves and ammonites but is now much degraded. In the past, the clay was particularly rich in marine reptile remains and giant fossil oyster shells were plentiful. Today, it is best to examine the location beyond the sandy beach and towards Redcliff Point, especially after scouring tides and rain. Wellington boots or good walking boots will be essential, as the rocky terrain is tough going, especially for young children or those with walking difficulties.

♦ Furzy Cliff can be approached by parking off the A353 (at the end of the sea wall leading out of Weymouth). Park in Bowleaze Coveway and then walking east.
♦ Parking is also available on the roadside near Waterside Holiday Park (DT3 6PP), at the end of Bowleaze Coveway; a good mid-point if also visiting Redcliff Point. Just walk towards the Holiday Park, bear right and descend to the beach via a concrete slipway, past the cafe and toilets.

FIND FREQUENCY: ♦ – Furzy Cliff now yields few fossils, since the sea rarely washes the cliffs out. However, fossils are found after heavy rain. Better to cross the River Jordan and head out towards Redcliff Point (see our other locations).
CHILDREN: ♦♦♦♦ – Bowleaze Cove is suitable for families. There is a car park, toilets, a cafe and a lovely beach. The rocky section to the east, however, is unsuitable for both children and those with walking difficulties.
ACCESS: ♦♦♦♦ – The location at Weymouth is easy to access. Recommended parking at DT3 6PP is near to toilets and a cafe, and is not too far from the town centre.
TYPE: – Most fossils are found on the foreshore, but they can also be found washed out of the clay on the slippages, after rain. Don’t expect to find much here.

This location is part of the Jurassic World Heritage site, so hammering or digging into the cliffs is not permitted. It is an SSSI site.

At Furzy Cliff, it is best to collect fossils after heavy rain, as this often causes slippages. However, the sea rarely washes the cliff itself. Much of Furzy Cliff has been significantly removed in recent years, to enable building development at the site, immediately next to the end of the sea wall. Many of the fossils previously prevalent at this site are no longer found and the chances of finding marine reptile bones are now extremely slim. Gryphaea dilatata and Lopha gregarea oysters, (some of considerable size) can still be found after heavy rain and subsequent erosion.  Search the washed clay on the foreshore or in areas of shingle. At Furzy Cliff, the ammonite, Cardioceras, can also be found.

Over the years, there have been significant changes made to the Upper Oxford Clay of Furzy Cliffs, east of Weymouth’s main sea wall. Erosion here is prevalent and in May 2013, Weymouth Planning Committee was told by council officers that there was a 1:20 chance that further landslips from Furzy Cliff could sweep away parts of the Bowleaze Coveway road by 2063 and furthermore there was a 1:20 chance that cliff falls could undermine some homes by 2113. As a result, Furzy Cliff has now accommodated significant developments, which includes a car park, cafe, small residential and non-residential properties and notably, a coastal defence, which stretches along the Oxford Clay cliff face for some metres. The  coastal defence built here now forms a short promenade, which has considerably reduced Furzy Cliff in both size and accessibility. Furzy Cliff at Bowleaze Cove was once the most fossiliferous part of the Oxford Clay Formation and the best vertebrate site in the UK.

However, it is still a fossiliferous site, especially after significant rainfall, although the shales and clays are much degraded. There can complete Gryphaea dilatata and many fragments, bearing testimony to the slippage of the clay. Also revealed are a number of other bivalves, such as Modiolus biparticus, Pleuromya aiduini and others and the gastropod, Bourguetia saemanni.

The Oxford Clay Formation here is of the Weymouth Member. The lowest beds exposed is a small section of the Jordan Cliff Clay, at the eastern end of the sea wall.  Above these most of the cliff exposes the Bowleaze Clay, comprising soft mudstones and dark silty clays.

In the middle of the Bowleaze Clay, is the Red Nodule Bed, a double band of red-weathered sideritic concretions, that yield beautifully preserved ammonites. Ammonites Cardioceras and a species of Perisphinctes are to be found here, either in the concretions within the clay or as eroded pieces standing proud on the eroded clay or on the foreshore. Fragments are more common than whole specimens, although some are quite sizeable. However, caution is advised when tackling any fossil hunting on Furzey Cliff, as wet, stormy weather can increase the instability of the entire Bowleaze Cove area and slippages can be quite hazardous.

Furzy Cliff is the highest Weymouth Member of the Oxford Clay and totals 41.5 metres in thickness. The lowest beds exposed belong to the Jordan Cliff Clay but the sea wall building has reduced the exposure of these silty clays. Collecting of fossils is still active here and a single visit may prove a disappointment.

The top section of the cliff exposes slipped sections of the basal Nothe Grit Member of the Redcliff Formation, at the base of the Corallian Group.

Common sense when collecting at all locations should always be used and prior knowledge of tide times is essential. Care should especially be taken along the coast from Weymouth to Ringstead of tides, as the sea can cut you off. It is easiest to become cut off at Redcliff Point, because the sea always reaches this point. There are a large number of boulders in difficult positions at Redcliff Point and the rocks are slippery with seaweed, so, care must be taken.. The high cliffs east of Redcliff Point are particularly dangerous, due to regular cliff falls and falling rocks.

A knife and pick are useful, as the sediments at Bowleaze Cove consist of Oxford Clay, which is fairly soft. When the foreshore is exposed, suitable footwear should be worn. A small trowel is also useful, although most fossils can simply be lifted from the clay. Ammonites can be found in the Corallian Beds, which can be extremely hard. Therefore, hammers (ideally a lump hammer), safety goggles and chisels should be taken if walking from Weymouth or east past Redcliff Point to the small Corallian outcrop.