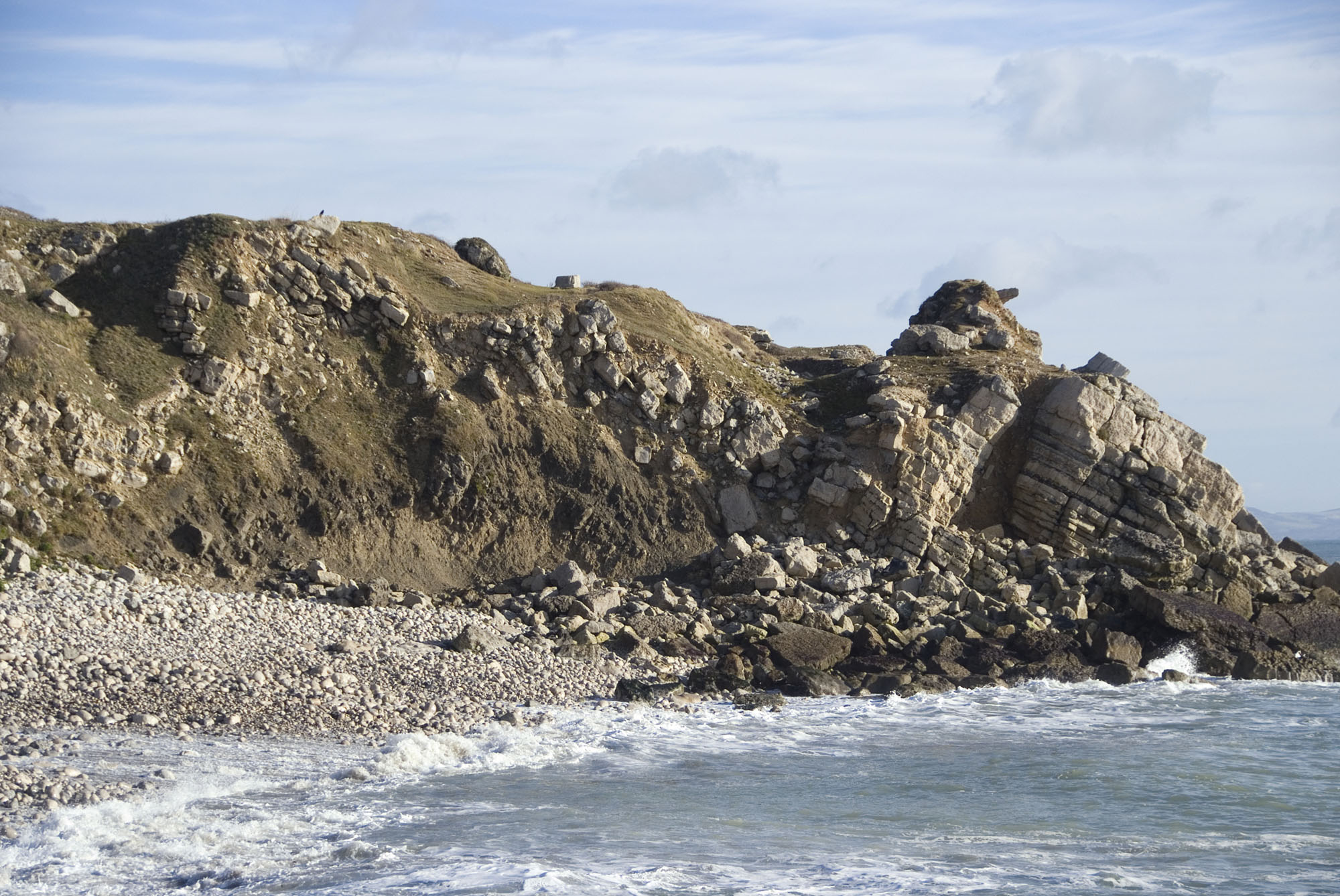 Church Cove is a peaceful location, where you can find bivalves, oysters, trace fossils and ammonites. However, it is difficult to access because the headlands (which need to be passed) are very rocky. Nevertheless, you should be able to find plenty of blocks containing the Basal Shell Bed, which are full of bivalves.

♦ Follow the signs to the Isle of Portland from Weymouth and, once you are on the island, drive through the town of Fortuneswell. Then follow the road to Easton. Take Eastern Road towards the museum and continue down the eastern side of the Island.
♦ There is car park just before Perryfield Quarry, with a footpath on the opposite side of the road taking you to Church Ope Cove.
♦ Parking is free on the Island of Portland (with the exception of the privately owned car park at Portland Bill). Follow the path from the car park to the church and, from here, it continues down some steps on the northern side of the churchyard. This will take you all the way down to the beach, from where you need to head south.
♦ Ref: 50.53731°N, 2.42884°W

FIND FREQUENCY: ♦ – Fossils at Church Ope Cove are not common and those that can be found are poorly preserved. Most of the ammonites have been taken, although fragments can still be seen in the cliff face at the southern end of the bay.
CHILDREN: ♦♦ – Church Ope Cove is not suitable for children, as the rocks are too big for smaller children to climb over. In addition, there is no easy way around the two headlands.
ACCESS: ♦♦ – Accessibility is poor at Church Ope Cove, since you have to climb over some very large rocks.
TYPE: – Fossils are mostly found in the rocks fallen at the base of the cliff and you will have to clamber over these. However, there are plenty of fossils that can be seen in the blocks, but these are best photographed, so that others can see them.

There are no restrictions on collecting on the Isle of Portland, but sensible collecting is important for all locations. However, we recommend leaving the fossils in the rocks for others to view and photograph. You can find the burrows of animals (trace fossils), bivalves and oysters in the Purbeck Beds (Lulworth Formation). Fragments of the large ammonite (Glaucolithites) can be seen in the Portland Beds, but complete ammonites are very rare. The Basal Shell Bed yields bivalves, especially oysters.

At the top of the cliffs at Church Ope Cove are the Purbeck Beds, from the Lulworth Formation. Below these is a complete section through the Portland Stone. Rocks from the Basal Shell Bed can also be seen in blocks fallen from the cliff, which can be full of shells.

Common sense when collecting at all locations should be taken and knowledge of tide times should always be noted. Although the bay itself is quite safe, the two headlands are very rocky, you will have to climb over the rocks which can be quite dangerous, so please take extra care.

Most of the fossils at Church Ope Cove are found in the hard Portland Stone. You will need a good quality hammer and chisel to collect any. Therefore, a crack hammer and safety goggles are recommended at this location.