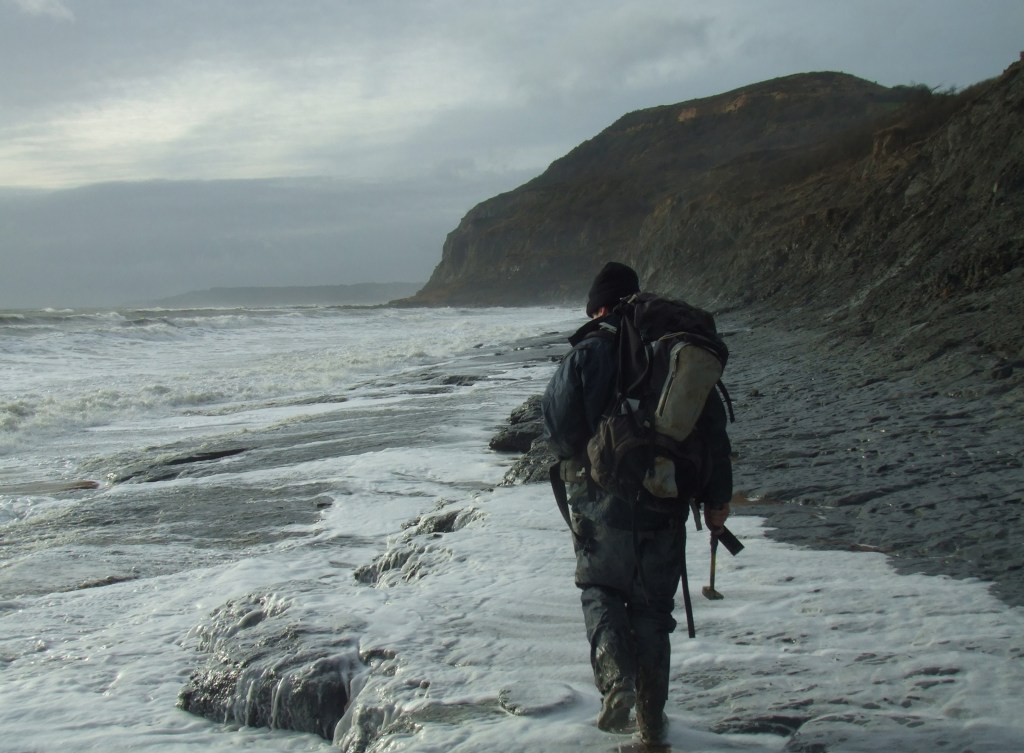 During scouring tides, Seatown turns into an ‘ammonite kingdom’. Along with belemnites, these fossils can be picked up along the foreshore and therefore the location is ideal for children, provided you stay well away from the cliffs, which can be dangerous. There is also a superb pub with views towards Golden Cap, the highest point on England’s south coast. Fossils can be found all year round, as can microfossils and minerals.

♦ Seatown can be reached by following a narrow lane, just opposite the Castle Inn in Childeock. However, this road is not suitable for large vehicles, because of its width. There is a small car park, run by the Anchor Inn, at Seatown, which is highly recommended, as parking elsewhere is very limited.
♦ Golden Cap is on your right (west) from the car park at Seatown.
♦ There is a charge for parking at Seatown.
♦ Ref: 50.72258°N, 2.84052°W

FIND FREQUENCY: ♦♦♦♦♦ – There are a lot of fossils to be found at Seatown, given the right conditions. Most of the larger ammonites that can be found are within nodules but these are actually softer than the surrounding matrix, so you cannot just split them using hammers or wide chisels – you need to use delicate chisels, rock etchers, air preparation tools or knifes to slowly remove the matrix at home. However, ammonite keels and belemnites are plentiful on the beach and foreshore.
CHILDREN: ♦♦♦ – Seatown is suitable for families, but if you are planning to take children, care should be used and they should be kept well away from the base of the cliff. These are extremely high, sheer and crumble all the time. Hard hats should be worn at all times.
ACCESS: ♦♦♦♦♦ – Accessibility to Seatown and the foreshore is excellent. There is a car park practically on the beach, with toilets and a pub next to it. It is also not a very long walk to the fossiliferous beds.
TYPE: – The vast majority of the fossils are found on the foreshore at Seatown. Many are contained within small nodules that can be found among the pebbles. Fossils can also be found during scouring conditions on the foreshore clays. In addition, there is a hard layer at about eye-level at the lower part of the cliff at Golden Cap, where ammonites can be found and, of course, fossils can also be found in the slippages. This is also an excellent location for microfossils. These can be found by taking samples from the clay surrounding pockets of crinoids and belemnites in the Belemnite Stone Beds during scouring conditions

The dramatic cliff of Golden Cap dominates the coastal scenery east of Charmouth and can be seen as the highest point on the south coast of Great Britain at Seatown. The cliffs and foreshore beneath and around Golden Cap is a favourite fossil collecting location, so it can be busy, particularly in the high season. This site is part of the Jurassic World Heritage Coastline, a SSSI and standing on private land. Hammering or digging  in the cliff is strictly forbidden. Damage has already been caused to the site by those who disregard the SSSI rules and any attempt to ignore these rules may result in prosecution. This location is good for fossil collecting during wet and scouring conditions, when fresh falls bring a fresh harvest of fossils. 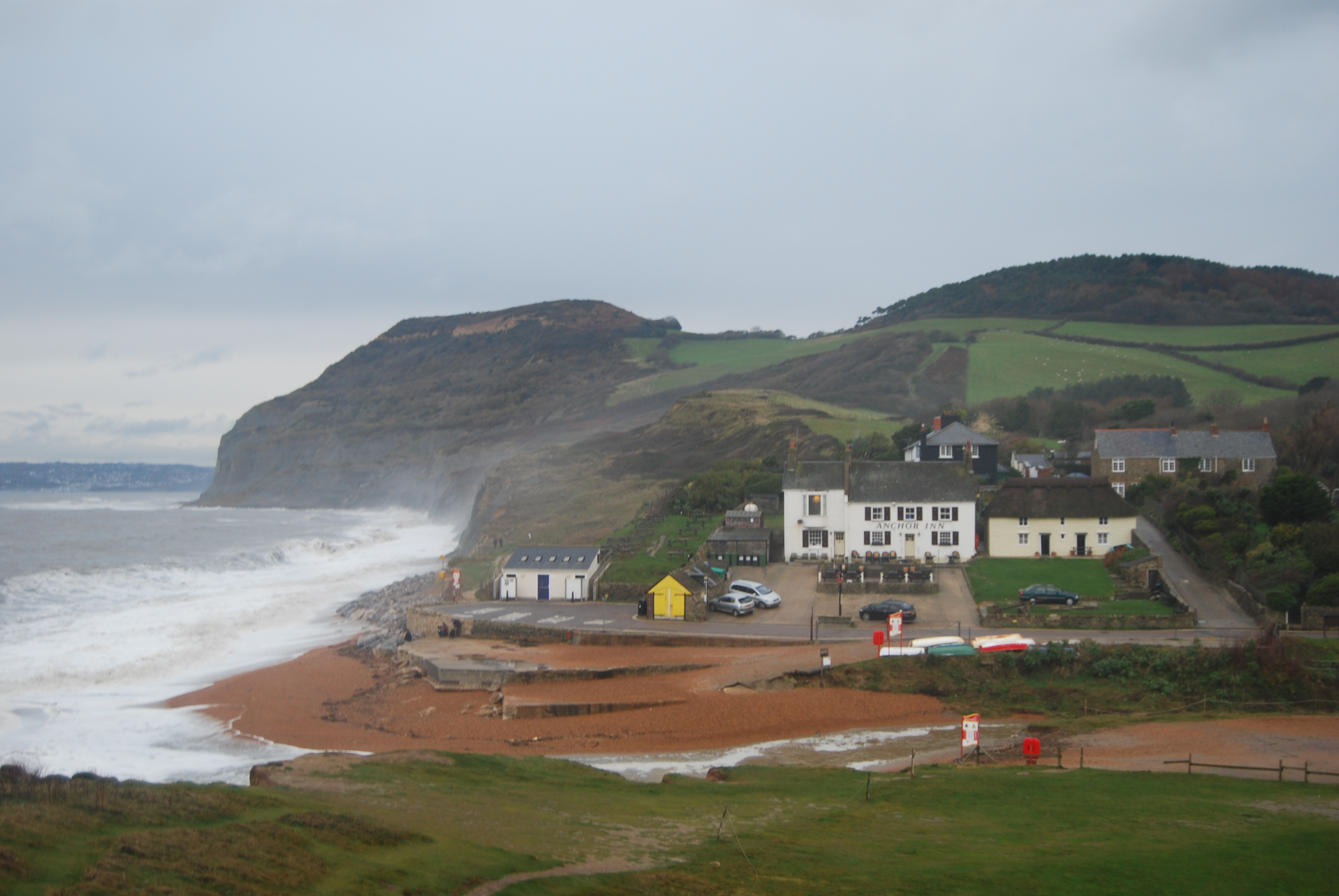 There are many types fossils that can be found at Seatown. The most common are ammonites. These can be found on the foreshore in the shingle, in nodules and within the Belemnite Stone Bed (when exposed). Belemnites are the second most common find, along with crinoids.  Brachiopods, bivalves, fish remains and microfossils can also be found here and reptile remains less frequently.

From the car park, walk towards Golden Cap. The first part of the cliff of soft, precipitous clays is highly unstable and from hereon caution is advised.  Keep clear of the base of these cliffs and be aware of falls, which can be sudden. is not fossiliferous. These beds are the Green Ammonite Member, which contains limestone bands and scattered nodules. The latter may contain ammonites. Often, lumps can be found near the base of the cliff and these can be split open, to be explored for nodules or loose fossils. Ammonites preserved in the mudstone will, invariably, be crushed or missing the centre. This is caused by a lack of sediment in the entire shell during the early stages of fossilisation. 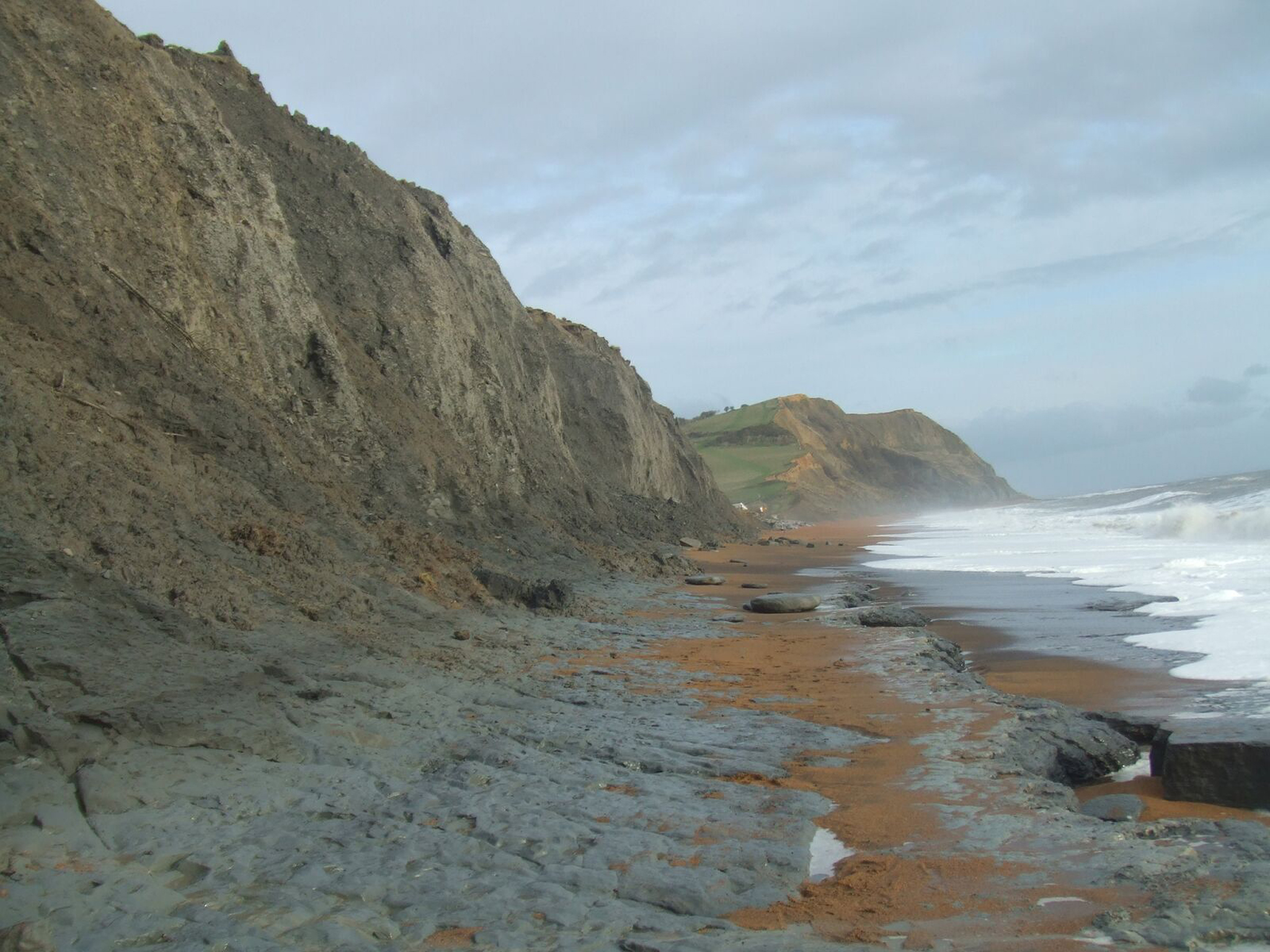 After storms and with the clearance of shingle, the uppermost part of the Belemnite Marl Member is often exposed, with a profusion of belemnites. As you get closer to the middle of the cliff at Golden Cap, very fine shingle mixed with pyrites and clay can be found on the foreshore. Among the pebbles, fossils can be found, but this may involve a ‘hands and knees’ job. However, if you look carefully and you should make some finds. Typically, these will be keels of the ammonite, Androgynoceras, as shown below. 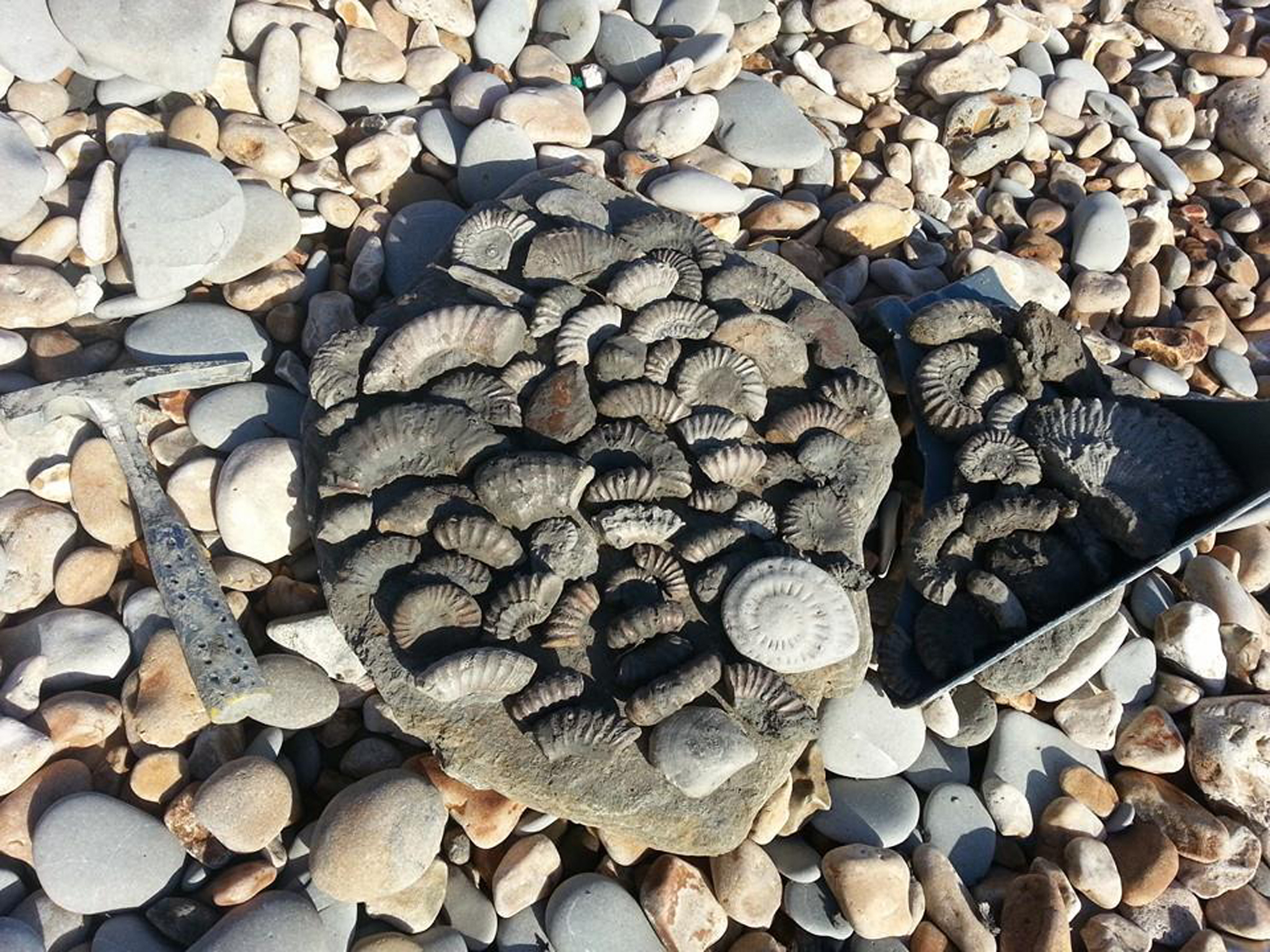 When you finally reach Golden Cap, at the first slippage, you will notice that there is a lot of soft mudstone. The rock is susceptible to rapid erosion and the sea washes this out daily, so fresh fossils are often be found here. Look in the clay, the slippages and the foreshore. Most of the fossils (particularly ammonites) are washed out and can simply be picked up, often requiring no preparation. 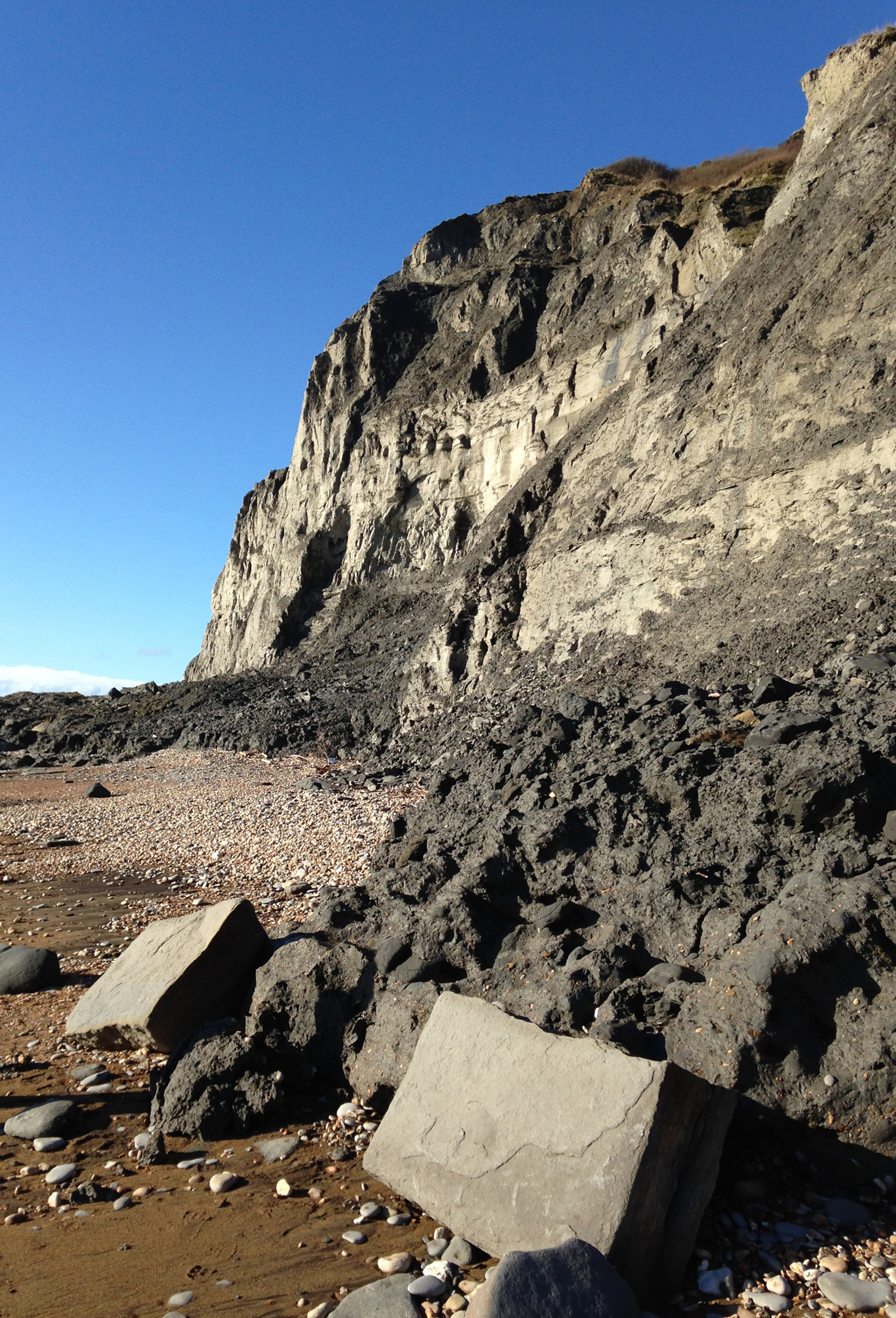 Continuing around the first slippage past the peak of Golden Cap (and staying away from the sheer cliff face, as it often crumbles), you should search the foreshore for nodules that have ammonites or for loose ammonites that have been washed out. You need to look at the nodules that contain parts of ammonites showing, as sometimes all you need is a tiny part of an ammonite to be revealed for it to turn out to be a beautiful specimen after preparation. Further along, a wide range of belemnites can also be found. 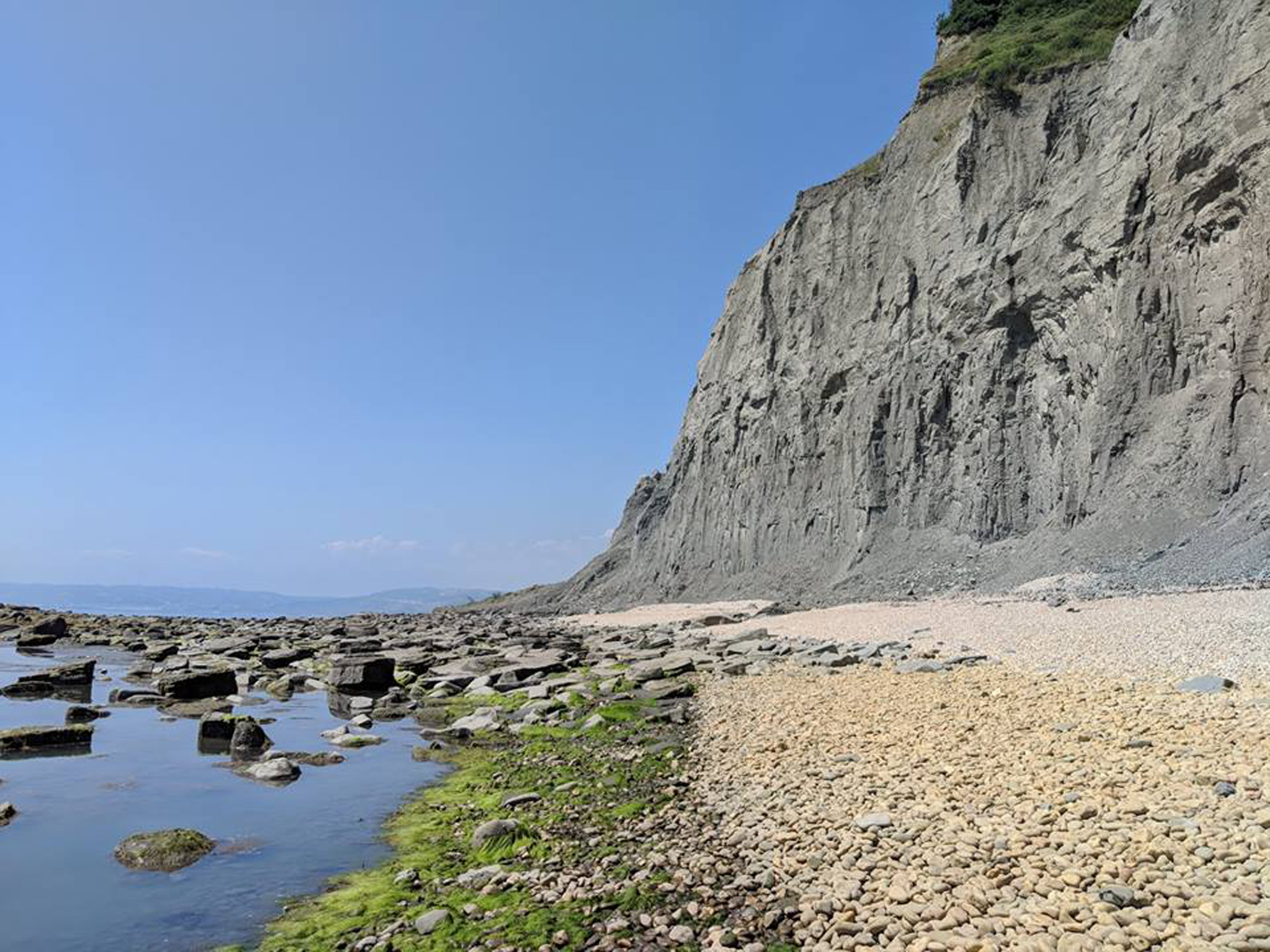 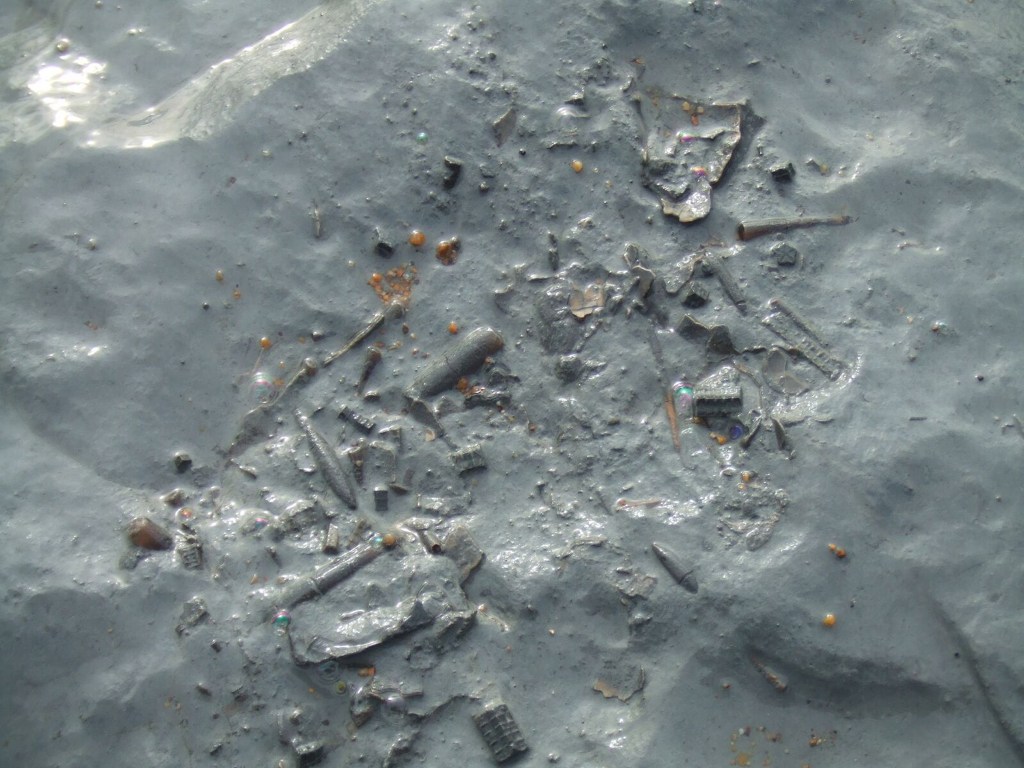 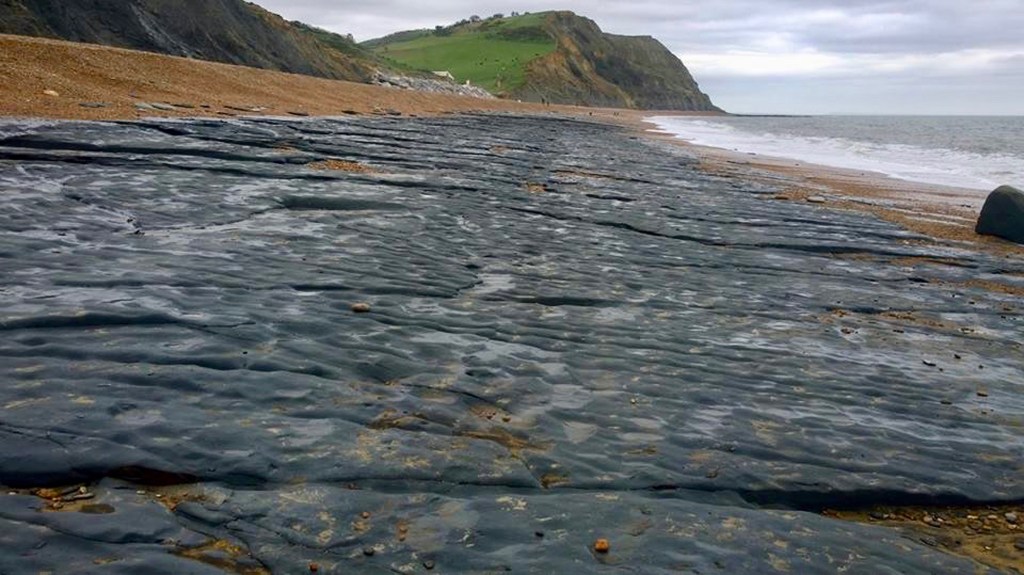 To find a nodule containing an ammonite, look for just a small part of the ammonite protruding. The nodules often look like a ‘Smartie’ sweet in shape.  Such a nodule will require further work at home. You can find them all over the beach, but some contain fossils. However, do not try to split them using a geological hammer or chisel. You will break the fossil, as the fossil is softer than the nodule! These nodules need preparation with an air pen and it might be best to find a fossil preparator who will undertake this work for you. Often, the cost of getting a nodule professionally prepared is worth the result! 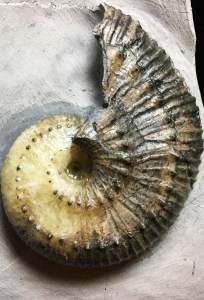 Of course the ammonites, belemnites and other fossils that can be found on the foreshore require no work but these are likely to be highly eroded by the sea or preserved in pyrite, which may decay over time. Ammonites like this are best stored in a dry place in plastic specimen boxes (which are available from UKGE Ltd – see our ‘What to Bring’ page). We also advise adding a sachet of silica gel, which will help to remove the moisture from the air and slow down the process of decay.

Fossil preparation: The best way to prepare fossils from the nodules is by using etchers, fine pointed instruments, air preparation tools or very fine chisels. Work at removing a very small amount of matrix at a time. It takes two to three hours, during which you simply cut around the nodule and eventually the fossil will see the light. Because these ammonites are not pyritic, they are well preserved and will not decay.

At Golden Cap, the Upper Greensand can be seen for miles around. It’s glow in the evening light gives rise to the name ‘Golden Cap’. This formation and the Gault Clay, which lies below , make up the top 60m of the cliff and are Cretaceous in age.

Below this, 22m of Down Cliff Sand marks the start of the Jurassic rock formations. Resting on the base of these sands is the ‘Starfish Bed’, from which fossil starfish can very occasionally be found. These are more common at Thorncombe Beacon, because the beds are much lower and slightly thicker there.

The Eype Clay takes up 45m of the cliff and contains the Eype Nodule Bed. Below this are the Three Tiers and then the Green Ammonite Member makes up the remaining 34m.

During scouring conditions and on the lower parts of the foreshore, the Belemnite Marl Member can also be seen, which yields a wide range of well-preserved belemnites, ammonites and microfossils. However, this bed is normally obscured by beach sand during summer months.

Common sense when collecting at all locations should be used and prior knowledge of tide times is essential. During winter months, this area of coastline can be dangerous, as the sea always reaches the base of the cliff. Sometimes during storms, the sea does not even retreat, so extra care must be taken. And, once you are past the headland at Seatown, you cannot tell how high the sea is back at the beach at Seatown. Therefore, return as the tide turns. In addition, the cliffs at Seatown are extremely high and you should keep well away from the base of the cliff, as rock falls are very common. Hard hats are recommended at all times.

Most of the fossils at Seatown (Golden Cap) are found on the foreshore in small nodules. Breaking open these nodules with hammers will break the fossils, since they are softer than the surrounding rock matrix. Therefore, it is best to take the nodules back home and, using a knife or a very fine chisel, gently remove the matrix, bit by bit. Microfossils can also be found at this location, but you will need a microscope and sieve to see them. Hard hats are recommended as a safety precaution against falling debris from the high cliffs.