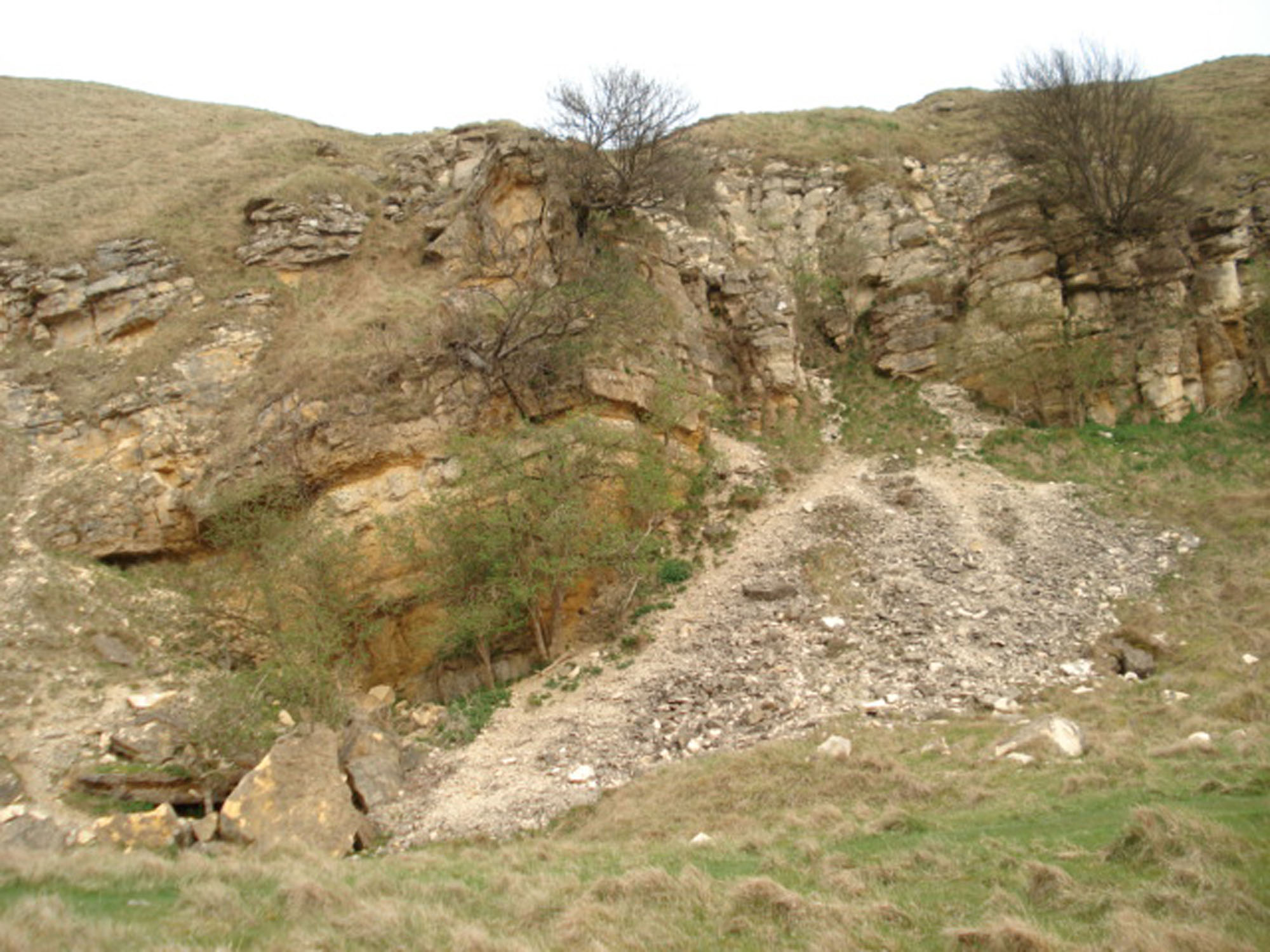 There are many old quarries on the west side of the elevated golf course at Cleeve Hill and on top of the common itself. Fossils are varied and abundant, and plenty can be collected from scree below the faces. However, the in situ rock should not be hammered. Views from the top of Cleeve Common, the highest hill in Gloucestershire, are stunning.

♦ Take Wickfield Lane off of the B4632 at the northwest edge of Cleeve Hill.
♦ There will be a sign to Cleeve Hill golf club and you will pass a private golf club car park on your way to the public car park, which is situated in an old quarry.
♦ Walk out of the car park the way you came in and follow the road/track to the left rather than back down from where you came. Keeping to the western boundary, walk southwest and then south.
♦ After a while, you will see a long series of old quarry faces. The entire stretch is worth investigating.
♦ It is also possible to explore the top of the common from the car park using the guide referred to at the bottom of this page.
♦ Ref: 51.94274°N, 2.01722°W

FIND FREQUENCY: ♦♦♦ – Once you have identified the right rock types, you should be able to find a fair amount. Fossils are extremely abundant in some strata in the exposures, but these should be left where they are. Plenty of specimens can be collected from the scree below the faces.
CHILDREN: ♦♦♦ – There is quite a walk to investigate all of the available hunting areas and the landscape is very hilly. In some places, there are high, unfenced drops. This site is unsuitable for very young fossil hunters, but older children, properly supervised, should be fine.
ACCESS: ♦♦ – There are no toilets or other facilities here. The golf club can be hard to find, so consult a map first. Similarly, the old quarries may elude you if you do not have a good map, compass and preferably an aerial view of the hill. The walk to the fossil hunting areas is not for the unfit and the walk on top of the common takes you along a geological trail. There are eight sites to visit in total and we recommend the guide referred to at the bottom of this page, as it will explain access for each site along the route.
TYPE: – Fossils are mostly found in the scree and weathered rock from the fossiliferous strata in the old quarry faces. Plenty of fossils can be observed in the in situ rock, but these should be left for other people to enjoy.

There are plenty of fossils to be found in and below the numerous exposures here. It is worth spending a few hours at this location and, with patience, you should be rewarded with a good quantity of fossils to take home.

Fossils are scarce or broken in the distinctive white coloured Cleeve Cloud Member (oolitic limestone), but are exposed in various sections both above and below this layer. Below, in the the Crickley Member, and above, in the Aston Limestone Formation (the Trigonia, Gryphite and Clypeus Members), brachiopods, bryozoa, corals, echinoids, crinoid parts, sponges and more can be found in abundance. You can also collect the famous flat echinoid (Clypeus ploti), but these are very rare.

The best collecting is in the scree and weathered earthy parts of the exposures, where nature has done the hard work for you.

The Cleeve Cloud Member corresponds with the Lower Freestone of previous accounts. Within the Farmington area, it rests directly on the Leckhampton Member.

To the west, the Crickley Member (formerly Lower Limestone and Pea Grit) intervenes between the Cleeve Cloud and Leckhampton members.

The Cleeve Cloud Member crops out on steep lower slopes of the valleys of the area. Typically, it is a thinly bedded, very well-sorted, fine to medium grained, compact ooid grainstone, which forms a brash of platy fragments. Coarser-grained beds also occur, and in some cases these contain a certain amount of shell debris.

White, grey and black clay above limestones of the Harford Member are now totally obscured.

The Aston Limestone Formation is exactly equivalent to the Middle Inferior Oolite of previous accounts. It is divisible into three members,

NOTGROVE MEMBER. Formerly the Notgrove Freestone, this rock is a grey, well-sorted, medium-grained ooid grainstone. The upper surface, beneath the Salperton Formaton, is commonly encrusted by oysters and intensely bored by annelid worms.

The Upper Trigonia Grit Member forms the basal unit of the Salperton Limestone Formation (Upper Inferior Oolite) over much of the Cotswolds region. Typically, it is a hard, grey to brown, very shelly, shell fragment and ooidgrainstone to packstone.

The beds are commonly fossiliferous, with common echinoids (Clypeus ploti especially near the top), brachiopods (notably Stiphrothyris spp. and Sphaeroidothyris), and moulds of myid bivalves.

In some places there are high, unfenced drops. This site is unsuitable for very young fossil hunters, but older children, properly supervised, should be fine. Ensure that you keep well away from the cliff faces, where rocks can frequently fall. A hard hat is recommended.

Sturdy footwear, some packing material, a bag and some food and drink should suffice at this location. However, a small trowel might also come in handy for sifting through the earth and scree below the faces. A hard hat is recommended if looking near the cliff faces.