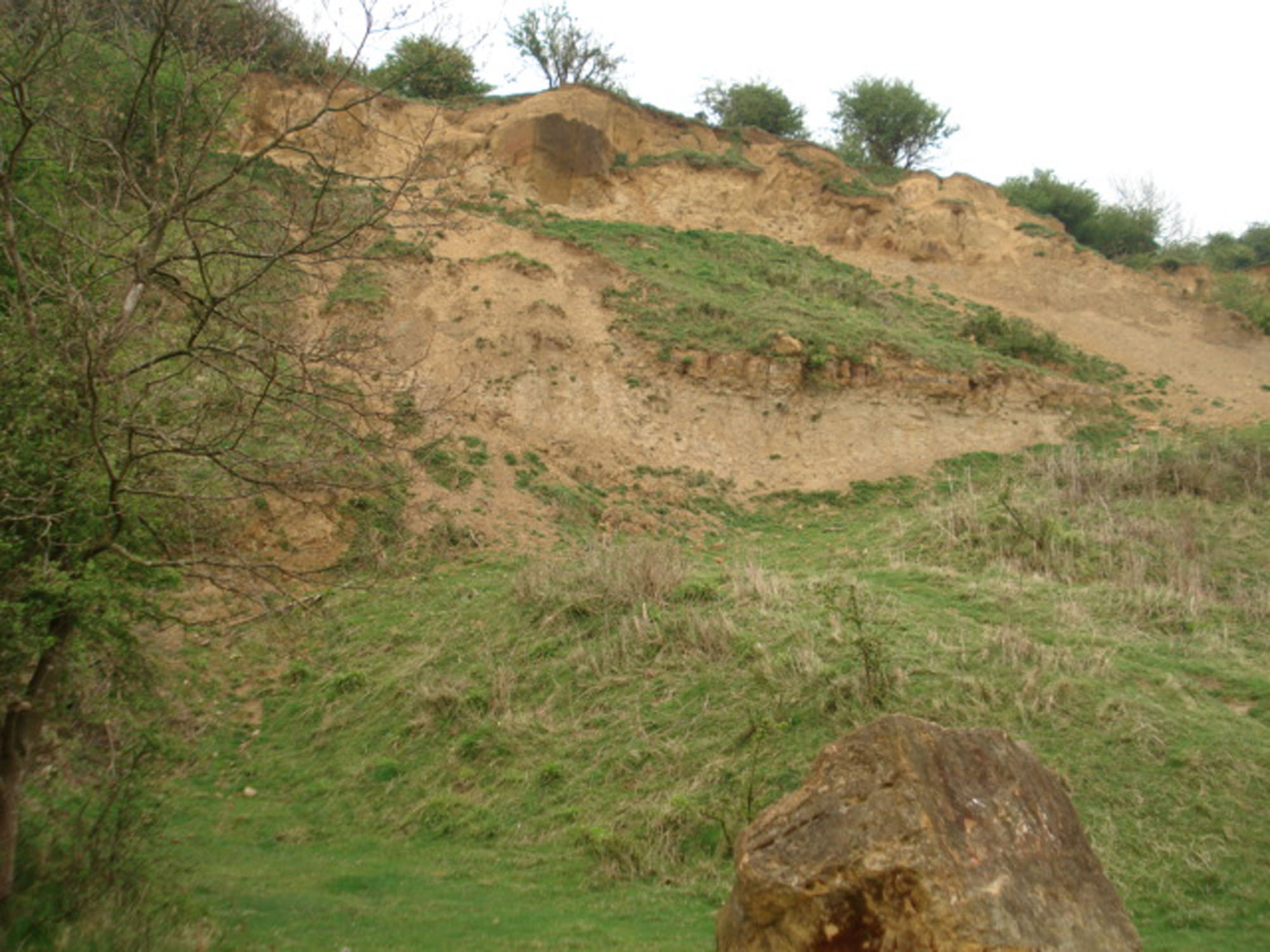 The two large quarry faces at Robinswood hill are sites of special scientific interest (SSSI), as they expose the best inland section of early Jurassic rocks in the country. As such, fossil hunting is limited. However, some fossils may be collected from loose material and the views from the top of the hill are worth the walk.

♦ Take Fox Elms Road from the A4173, just north of a couple of schools and the hamlet of Whaddon. Make your way to the car park at the end of the road and park there. The car park is poorly signposted, so it is useful to have a map with you to find the location.
♦ Walk out of the car park the way you came in and follow the road back down the hill. When the road turns left, you will see numerous paths branching off to the right. To get to the lowest quarry face, you need to take the path with the metal gate. Follow this in a north-easterly direction and you will soon come to another gate in front of the quarry face.
♦ Ref: 51.83092°N, 2.24022°W

FIND FREQUENCY: ♦♦ – It is not hard to find fossils here, but their quality is usually fairly low. As the site is a SSSI, larger blocks should not be broken down and no collecting is allowed from the quarry faces.
CHILDREN: ♦♦♦♦ – There is easy access to the lowest and most productive quarry. To reach less fossiliferous exposures higher up, a steep walk is required. Children should be kept away from the main quarry face.
ACCESS: ♦♦♦ – There are no toilets or other facilities here. The car park can be hard to find, so consult a map first. The walk to the lowest quarry is easy, but to get to the others (including the other quarry) a climb is required. This walk takes you along a geological trail and there are six sites to visit in total. We recommend the guide referred to at the bottom of this page, as it will explain access for each site.
TYPE: – Fossils are mostly found in the scree and weathered rock to the right of the lower quarry face. Directly above, at the higher quarry face, a few partial belemnites can be found in the rocks below the face. Elsewhere on the hill, there are other exposures, but fossils are infrequent.

Fossils are mainly found in rocks left by the quarrymen in the woods to the right of the lowest quarry face. However, these rocks and their fossils have suffered weathering over time and good quality specimens are limited.

You will find plenty of fossiliferous rocks among the trees to the right of the quarry face. Common fossils include belemnites, bivalves and brachiopods. However, in the main, these are of a fairly low quality. If you are lucky, you may come across a large rock, which has been freshly broken due to weathering and this may expose some better fossils.

You can access the quarry face above the lowest quarry by retracing your steps to the road and taking the path that goes off to a sharp right. Follow this path up the hill. The path will thin out and almost disappear near the top, but will lead you to the entrance to the higher face. Here, pieces of belemnite can be found in the fallen rock.

The views from the top of the hill are worth the climb. If you exit the higher quarry the way you came in, you can follow geological trail posts to the top of the hill. On the way, you will see a couple of other exposures, but fossils are very hard to find in these.

The Jurassic rocks of Robinswood Hill are Toarcian and Pliensbachian in age. There are six sites to visit along this trail, covering various formations.

The first site of the trail has rocks from the Middle Lias (the Dyrham Formation). This is mostly ferruginous beds, with alternative bands of shale. These beds are Pliensbachian in age.

As you progress along the route, the rocks become younger, with the Marlstone Rock Formation (Pliensbachian – Toarcian age) consisting of iron oolite, at the middle part of the trail.

At the final sites along the trail, rocks consist of the Whitby Mudstone Formation and Bridport Sand Formation (also Toarcian age).

What makes this area so fascinating is that the same rocks can be found here as at some of the other major geologically important sites of the UK (and indeed top collecting areas), including Charmouth, Bridport and Whitby.

In some places, there are high, unfenced drops. This site is unsuitable for very young fossil hunters, but older children, properly supervised, should be fine. Ensure that you keep well away from the cliff face, where rocks can frequently fall and we recommend you wear a hard hat. And be aware that it is easy to slip on the scree slopes, so care must be taken.

Sturdy footwear, some packing material, a bag and some food and drink should suffice at this location.