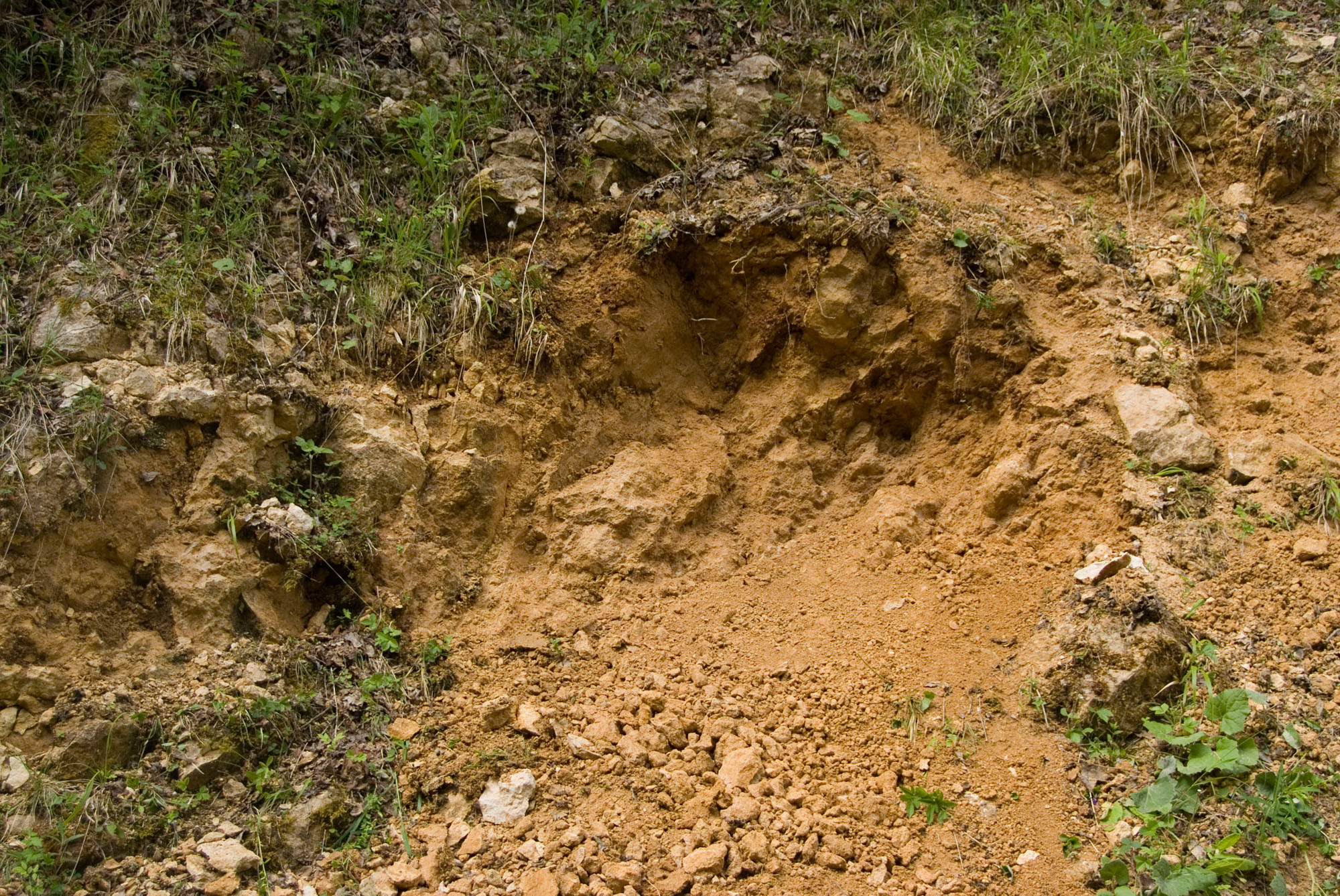 T his is a disused railway cutting, hidden away in a thick forest. The small cutting has good exposures of Inferior Oolite and this location is well documented for its Clypeus sinuatus flat echinoids, but many brachiopods and bivalves can also be found.

♦ Gilbert’s Grave is a small cutting in the Chedworth Woods. From the A40, take the minor road to Compton Abdale and continue south until you reach the crossroads. Here, continue up the road straight ahead, until you cross over an old railway bridge.
♦  There is a small lay-by here to park in and the footpath is on the same side as the lay-by. This is marked on OS 1:25,000 scale maps as Tunway Gate or, on other maps, where the road crosses the disused railway to the northwest of Chedworth Woods.
♦  Follow the footpath through the woods. This will pass a clearing and then over an old railway embankment. This is very obvious, as it is steep down either sides of the embankment. Continue along the path and you will reach the cutting.
♦ Ref: 51.82764°N, 1.93243°W

FIND FREQUENCY: ♦♦♦♦ – This site is extremely rich in the Clypeus echinoids, as well as brachiopods. There are two very good exposures that have been cleared in recent years, giving an opportunity to make plenty of finds from the fallen blocks and scree slopes.
CHILDREN: ♦♦♦♦ – The walk is suitable for children, but they must be kept away from the very steep sides of the railway embankment on walk to the cutting.
ACCESS: ♦♦♦♦ – The site has good access with a fairly short walk. However, there is limited parking for just one or two cars and the Tunway Gate is not marked on any maps other than the OS 1:25,000 scale ones. The footpath is also not marked. To the northwest of Chedworth Woods, you will see where the road crosses the old disused railway and it is here that the trackway starts.
TYPE: – Fossils are found in the banks of this disused railway cutting. The sides of the cutting are cut into Inferior Oolite and are particularly rich in echinoids.

This disused railway cutting is cut through the Inferior Oolite and, of particular interest, is the Clypeus Grit bed, which is a layer of softer material in which large flat echinoids can be found. In recent years, the exposures have been cleared. These new faces give an excellent opportunity to collect plenty of fossils. There are also plenty of blocks to look at in the scree slopes.

The most productive beds are those from the upper cutting, where the oolite is much softer. Most of the echinoids will be damaged, although the internal mould still shows great detail. If you are luckily enough, you will find one with the shell intact, but these are much less common.

Brachiopods can also be found in the lower beds and these are often in superb condition. They can easily be found and also collected from the scree slopes.

The Inferior Oolite at Gilberts Grave is found along the banks of the old disused railway line. It is just one bed, the Clypeus Grit bed, is full of the eponymous Clypeus echinoids. This is part of the Salperton Limestone Formation.

The Salperton Limestone Formation is a pale grey to brown rubbly, fine- to coarse-grained ooidal, peloidal and fine shell-detrital packstone to grainstone (Clypeus Grit Member). Generally, it has very shelly a

This site is generally quite safe, although common sense when collecting at all locations should be used. When walking down the old railway route and over the embankment, there are very steep and high sides. Keep well away from the edges at all times and, if bringing children, always walk with them until you reach the safer railway cutting.

A pick is handy to clear the cutting sides and a knife to remove debris around fossils. A hammer and eye protection can also be taken to split any lumps of oolite up into smaller fragments. Wrap up fossils well and place in small bags or containers. The echinoid, Clypeus, can be particularly fragile.

Although there are no restrictions at this location, to preserve this site for future generations, hammering the bedrock is not permitted, you can hammer and collect from the loose rocks and scree.