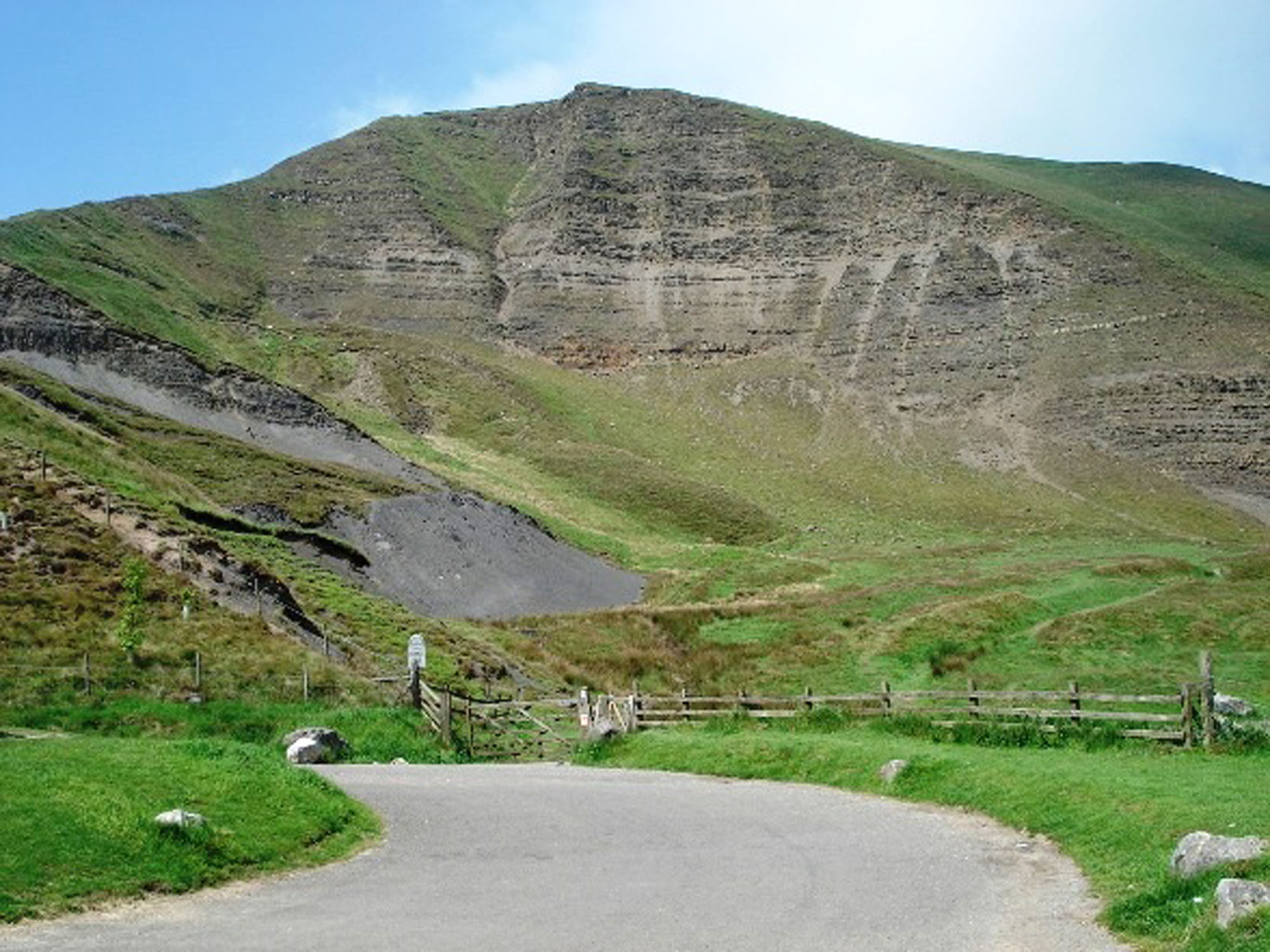 Castleton has long been known for its Carboniferous Limestone, its caves and for the Blue John semi-precious stone mined here. Much of the area is owned by the National trust and is designated an site of special scientific interest (SSSI). This means that fossils can only be looked at and photographed, but must not be collected.

♦ The following is a suggested walk to take in some of the spectacular scenery and geology of this classic location. There is plenty of free parking along the road at the base of Treak Cliff. On a quiet day, it is possible to park immediately below Treak Cliff Cavern.
♦ Near to the bus stop at the base of Treak Cliff, there is an information board. Once you have read this, take the path that leads up to the cavern. At the beginning of this path, at the base of the steps, there is a large limestone slab with many crinoid fossils weathered proud of the surface.
♦ Ascend the steps, taking note of the information boards describing the geology of the area. Once you reach Treak Cliff Cavern, it is definitely worth paying the cave system a visit. The gift shop also sells fossils and an inexpensive leaflet about the local geology.
♦ From Treak Cliff Cavern, return to the path and continue towards Mam Tor. Along the way, you will see a few outcrops of rock and some loose blocks of limestone. Fossils can be seen weathering from the surface of these. In a few places, small crystalline, purple rocks may be found in the path. These are Blue John.
♦ Once you round a corner and come to a gate, look to your right and you will see Mam Tor. Landslips have obliterated one side of the hill and the rock layers that are composed are clearly visible. Continue walking to Blue John Cavern. This is another excellent attraction and is well worth a visit.
♦ From Blue John Cavern, head towards Mam Tor. At the base of the hill, shales and sandstones can be found, but these are poorly fossiliferous. However, the view of the hill and its layers revealed by landslips is amazing.
♦ Below Mam Tor, the old road has been destroyed by the earth movements referred to above. You can walk along this old road, which soon leads to its still-used undamaged part. The walk concludes by following this road back to the parking area below Treak Cliff Cavern.
♦ Ref: SK 12732 83752

FIND FREQUENCY: ♦♦♦ – Rock outcrops contain limestone reef fossils, such as parts of crinoid stems, brachiopods and corals. There are also loose rocks, some of which contain fossils. Small pieces of Blue John stone are sometimes found.
CHILDREN: ♦♦♦ – This is a fair walk, with some steep areas. The two caves encountered provide excellent stop-off points and are guaranteed to impress.
ACCESS: ♦♦♦ – The route follows a public footpath. In some places, there are steep steps and rises in the path, but these should be easily tackled by anyone of moderate fitness. The rock outcrops are found a little distance from the path, in some cases with a fairly steep gradient in between.
TYPE: – Fossiliferous rocks are found loose and also as outcrops above the path. Blue John can sometimes be found in small pieces within the path itself and loose in areas where soil is exposed.

Within the limestone outcrops are found parts of crinoid stem, brachiopods and corals. Trilobite pieces are rarely found. Small pieces of Blue John are also present within the soil and are revealed in areas where vegetation has been removed.

Below Mam Tor, the shales yield occasional plant fragments, but these are poorly preserved. Treak Cliff is largely covered in grass, with limestone outcrops occurring in only a few places. These are sometimes hard to reach, due to the gradient of the hill, but there are one or two outcrops along the path. Look at the surface of the limestone for fossils. Loose blocks can also be investigated where encountered.

If you keep your eyes on the floor as you walk along the Treak Cliff part of the path, you may find a few pieces of Blue John. These can be purple, off-yellow or clear in colour.

Derbyshire is divided into two general geological regions. To the south, the ‘White Peak’ comprises mostly Carboniferous Limestone and to the north, the ‘Dark Peak’ is mainly shales and coarse sandstones known as gritstone.

Castleton is an important area geologically for the Peak District as it has such a variety of rocks and is on the border which is an unconformity, between the Carboniferous Limestone Series of Dinantian-aged (Lower Carboniferous) limestones and the Namurian-aged Millstone Grit Group from the Silesian (Upper Carboniferous).

During Carboniferous times (330mya), the region was a shallow, tropical, marine environment roughly on or near the equator. It had some reefs and some deeper waters, and the occasional volcano or volcanic vents spewed lava onto the seafloor depositing thin bands of basalt. This environment lasted for a period of about 40myrs and formed limestone beds some 3km thick.

The Castleton area was then subject to uplifting that raised the limestones above sea level and subjected them to erosion. Not only did surface eroding take place, a complex series of small caverns, known as pipes, were created by the natural process of karst cavern formation. The region was then re-submerged beneath the sea and was buried by shales and sandstones. These shales and sandstones formed a cap on the limestones trapping fluids within them.

Then, about 270 Mya, as a result of major movement within the earth’s crust, the whole area started to be pushed back up again, forming what we know today as the Pennine Anticline. This uplifting caused the rocks to crack and opened gaps along a roughly east-west direction that were ready to be filled with minerals. Low temperature (130 to 200°C) hydrothermal fluids trapped deep underground flowed in to the joints, cracks and pipes in the limestone, depositing fluorite, calcite, baryte and galena. Surface erosion and the formation of a second, large natural cavern system at the end of the last ice age were the last events to affect the present landscape.

This is generally a safe location. However, some parts of the path are fairly steep and, in wet conditions, are liable to become muddy. In some places, mobile phone signals may be lost.

Most of the fossils at Castleton are found in the loose scree and rocks. No hammering or collecting is permitted, so we recommend that you take a camera to photograph the wonderful fossils and minerals. Good walking boots or wellies are recommended, as the paths can become muddy.

This site is an SSSI. This means you can visit the site, but hammering the bedrock is not permitted. For full information about the reasons for the status of the site and restrictions please download the PDF from Natural England – SSSI Information – Castleton