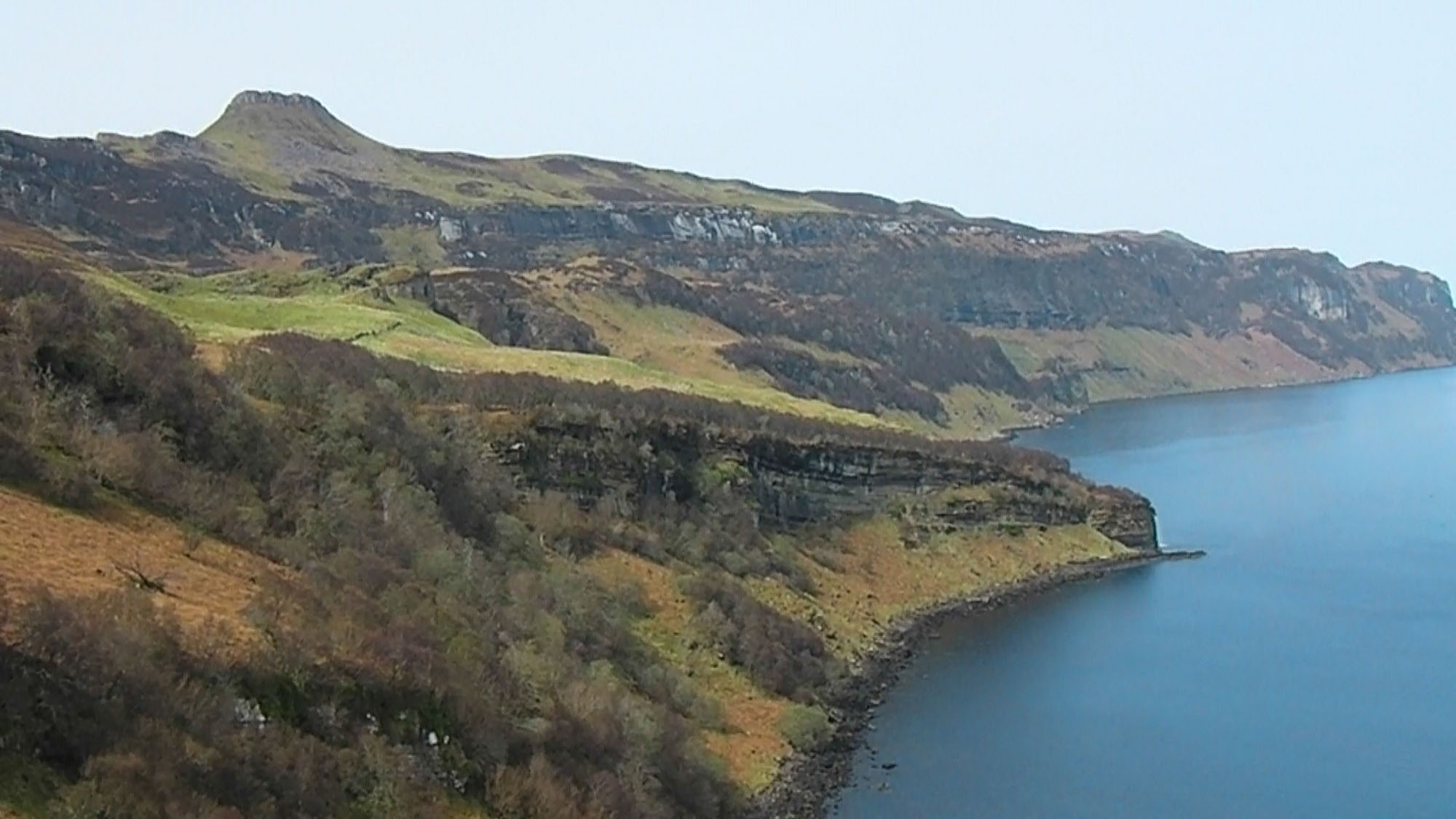 Hallaig is at the southern end of the Isle of Raasay. Fossils can be found along the east shore, and in burns and streams at various places on the island. Raasay boasts geology of international importance, and Hallaig is an excellent location to see it.

♦ Drive either south from Portree or north from Broadford on the A87.
♦ Take the ferry to Raasay from Sconser Pier and, from new ferry terminal, drive south towards Inverarish.
♦ Take the turning for Fearns and carry on past the ruined buildings of the iron-ore mine.
♦ Carry on driving until you reach the end of public road at Fearns and park in front of holiday cottages. Fossils can be found along the shore, and in burns and streams at the end of the road
♦ Ref: 57.36251°N, 5.99542°W

FIND FREQUENCY: ♦♦♦ – Fossils are found along most of the shoreline and are easily visible on most loose rocks.
CHILDREN: ♦♦ – This is a long hard walk and is not suitable for the very young or unfit. In addition, there are no toilets here. There is a cafe/restaurant at Raasay Hotel and a small store in Inverarish.
ACCESS: ♦♦♦ – Parking is free and plentiful at the holiday cottages. An old road/track leads most of the way to Hallaig. However it is 3.2km to there and then a large descent to the shoreline, followed by the same ascent to the path again at the end of the day. There are steep cliff sections below, but there are fairly easy and accessible gullies to be found
TYPE: – Foreshore boulders are the best chance of finding good fossils.

Raasay is a geological gem and no amount of time at any fossil location can do them justice. Fossils can be found in strange places, like in small burns and waterfalls, as well as from the shoreline to up in the highest cliffs. All of these locations involve great distances, and this place demands a high level of fitness.

Hallaig is one of the most accessible locations, because an old track takes you most of the way there, but even then, you will need the whole day to see it all. Fossils can range from ammonites and belemnites, to a huge variety of large Pleinsbachian bivalves. This is a pretty undiscovered island for fossil hunters and anything is possible here. The problem may be carrying it back.

A shorter alternative location is found by dropping down onto the foreshore at the bay, just before the waterfall at Rubha na Leac. There are fossils to be found along this bay, but you cannot continue past the waterfall, as it falls directly into the sea, even at low tide.

The rocks here are Jurassic in age and are 185myrs old. Raasay has a wealth of Jurassic cliff faces covering several zones, but most are very hard to reach, and erosion here has been a slow affair.

After that, there is the Upper Lias, consisting of 25 m of thick calcareous shale, including 2.5m of Raasay Ironstone Formation (Toarcian- Bajocian age).

Then there is the Bearreraig Sandstone Formation (Toarcian- Bajocian age), made up of 210m of thick black shale, calcareous sandstones and clay.

Finally, there are rocks of the Great Estuarine Series, consisting of oil shale followed by sandstones, laminated shales and limestones.

Common sense when collecting at all locations should be used and prior knowledge of tide times is essential.

A big hammer can be handy here, but it is a huge distance to carry too much weight and this is very remote location. In fact, cold chisels should suffice. The mobile phone signal is somewhat hit and a miss, depending on height. Take drinks and snacks, which are a must for the energy required to get here and back.