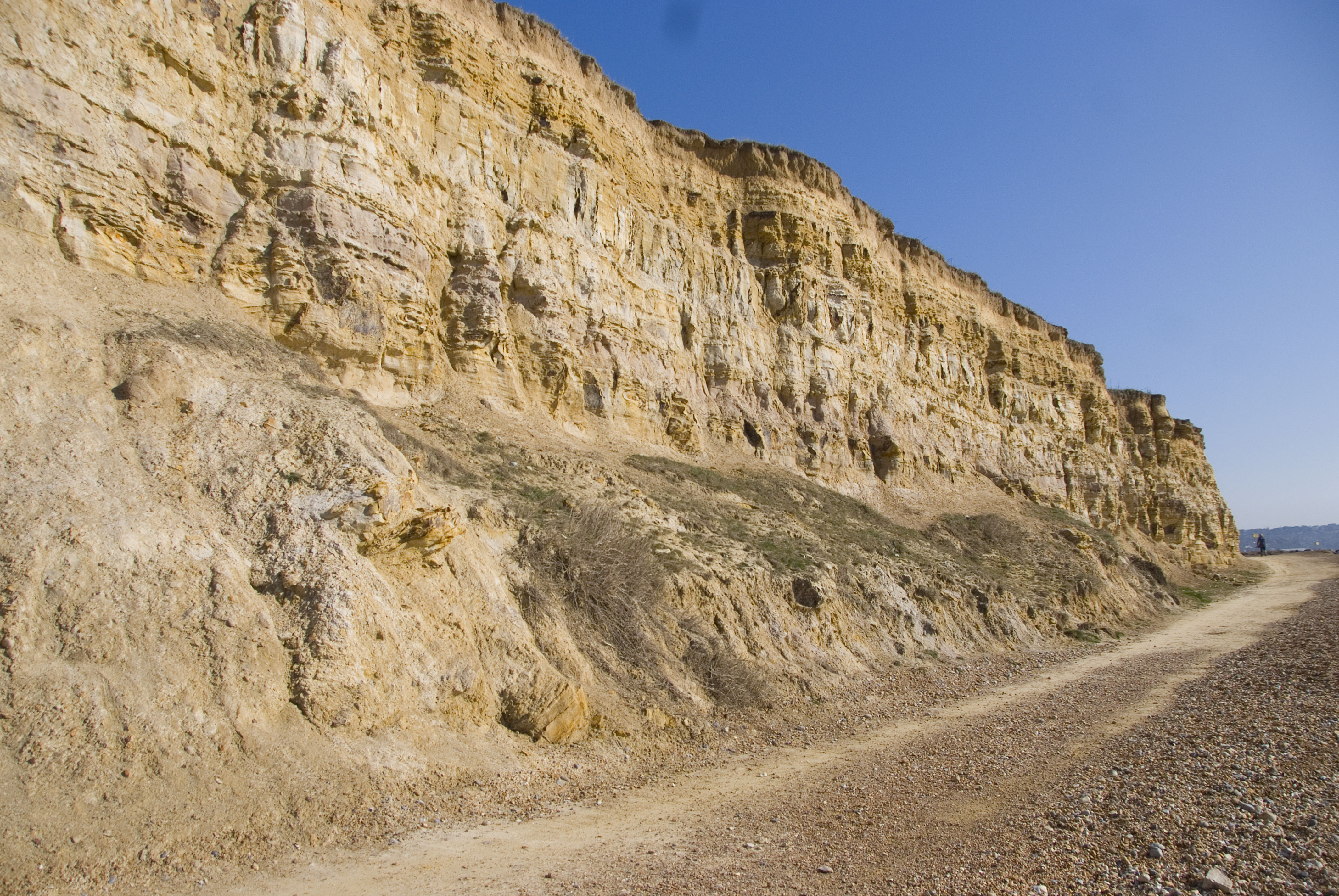 Bexhill was made famous after the storms of November 2000 exposed dinosaur trackways on the foreshore. Since then, collectors have been finding a wide range of fossils, including fish, crocodile, turtle and dinosaur remains.

♦ You need to head to the eastern end of Bexhill, marked on maps as Galley Hill. Stay on the A259 until you come to the roundabout by the industrial park with a large Tesco’s immediately after.
♦ There is car park where there is a bend in the road, which is next to a railway embankment.
♦ DO NOT park here, as you will be clamped. Parking in this car park is strictly for using the car park, toilets or cafe only.
♦ The nearby retail car park is also restricted. Instead, park on the road just past the car park on the seaward side of the road.
♦ To access the beach from here, walk back to the toilets where you will find a walkway under the railway. Once on the beach, walk west.
♦ Ref: TQ 76480 07889- 50.84360°N, 0.50536°E

FIND FREQUENCY: ♦♦ – Fossils at Bexhill are usually only found during scouring conditions. If conditions are unfavourable, then it is likely you will return with nothing. In addition, the foreshore deposits can sometimes be green with algae.
CHILDREN: ♦♦♦ – This location is suitable for families, but please keep away from the base of the cliff at all times.
ACCESS:♦♦♦♦ – Bexhill is easy to find and the fossil location is not too far to walk to. You can park at the car park where there are also toilets.
TYPE: – Fossils at Bexhill are mostly found simply lying on the foreshore during scouring conditions. The cliffs are not generally fossiliferous.

Dinosaur footprints can be seen during scouring conditions at Bexhill. During November 2000, when stormy weather shifted large quantities of beach material and exposed a siltstone bedding plane, footprints (including a sequence of tracks from Iguanodon) could be seen. The sand has never been fully replenished since the storm, so the Wadhurst Clay is always exposed on the foreshore. Two species of crocodile can be found at Bexhill – the more common Goniopholuis, but also the rarer and smaller crocodile, Bernissartia. Turtle and fish remains can also be found here, as can dinosaur remains. Search the exposed clay on the foreshore. The best beds are the lowest, which are visible during extremely low tides. This is why it is a good idea to collect here during spring tides.

The rocks at Bexhill are Lower Cretaceous in age and are part of the Wealden Group. The bulk of the cliffs at Bexhill consist of the Early Tunbridge Wells sands. This is not fossiliferous. Below this, and exposed on the foreshore, is the Wadhurst Clay. This also forms the lowest part of the small cliffs, but is now covered due to the sea defences. Therefore, fossils can only be found on the foreshore.

The sediments exposed in the cliffs and on the foreshore between Hastings and Fairlight in the east date from the Early Cretaceous epoch (Berriasian – Valanginian stages) approximately 143-139 mya.

The foreshore area from Bexhill to Fairlight is well known for the track casts and prints of dinosaurs, including iguanodonts and various theropods, polacanthus and pterosaurs, as well as pieces of dinosaur bone.

Common sense when collecting at all locations should be used and you must check tide times before going. It is not that easy to get cut off here and, since fossils can only be found during low tides, there is no reason to visit on a rising tide. However, it is still possible to get cut off during extremely high tides.

Most fossils are found in the soft clay exposed on the foreshore. Therefore, a trowel, knife or pick comes in very handy.

Restrictions: None – There are no restrictions to Bexhill. However, it is important you follow our national fossil code of conduct.
It is important to follow our ‘Code of Conduct’ when collecting fossils or visiting any site. Please also read our ‘Terms and Conditions‘