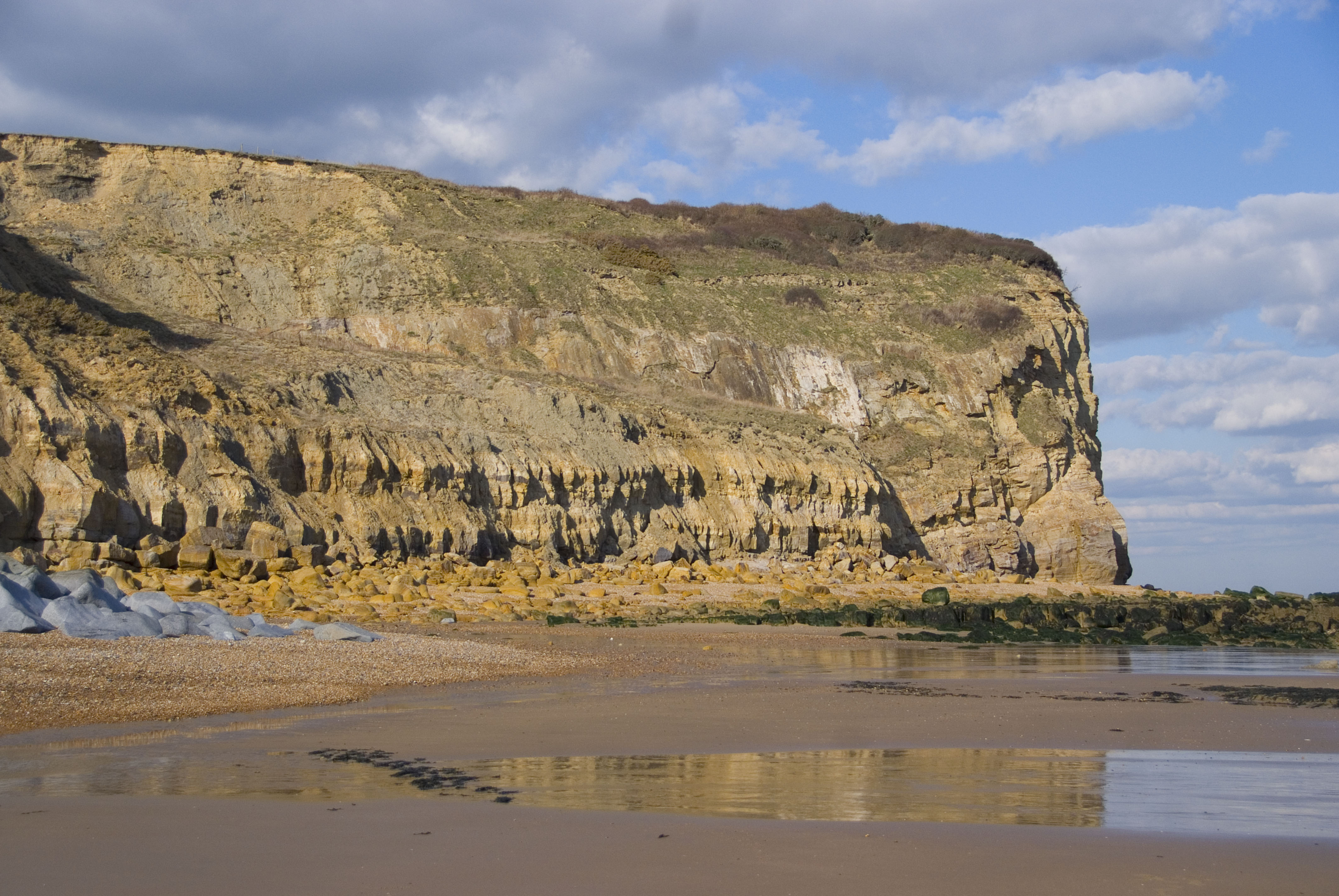 This popular location near Hastings has yielded some important finds over the years. Sharks’ teeth, plants, reptile remains and shells can all be collected, and the site is exceptional for small mammal and fish remains. Crocodile teeth can also sometimes turn up.

♦ Follow the coastal road past Fairlight to Fairlight Cove and then on to Pett Level. You will come to a pub called the Smuggler Inn. It is usually best to park in the car park immediately past the pub, as parking at the large car park is for customers only.
♦ There are public toilets just 50 yards away. There is alternative parking in a small car park at the toilet block, just before the pub. From here, you can walk along the promenade, from where you can gain access to the beach and cliffs.
♦ It is possible to walk to Fairlight from Hastings, but this is several miles and is not recommended, especially if you wish to return to Hastings on foot.
♦ Ref: TQ 88725 12859 – 50.88438°N, 0.68165°E

FIND FREQUENCY: ♦♦♦ – Fairlight yields excellent small fish and mammal remains in blocks of the ‘Cliff End Bone Bed’. These fall from near the top of the cliff, but can be difficult to find due to over collecting. However, there are usually a few blocks lying around.
CHILDREN: ♦♦♦ – Although Fairlight is suitable for families, the foreshore is very rocky and may not be suitable for younger children. Keep away from the base of the cliff.
ACCESS: ♦♦♦ –
Fairlight is fairly easy to access. There is good parking near the pub car park or at the toilet block. Parking may also be possible at the pub car park with permission. The pub owners are usually very friendly towards collectors, particularly if you intend to eat or drink there. Public toilets can be found down the road, just before the pub or at the pub itself if using the facilities. The pub also serves good food.
TYPE: – Most of the fossils at Fairlight can be found on the foreshore, especially after storms. However, fossils are also commonly found at the base of the cliff in the scree slopes. Extreme care must be taken and hard hats should always be worn, if collecting near the base of the cliff. However, we do not recommend this, as the cliffs are constantly crumbling and are very high.

When beginning at the beach at Pett Level, blocks of the Cliff End Bone Bed can usually be found lying on the ground and is packed with bones, scales and teeth. If you break open these blocks, you can see teeth from the fish Scheenstia mantelli (which was previously known as Lepidotes mantelli), and the shark Hybodus. A variety of shells can be seen and, very occasionally, insects have been found from this layer.

The grey clay is the ‘Unio Bed’, which contains the shells of the eponymous freshwater bivalve. These can be collected along the foreshore, where this layer is exposed. In this, if you are lucky, you can also find a whole range of different bones and teeth from dinosaurs, crocodiles and turtles. However, note that fossils from this clay are very fragile.

The commonest fossil is of the bivalve Neomiodon, which can be seen in many rocks and boulders. Plant fossils are common, especially the horsetail Equisetites. Lignite, often referred to as brown coal, is a soft brown combustible sedimentary rock formed from naturally compressed peat and is present in some rock layers.

The Fairlight area is the best location outside of the Isle of Wight for dinosaur remains. While not common, they can generally be found anywhere along the Fairlight to Hastings coastline, but are mostly fragments. Along the foreshore, past Fairlight Cove to the east, you can find dinosaur bones in the ‘Wadhurst Clay Ironstone’. Dinosaur footprints are a regular occurrence and these include those made by Iguanodon, Ankylosaurs and therapods.

Turtle remains have also been recorded. These bones are normally found in ironstone nodules, but are usually only fragments. Bones can also be found at the base of the cliffs, in the scree slopes.

At Pett Level just before Fairlight Cove, a submerged forest can be seen at low tide dating from about 5200 BC. During scouring, in a silt layer exposed on the foreshore, Iguanodon footprints have also been seen.

The section of coast between Pett Level and Hastings comprises layers of clay and sandstone from the valanginian age of the Lower Cretaceous. This was once a freshwater lake or lagoon and foreshore that once dominated the landscape. Sands and silt were transported by rivers and streams, to form the lake bed.

The first cliffs you will come to consist of the Cliff End Sandstone, which is made up of a series of sands and silts. This is part of the Wadhurst Clay Formation. Above the sandstone is the ‘Cliff End Bond Bed’, which contains fish scales, teeth and bones, and shark and reptile remains.

As you head west, you will come to a major fault at Fairlight Cove (‘Haddock’s Reverse Fault’) between the harder Wadhurst Clay at the eastern end and the softer Ashdown Formation to the west. This fault explains why the sea has rapidly eroded the cliff here and the need for coastal defence works. The Ashdown Formation is made up of sands and silts (including the Fairlight Clay, which can be dark grey, pinky or pure white in places) that can be seen exposed on the foreshore, in and to the west of Fairlight Cove.

At the top of the cliffs at Pett Level, there is a small amount of glacial sediment from a drift deposit.

Many fossils can be found either in blocks of the Cliff End Bone Bed or on the foreshore. The bone bed is very hard and you will need good splitting tools and hammer. It is also worthwhile taking some samples home to split in more comfortable surroundings.