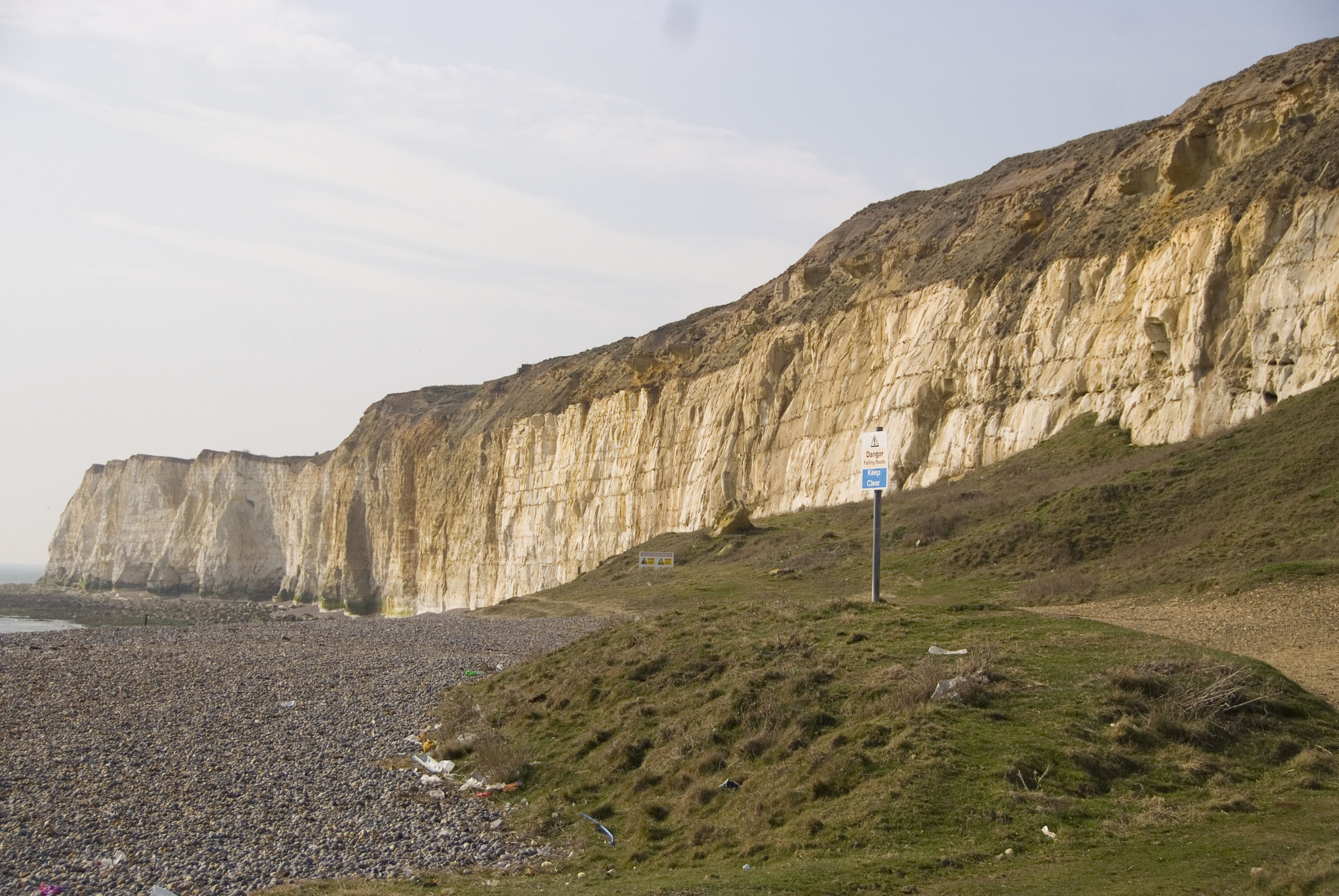 Many echinoids can be found at Newhaven, in particular, Offaster pilula, which is very common – certain chalk blocks can be split open to yield numerous specimens of this small species. Also abundant (but often incomplete) are Echinocorys. If you walk as far as Peacehaven, you may be lucky enough to spot giant ammonites (probably Parapuzonisa or Havericeras) in the wave-cut platform. Do not hammer or damage these. Leave them for others to see – they are too big to get home and should not be touched.

♦ The car park can be reached by driving to the end of Fort Road, on the west bank of the River Ouse estuary.
♦ You will have to pay to park here. From the car park, walk west for a short distance, past the nature reserve and onto the beach. Fossils can be found anywhere from here.
♦ If you walk as far as Peacehaven, you may be lucky enough to spot giant ammonites (probably Parapuzonisa or Havericeras) in the wave-cut platform.
♦ Do not hammer or damage these. Leave them for others to see – they are too big to get home and should not be touched.
♦ Ref: TQ 445 000 – 50.78172°N, 0.05455°E

FIND FREQUENCY: ♦♦♦ – Many specimens of Offaster pilula can be found by splitting the chalk blocks on the foreshore. Also found are Echinocorys echinoids, as well as bryozoans, corals, sponges and brachiopods, among other things.
CHILDREN: ♦♦♦ – There is a car park next to the beach at Newhaven and few hazards in the area nearest to it. This site is suitable for children. However, they must be supervised at all time and kept well away from the base of the cliff. Further on, there are boulders that need to be climbed over, which children may find hard going. Care must be taken near the cliffs and the foreshore can be slippery.
ACCESS: ♦♦♦ – The fossil collecting area at Newhaven is a short walk from the car park. At first, it is easy to navigate the wave cut platform, but there are many boulders further on and, in places, the rocks are slippery.
TYPE: – Fossils at Newhaven can be found in the chalk of the foreshore and also within boulders. However, the cliffs should be avoided and should not be hammered into.

Look out for chalk blocks which have numerous small, cut echinoids on their surfaces. If you break these open you should be able to find numerous specimens of Offaster pilula. In the chalk of the foreshore you will see many specimens of Echinocorys. Nearly all of these have been cut by erosion but if you look hard enough, complete specimens will be found. Bryzoa, brachiopods, crinoid pieces, bivalves and more can also be found. This is a diverse and productive location.

The cliffs and foreshore at Newhaven represent rocks from the Late Cretaceous epoch, from the Lower Campanian stage of c.  83.5 Mya. and follow a similar sequence to those displayed at Peacehaven.

The earliest Chalk at Newhaven belongs to the Lower Newhaven Chalk Formation and appears on the foreshore and rises to form the base of the cliffs. This is the Old Nore Beds and the giant ammonite Parapuzosia is found on the foreshore here. The lithography is very similar to Peacehaven, with the same fossils evident.

Moving up the cliff, the beds of the Newhaven Chalk Formation gently rise eastwards and are displayed as the Peacehaven, Meaching and Bastion beds. The Castle Hill Beds of the Lower Culver Chalk Formation, evident further west at Peacehaven, is no longer evident in the top section of the cliff at Newhaven.

There are obvious dangers from the cliffs, so keep a safe distance from them. In some places weed on the foreshore makes it slippery. It is possible to become cut off here so make sure you collect on a retreating tide. Mobile phone signals may be lost, so make sure someone knows where you have gone and what time you expect to be back.

A good, sturdy bag and plenty of packing material, as well as a hammer and chisel, are need at this location. Waterproof boots with a good grip will also come in handy.