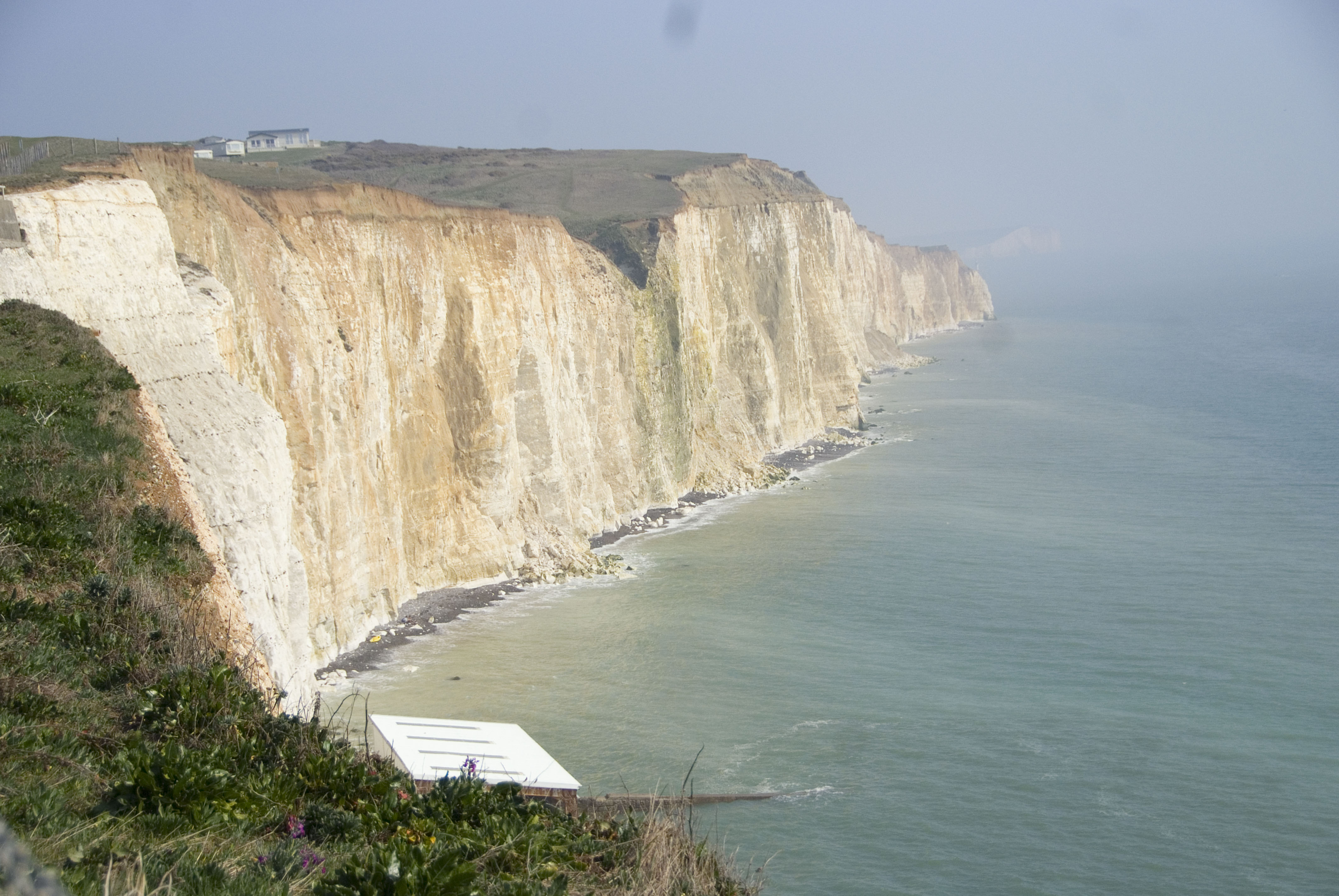 Some lovely echinoids can be found in the chalk at Peacehaven, including some superb, large Echinocorys cincta. This locality is also good for fish remains, which can sometimes be found on the foreshore. Fossils at Peacehaven are best found during scouring conditions. They can also be found in the fallen blocks on the beach.

♦ From the A259, head towards the eastern side of Peacehaven. Just before Peacehaven Heights, there are several roads leading to housing estates.
♦ Any of these will take you to a grassed parking area. DO NOT PARK on the grass area, park in any of the side roads, and then WALK to the grass area. The easiest and quickest access is Seaview Road.
♦ From here, walk towards the cliff top and then walk east towards the metal steps, which are known as the ‘Bastion Steps’. (There are quite a lot of them – 188 in all.)
♦ These will take you down to a sea wall and walkway below the cliffs. You can access the shore in several places by some more steps or you can walk to the main cliff to the east, at the end of the walkway.
♦ This main cliff is not protected by sea defences.
♦ Ref: TQ 42642 00294 – 50.78467°N, 0.02212°E

FIND FREQUENCY: ♦♦♦ – Fossils at Peacehaven are best found on the foreshore during scouring conditions. They can also be found in the fallen blocks on the beach.
CHILDREN: ♦♦ – This location is not suitable for families. The foreshore is rocky and the sea always reaches the base of the cliff at high tide. There are frequent rock falls here due to the rapid rates of erosion.
ACCESS: ♦♦♦ – Peacehaven is fairly easy to find and get to, and the fossiliferous locations are not too far to walk to. However, there are quite a number of steps down to the beach. The foreshore can be very rocky and is not suitable for young children.
TYPE: – Fossils at Peacehaven are mostly found simply lying on the foreshore, but they can also be seen in the rocks that have fallen from the cliff. Fossils are not only found from the main ‘unprotected’ cliffs, but can also be found behind the seawall, to the west of the steps.

Peacehaven is a popular location for echinoids, molluscs and fish remains. Echinocorys cincta is commonly found here on the foreshore or higher up in the cliff. Echinoid’s can also be found in flint on the beach. Most of the echinoid’s can be found in the chalk exposed on the foreshore. The largest come from higher up the cliff face, so can only be found in fallen boulders or loose in the shingle. Scouring conditions are best for this location, when clean chalk is fully exposed on the foreshore. Such exposures are also found on the beach below the sea wall defences, if the shingle and sand have been washed away.

The cliffs and foreshore at Peacehaven represent rocks from the Late Cretaceous epoch, dating between 83.5 – 78 Mya. (Campanian stage).

The earliest Chalk at Peacehaven belongs to the Lower Newhaven Chalk Formation and appears on the foreshore immediately north-west of the steps. This is known as the Old Nore Beds and it’s from these beds that the giant ammonite Parapuzosia is most found. These are a common find at Peacehaven.

Visitors to Peacehaven have to descend the 188 ‘Bastion Steps’ to the beach and they will need to climb back up them on their return. As always, common sense when collecting at all locations should always be used and you should check tide times before going as the sea always reaches the base of the cliff at high tide. In addition, the foreshore is rocky and there are also frequent rock falls due to the rapid rates of erosion.

Most fossils at Peacehaven can be found on the foreshore. Therefore, a pick or knife is ideal. Sometimes, fossils that have fallen from higher beds will require a chisel pick and/or chisels to remove.