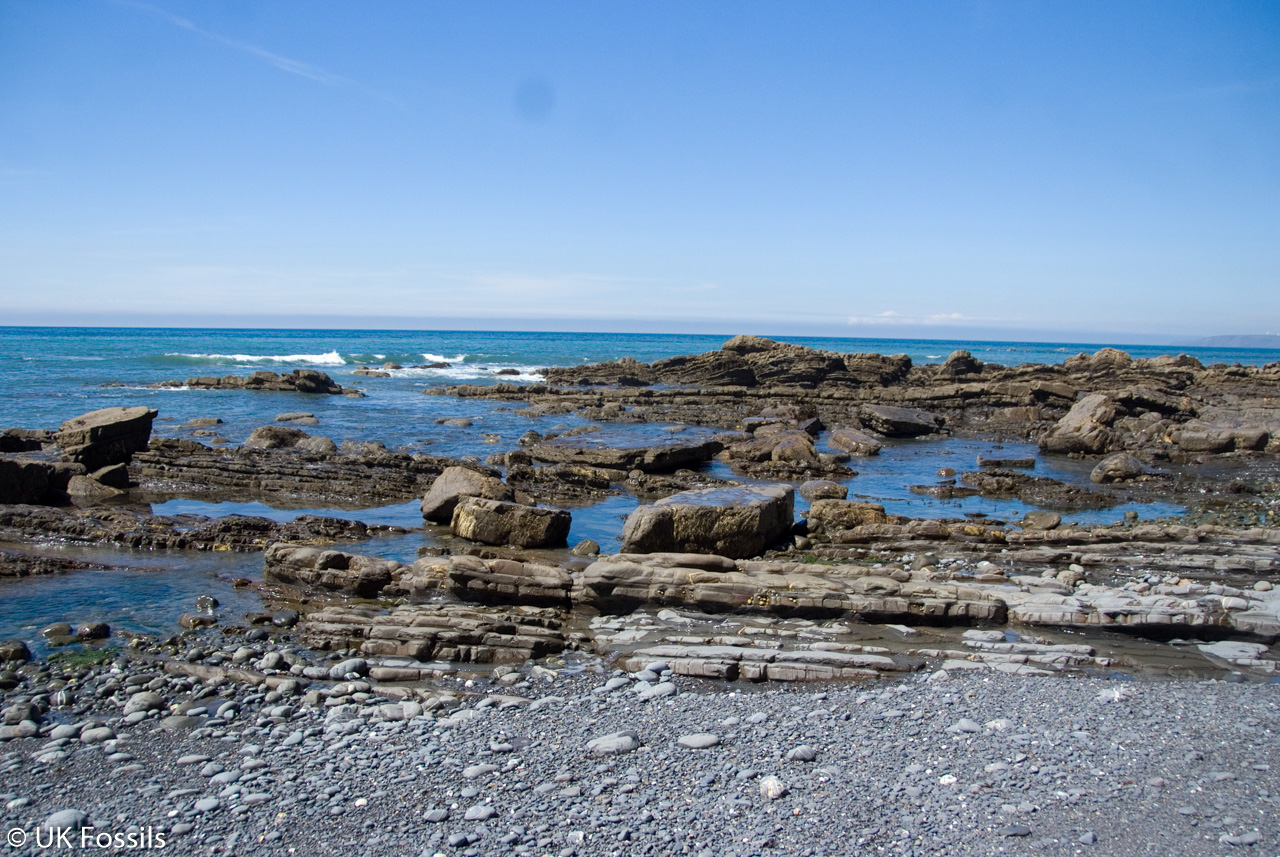 Foxhole Point features the Crackington Measures, which continue from Widemouth Bay. While it is possible to walk here from Widemouth Bay, it is best accessed from the village of Millook to avoid a long walk over difficult terrain. Plant remains and goniatites can be found here from the Upper Carboniferous.

♦ From the A39 at Coppathorne, take the road to Widemouth Bay. You will pass a pub/hotel before a sharp bend. Take the left hand bend and continue along the coastal road. You can also take the same road from Widemouth Bay itself, following the coastal road south until you reach the same bend.
♦ The road to Millook is narrow and not recommended for wide vehicles. When you reach Millook, you will come to a small bridge at the bottom of a valley.
♦ There is only parking for a maximum of two cars (which will leave enough space for other cars to pass over the narrow bridge). Parking is just before the bridge. If both parking spaces are used, there are sadly no others. Take the footpath to the beach and walk north. The road to Millook involves an extremely steep hill with a hair-pin bend.
♦ You really need a good car to climb this hill. Older cars, or cars with full loads, will struggle. An alternative route is to drive to Crackington Haven and then go on to Millook.
♦ Ref: 50.77593°N, 4.57409°W

FIND FREQUENCY: ♦♦ – Upper Carboniferous fossils can be found in the shale, but can be hard to locate. The best beds are found between the highest and thickest sandstone beds.
CHILDREN: ♦♦ – This location is not suitable for older children, since to get to the fossiliferous area, you have to walk over extremely slippery and steeply dipping bedrock. The beach itself at Millook is fine for children. However, there are no shops or toilets in the area.
ACCESS: ♦♦ – Millook is easily found, being on the coastal road. The fossiliferous area is also not far from the car parking area. The problem is that Millook has steep and narrow roads leading to a single lane bridge, with spaces for only two cars to park. These are taken up quickly, especially during peak season, so arrive early or take the much longer walk from Widemouth Bay.
TYPE: – Fossils can be found in the cliffs and foreshore deposits. However, the only fossiliferous bed is at the northern end of the beach at Millook at Foxhole Point. You will need to visit during a low or fairly low tide.

Continue until you reach the very end of the beach. This is Foxhole Point. Here, large boulders and steeply angled bedding plains sandwich thin layers of shale between thick layers of sandstone. This shale, which is grey-lilac or grey coloured, contains goniatites (Reticuloceras superbilingue) and plant remains (Donetzoceras sigma). Some of the rocks dip by up to 45 degrees and can be difficult to collect form. Certainly, the slippery surfaces of these rocks can make collecting here quite dangerous.

Millook exposes sandstones, shales and slates from the Crackington Formation of the Silesian (Upper Carboniferous)

The centre of the bay is geologically important for a series of faulted zigzag folds in the sandstones and shales. These form part of the 92m-high cliff at Bridwell Point.

At the northern end of the beach, thick sandstones are interbedded with thin shales, which have been dated as Namurian in age and are grey to lilac-grey in colour. These contain both plant remains and goniatites.

Most of the beach at Millook is fairly safe. However, the northern end is constantly being eroded, with fragile cliffs that are regularly crumbling and overhanging. These should be avoided. At Foxhole Point, the sea always reaches the base of the cliff. Therefore, always check tide time before you visit and ensure you allow enough time to return before the tide starts to turn. The rocks and bedding plains here are extremely slippery and are made worse by the steep angle of bedding. Some of the rocks are covered in barnacles and these are the safest to walk over, offering a natural grip.

A hammer and chisel, together with safety goggles, are the best tools for this location. The lilac and grey shales are easy to split and the best rocks are those found loose on the foreshore. We highly recommend footwear with a good grip, due to the steeply dipping and slippery rocks.

This site is an SSSI. This means you can visit the site, but hammering the bedrock is not permitted. For full information about the reasons for the status of the site and restrictions please download the PDF from Natural England – SSSI Information – Foxhole Point