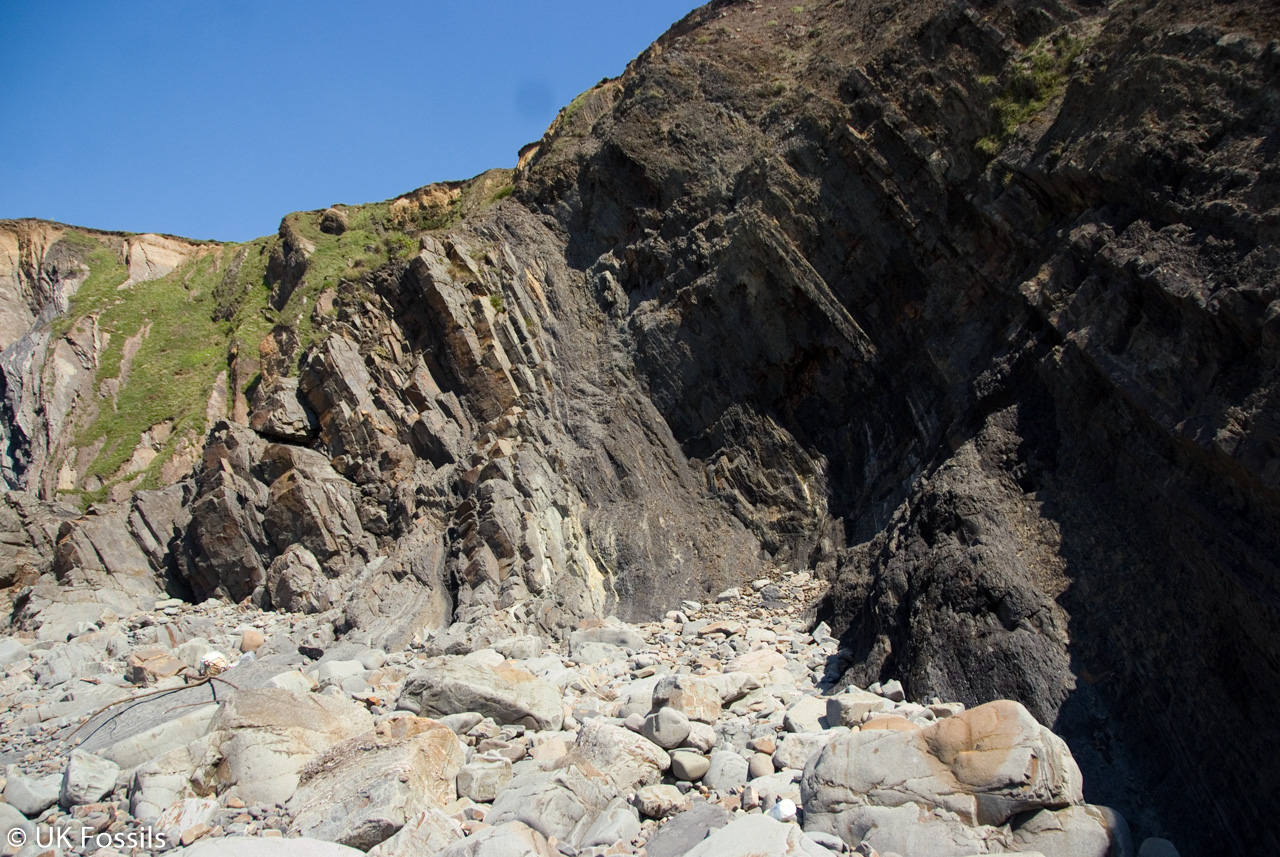 Upton Cross is situated between Widemouth Bay and Bude. The Bude Formation, which is Carboniferous in age, sandwiches outcrops of shale at two areas of the cliff and foreshore. These contain nodules that yield fish remains, worm tubes and tracks.

♦ Follow the coastal road from Widemouth Bay to Bude. As you approach Upton Cross (which consists of a few houses on both sides of the road seen from a distance), you will find a small lay-by, with enough space for three small cars. Park here.
♦ Take care when parking as a large concrete block protrudes from the centre of the lay-by. Walk along the coastal footpath towards Upton and, about 110m south of where the houses start, you will see access down to the beach by another path.
♦ This is hard to see from the road, but if you follow the coastal footpath you will easily find it. Follow this footpath down to the beach and walk northwards.
♦ There are two areas of fossiliferous nodules. The first is a vertical section of shales just before the huge stack at the headland; and the second is a much better section of vertical shale seen further round the corner, north of this stack.
♦ Ref: 50.81479°N, 4.55550°W

FIND FREQUENCY: ♦♦ – The nodule bed is fairly easy to find. However, not all the nodules contain fossils. They are also very hard and not easy to break, making collecting more difficult.
CHILDREN: ♦♦♦ – The beach here is suitable for children, with plenty of rock pools to explore. However, it is a fair walk down and as this is not a popular tourist beach – you will not find any toilets or lifeguards. The beach also consists mostly of pebbles. Towards the stack, the foreshore becomes rocky and this is not suitable for younger children.
ACCESS: ♦♦♦ – It can be a bit of a fight for car parking space in the small lay-by at Upton. However, if you do manage to get a space, it is fairly easy walk to the beach, providing you don’t mind the steep descent.
TYPE: – Fossils are mostly found in nodules, which are seen in sections of shale with vertical bedding. The shale beds are easy to find, as there is only two areas where the shale outcrops as thicker units, and these are sandwiched between sandstones of the Bude Sandstone.

Once you enter the beach, walk northwards until you come to a very large stack (which, in the GA guide The North Coast of Cornwall from Bude to Tintagel, is described as an arch, having collapsed since the book was written). Just to the south of the stack is an area of shale in the vertical cliffs. This particular section can contain nodules, but they are much rarer. However, this is the only section that yields fragments of the fossil fish Cornuboniscus budensis.

North of the stack at the headland, you will come to a much bigger section of shale, also in the vertical cliffs towards the middle part of the next bay. This is approximately 300m from where you first enter the beach. The nodule bed is about 7m thick, but a further 11m of black shale is also present, making it very easy to locate, since the shale rests between the thickly bedded sandstones.

Within this nodule bed, the highest beds contain flat, disc-like septarian nodules, which contain worm burrows, fish remains and xiphosurid (arthropod) trails. Polished concretions are found in the middle part of the bed containing just worm burrows and the lowest beds contain sandy nodules, which are not fossiliferous. Note that because the beds run vertically, the highest beds referred to are found on the north side of the shale section.
The same bed can also be found on the foreshore, about 11m to the south, by a geological fault.

The Bude Sandstone at Upton Cross is Silesian (Upper Carboniferous) in age (~310 mya ) which is from the Westphalian Stage (Langsettian to Bolsovian Substages).

At the point when you first enter the beach, you will note that the rocks in the cliff are poor exposed due to landslips, although the folds in the thick sandstone can be seen at the top of the cliff section. The Wrench-fault can be seen underlying a storm beach, and passes close to the small stack, where the first nodule shale section outcrops. North of the stack, a fine-grained sandstone dominates the cliff section, with outcrops of siltstones, mudstones and shale.

This location should be visited on a falling tide, around three hours after high tide. The water always reached the stack and headland making it easy to get cut off. Therefore, you should check tide times before you go. Around the headland, the steep, tall cliffs are also dangerous. Keep away from the cliff faces at all times.

A splitting hammer and safety goggles are definitely required here to split the nodules. Please note that you can only split the fallen nodules from the beds due to SSSI restrictions on hammering the bedrock and cliffs.

There are currently no known restrictions at this location. Although you are free to collect rocks and fossils, and use geological tools such as hammers, it is important you follow our national fossil code of conduct.