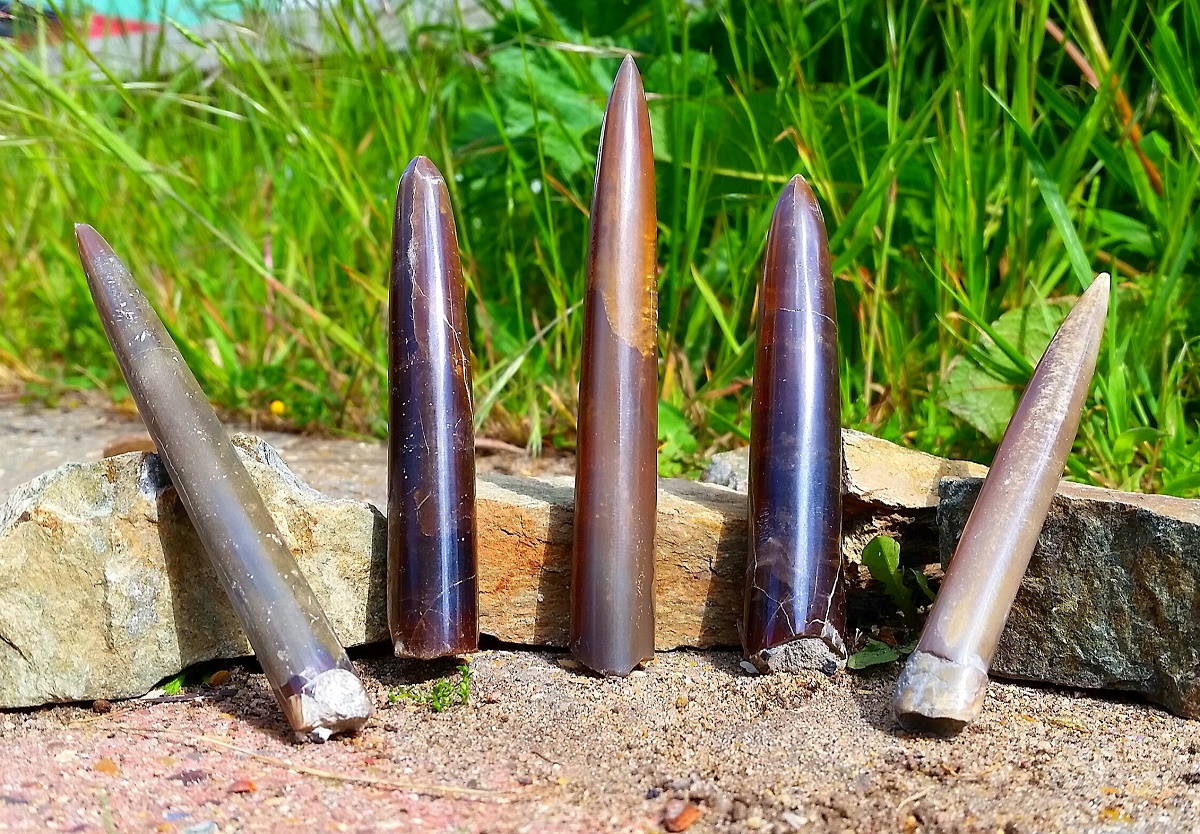 Belemnites (Belemnitida) were squid-like animals belonging to the cephalopod class of the mollusc phylum, and therefore related to ammonites of old, as well as to modern squids, octopuses and nautiluses.

Now extinct, their fossils are found in rocks of Jurassic and Cretaceous ages, with a few species hanging on into the early part of the Tertiary. The animal’s soft parts very rarely fossilise, leaving us with only the hard parts: the guard and the phragmacone.

The belemnite animal with a section of the flesh removed to show the internal hard parts. Picture courtesy of Charlotte Miller.

The belemnite guard is bullet shaped and, indeed, these fossils were commonly called ‘bullet stones’ in times past. This part of the creature, located furthest from its head, was composed of calcite and tapered to a point at the extremity. At the end closest to the head, the guard was indented by a conical cavity called the alveolus. Within this was found the base of the phragmacone.

It is thought that the guard acted as a counterweight to the phragmacone. Guard fossils are nearly always composed of calcite.

The phragmacone extended out of the guard. It was a conical structure, divided up by simple, concave sutures and was used to regulate the animal’s buoyancy. This part of the belemnite is less commonly found as fossils than the guard, due to its more fragile nature. However, when found, it may be preserved in a variety of different rock or mineral types, such as mudstone, pyrite or calcite, and may be inflated as in life or crushed flat. Sometimes, the phragmacone and guard fossils can be found still attached to each other.

From the wide end of the phragmacone extended a thin, paper-like structure called the pro-ostracum. This is only very rarely found fossilised.

Where abundant, belemnites are sometimes used in stratigraphy, for example, the Belemnitella mucronata zone of the Campanian stage of the Chalk.

Megatheuthis guard, from the Inferior Oolite.

Neohibolites minimus guard, with a section removed to show the alveolus.

Megatheuthis guard, eroded to show a portion of the phragmacone situated within the alveolus of the guard.

Many belemnite guards in a boulder.