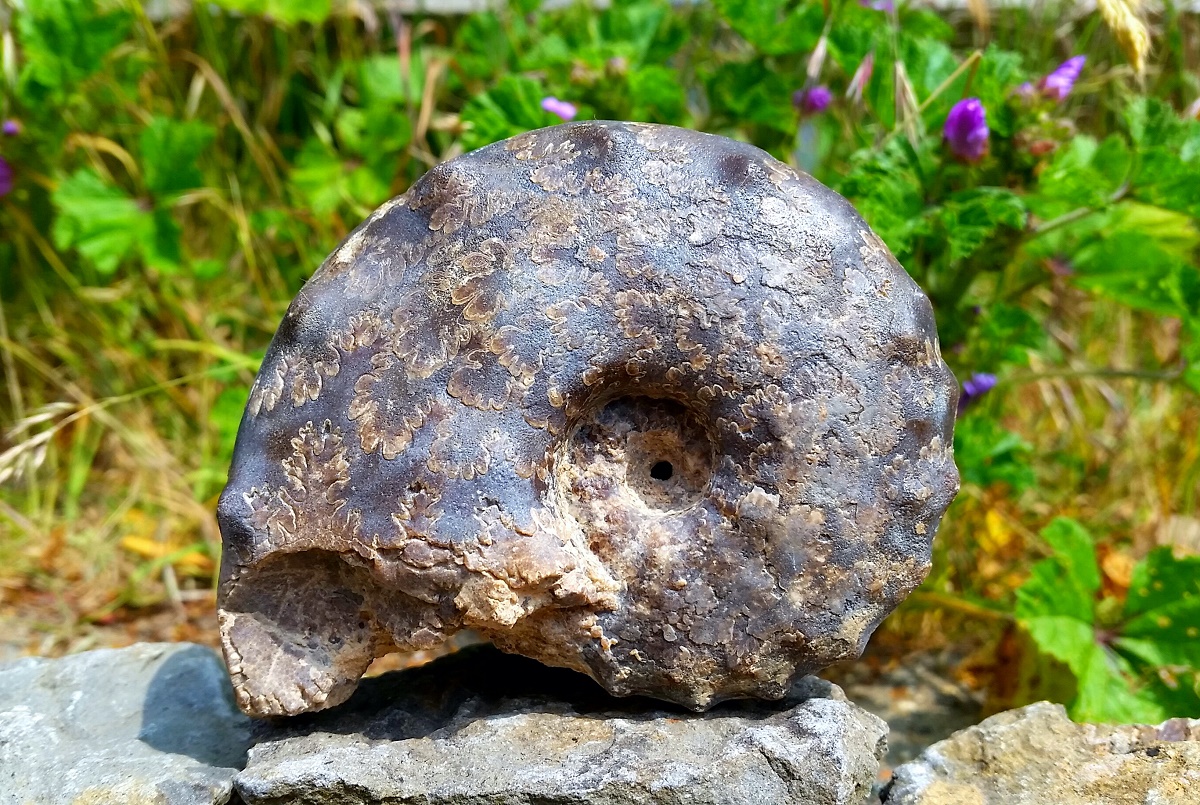 Ammonites (Ammonitida) were shelled cephalopod molluscs that lived throughout the world’s oceans during the Mesozoic (Triassic, Jurassic and Cretaceous periods) and they were an extremely successful order, as evidenced by the frequency with which their remains are found.

Ammonite shells (apart from in the heteromorphs) all follow a similar basic design, which is that of an expanding cone, spiralling around a centre point, in a single plane. In other words, they are generally a flattish spiral, which gets thicker with each whorl.

In transverse cross section, the whorls of different ammonite species can show various profiles. Some are fairly square (for example, Acanthoceras), while others are more rounded (for example, Dactylioceras) and some very slim (for example, Placenticeras).

Heteromorph ammonites had a variety of shapes, including the basic ammonite spiral, only uncoiled (each new whorl not touching the last), a spiral that became significantly uncoiled in the lead up to the animal becoming mature, and upwards coiling spirals, like the type we see in snail shells, to mention but a few.

The actual aragonite shell of the ammonite creature is often lost during fossilisation, to leave us with internal mould fossils. These are basically a copy of what the outside of the shell looked like, only a tiny bit smaller.

In cases where the shell does survive, mineralisation of this can lead to some beautiful ammonite specimens, for example, those of the Gault Clay in England and the Bearpaw Formation of Canada and the USA.

Ammonite shells often have ornamentation, consisting of some or all of the following:

An internal mould will show all of the above ornamentation, if present in the actual shell (except for the lappets and spines at the aperture, and the growth lines), along with the addition of suture lines. Sometimes, these are not easy to see, but that does not mean they are not present – all ammonites have them. Sutures are intricate patterns that run across the whorls and show how the outer edges of an ammonite’s chambers fit together. The shapes of the lines are often used to aid in taxonomy.

It is thought that ammonites had these complex interlocking chamber shapes to give the shell more strength, so that the animal could dive to greater depths without being crushed by water pressure. This may be true, but it has been shown that nautiluses can (and did) dive deeper than ammonites, but these animals have very uncomplicated suture lines. The reason for the nautilus’ greater depth tolerance, while retaining simple sutures, is simply that they have thicker shells than the ammonites, which evolved a different way of strengthening themselves.

If a suitable, a complete ammonite fossil can be cut in half in equatorial section and then polished, revealing the chambers of the animal’s shell. These can be divided into the phragmocone and the body chamber.

The phragmocone consists of many generally equally proportioned chambers, which begin at the centre of the ammonite. These were used as buoyancy aids and were filled with gas. When new chambers were formed, a tube called the siphuncle was used to transfer liquid from them, to maintain the animal’ s buoyancy. The siphuncle is usually only seen in very small portions in cut ammonites and is generally much more noticeable in a nautilus shell, where it can be seen roughly in the centre of the whorls. However, in ammonites, it is found along the outside edge (venter) of the whorl.

The body chamber is the final, longest chamber, in which the ammonite animal actually lived. It is not divided by sutures and is often fossilised in a different colour to the phragmocone chambers, as sediment readily filled it after the creature died and its soft parts rotted away. However, the chambers of the phragmocone are largely sealed off from the body chamber and, because of this, they are usually mineralised over a longer period, due to percolation of mineral-rich water through the shell.

A Dactylioceras commune ammonite, from the Upper Lias, cut in equatorial section and polished. The phragmocone chambers have been filled by minerals, while the final body chamber was fossilised a dark grey colour, as it was filled with mud soon after the death of the ammonite. 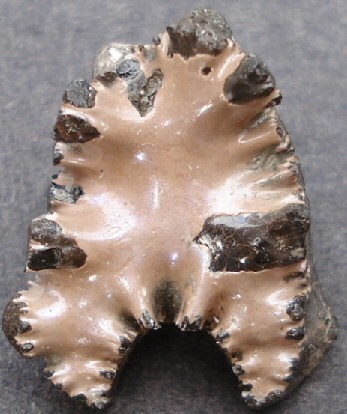 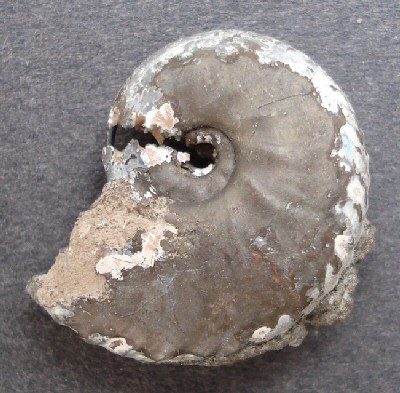 A pyritic ammonite that is missing a single chamber from its phragmacone. This has revealed the siphuncle tube.

Some ammonites (for example, Kosmoceras jasoni) displayed sexual dimorphism, where the female (macroconch) of the species was larger than the male (microconch). It is thought that this was so the female could accommodate a brood of eggs within the shell. While sexual dimorphism in ammonites is a well known phenomenon, it can be difficult for the amateur to apply. This is because the different characteristics are generally only shown at maturity (which is not always very obvious) and usually only on whole specimens, with a full body chamber (again, which is not always very obvious).

Ammonites are extremely useful to stratigraphers for a number of reasons:

When correlating the ages of different sites across a country, a continent or the world, ammonites are often used with great effect. For example, a species found in England, with a geological range of a million years, can be correlated with the same species found elsewhere and hence can provide a relative date for the foreign site and to within a million years, if the actual (chronological) date is known.

Because of the ammonites’ importance to stratigraphy, rock layers or groups of layers are often named after a particular species that is abundant within them, for example, the Falciferum zone of the Upper Lias, named after Harpoceras falciferum, and the Dentatus zone of the Lower Gault, named after Hoplites dentatus.

Transverse section through an Arnioceras ammonite, from the Middle Lias. Specimen courtesy of Fiona Jennings. 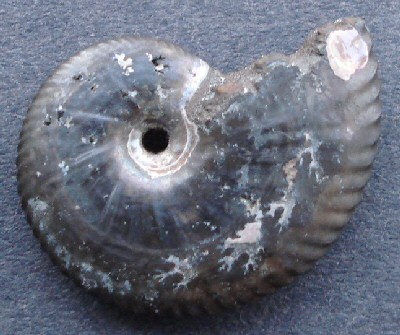 Anahoplites planus, from the Lower Gault – an example of involute coiling. 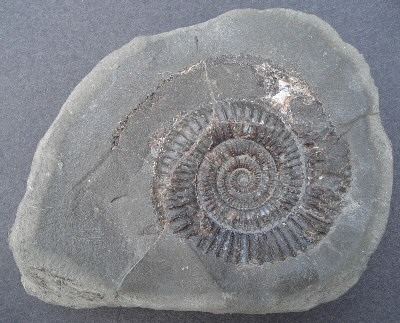 Dactylioceras commune, from the Upper Lias – an example of evolute coiling.

Hamites gibbosus, a heteromorph ammonite from the Gault Clay.

Baculites, a heteromorph from the Lower Chalk. 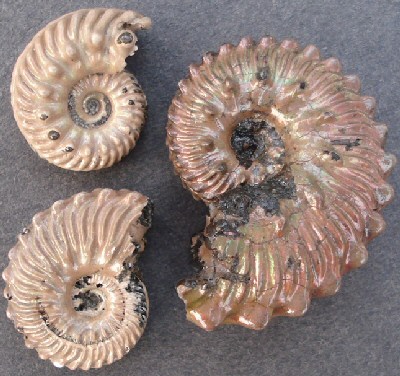 Euhoplites ammonites from the Gault Clay, with their shells intact. 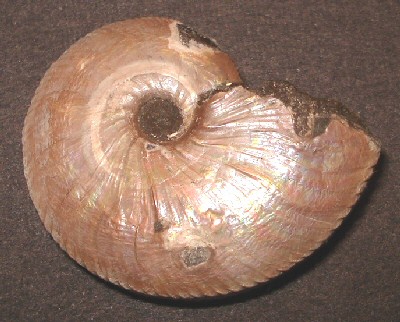 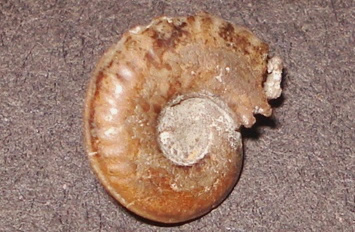 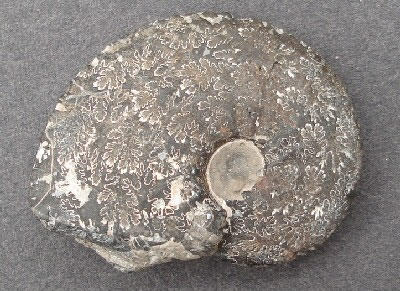