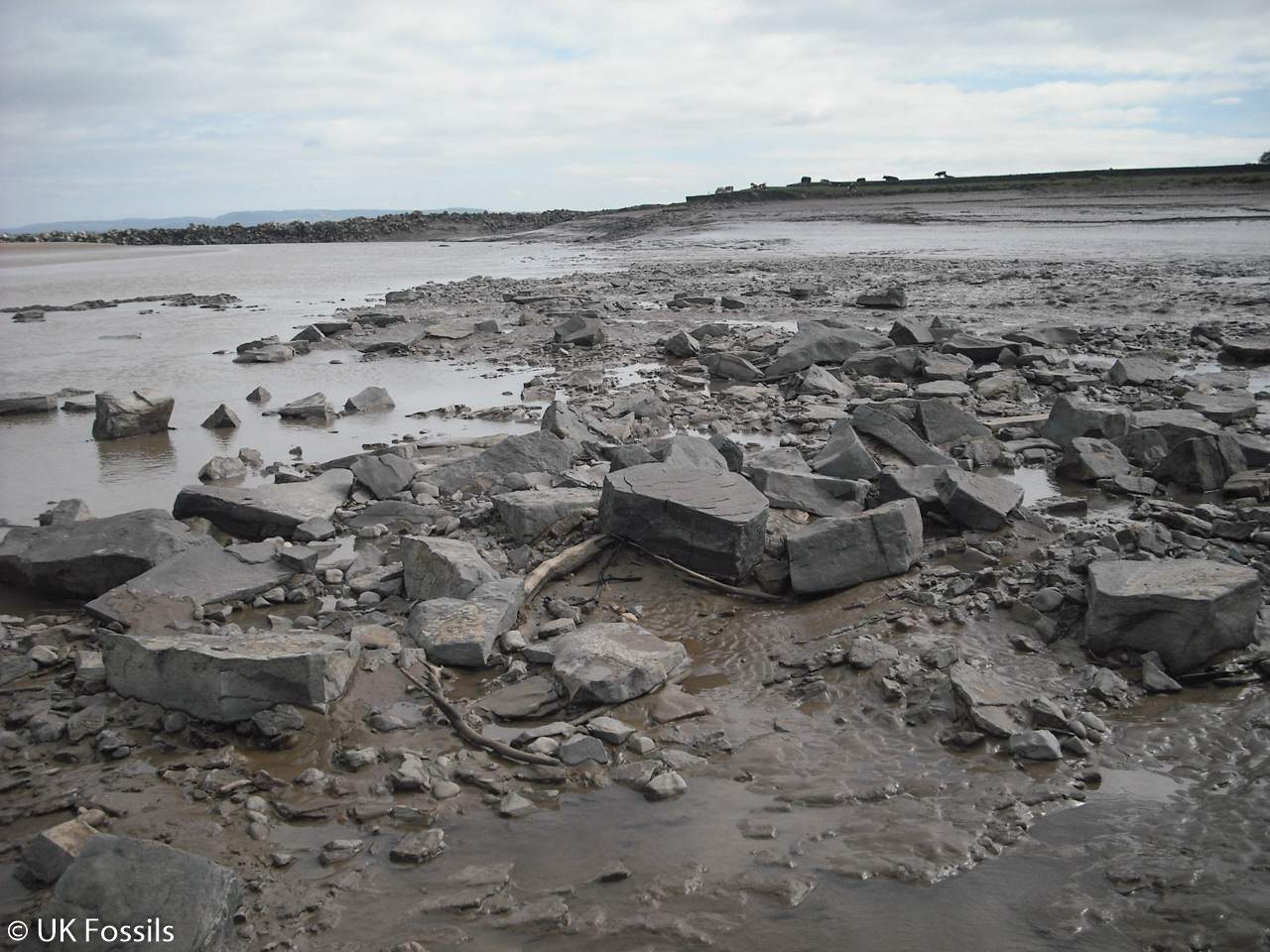 The actual site is a foreshore location on the eastern shore of the River Severn to the west of Tites Point, in Gloucestershire. At low tide, the Silurian Ludlow beds are exposed, yielding a range of fossils, including seeds, plants and molluscs. However, of most importance is the abundance of fish remains from the Ludlow Fish Bed.

♦ Tites Point is situated near the village of Purton, which is north of Sharpness. Purton can be reached by crossing the canal by car or foot, which has an automatic swing bridge. Park on the verge just before the Berkeley Arms pub. Note that it shuts at 2.00pm and the gates to the car park are locked.
♦ Therefore, don’t use the pub car park. Take the public footpath for 275m and you will find access to the foreshore after the “Private” sign. Note that this refers to the field rather than access to the foreshore.
♦ Ref: 51.738745N, -2.452992W

FIND FREQUENCY: ♦♦♦♦ – There is a very high chance of finding fossils at this site, although the most favourable conditions are during winter and spring scouring tides. Tites Point is more widely known for its abundance of fish remains, but fossil seeds, plants and molluscs are just as common.
CHILDREN: ♦♦♦ – The expansive tidal mud flats makes this site difficult for children to visit, with the only nearby toilet in a pub. We only recommend this site to older children, who can visit the eastern side, but should not visit the western side, which has very deep mud.
ACCESS: ♦♦♦ – Getting there is a quick and easy route by foot, but the actual site can be hard to find. Locate Sharpness on the map and Purton is to the north. The local pub does not do food or hot drinks, and shuts at 2pm. Unfortunately, this is also where the only toilet in the area is. The foreshore is very muddy and can be tricky to walk on for the very young and old.
TYPE: – Tites Point is a foreshore location on the eastern shore of the River Severn, to the west of Tites Point, in Gloucestershire. Fossils can be found at low tide, from the exposed Ludlow rocks.

When you reach the foreshore, the rocks should be visible almost immediately, providing you visit on a low tide. There are two ends of Tites Point to visit. To the east, plant remains, fossil seeds, bivalves and brachiopods can be found by splitting the mudstone and limestone layers. But the best beds can be found at the base of the Thornbury Beds, exposed at Tites Point itself, and along the western side of Tites Point. These are packed full of fish remains. Sadly, the western side is the hardest to access, as the mud is extremely thick, so care must be taken when visiting. The most common fossils here are fish remains, such as head shields, scales, spines and teeth. Species of fish include Cyathaspis banksi (a primitive heterostracan, which are extinct jawless vertebrates), Thelodus parvidens, T. bicostatus, T. pugniformis, T. trilobatus, Acanthodii incertae sedis and Onchus sp. 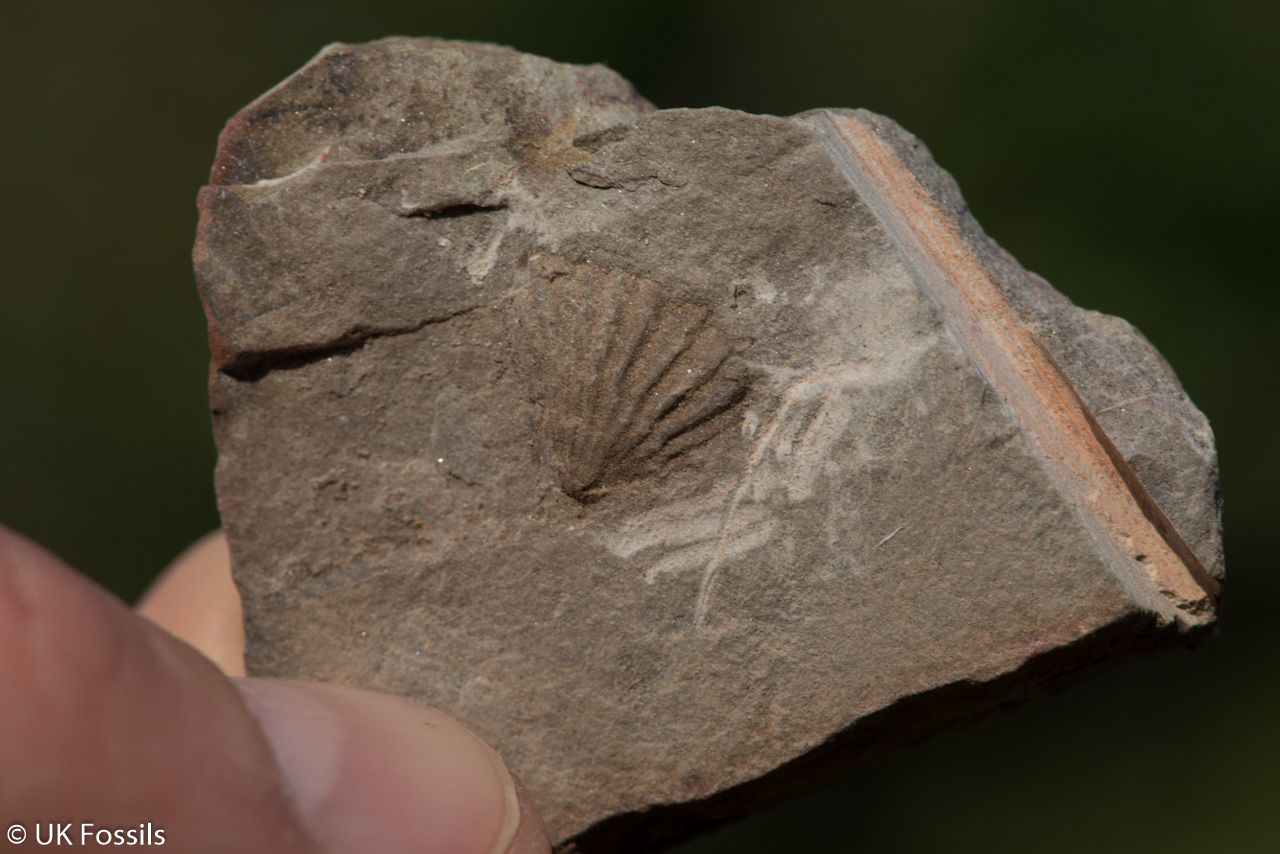 This site is a limited exposure of Silurian rocks, situated on the eastern shore of the River Severn, to the west of Tites Point. Here, the Leintwardine (Ludlow Series) and Downton Castle Sandstone Formation of approximately 423 Mya, are exposed.

The Whitcliffe Formation is of the greatest importance and consists of a succession of silty mudstones, siltstones and thin limestone layers, the latter occurring particularly in the upper part of the sequence and contain a high concentration of brachiopods, worm tubes and fish denticles. The silty mudstones contain layers of white sand drift, mixed with shales and calcareous matter, which all yield fish scales and teeth. These layers are referred to as the ‘Ludlow Bone Bed’

The Whitcliffe Formation is overlain by 1.7 m of the Downton Castle Sandstone Formation and above that, the Thornbury Sandstone. which can be seen at the western end of the section; and displays sandstone channels cutting into the underlying fine-grained sandstone at the top of the Whitcliffe Formation. This sandstone is rarely seen, because all but the tops of one or two harder bands are hidden under thick, glutinous estuarine mud, and the rock can only be examined after exceptional conditions have swept this away.

All but the tops of one or two harder bands are hidden under thick glutinous estuarine mud, which makes this site totally unsuitable for children.

Common sense when collecting at all locations should always be used and you should be aware of tide times before you go, as tides are the main danger at this site. With double tides and the Severn Bore, there is normally less than five hours between high and low tide. Be sure to get the very latest tide times for your trip and keep a watch for the incoming tide. The other danger is the thick mud, which can be extremely deep at the western end.

A pick hammer is the most useful tool here, along with chisels. Wellington boots are essential, as the foreshore is very muddy.