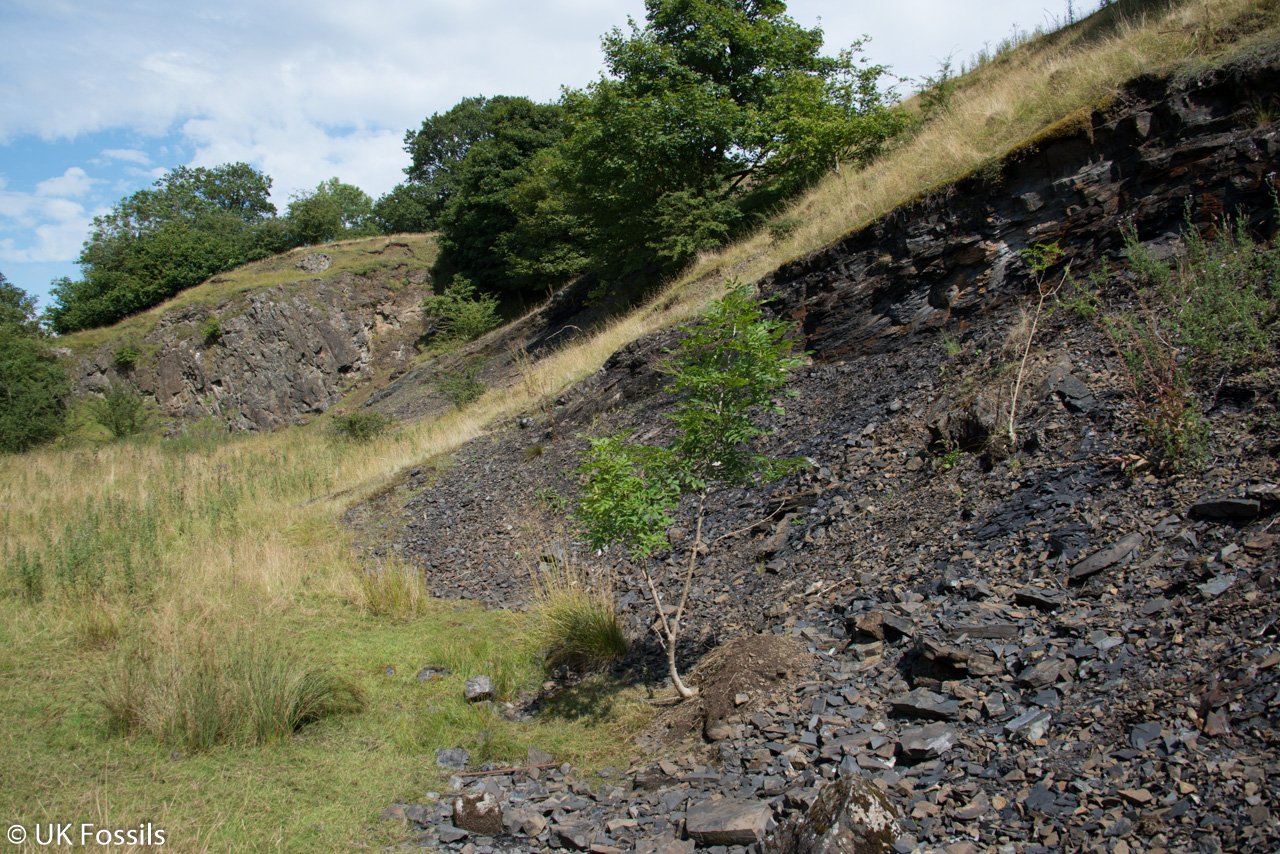 These series of disused quarries, in Llandrindod Wells, are rich in trilobites and graptolites. The largest of the quarries has deep water (also shown on OS maps), and is now fenced over following an accident in which a child sadly drowned. A second quarry, slightly further to the northeast, contains no water and has easy access, with productive shales.

♦ From Llandrindod Wells, follow the A483 northwards. A minor road to Noyadd can be found to the west, which is part the hospital road, if travelling from the south. This will take you to the farm at the top of the hill. The farmer here is more than happy for you to park at the bottom of the farm, where a footpath leads to the back of the quarries, and will even give you directions and advice. However, out of courtesy, you should ask before parking. The public footpath runs through a small field, with a mobile phone mast at the top. Use the mast as a marker for finding this location.
♦ Simply walk up to it, then carry on up the bank. (This can be a little overgrown with large nettles, so avoid wearing shorts.) Once past the mobile phone mast, veer down the hill to your right, then immediately at the bottom continue left, following the fence at the edge of the next field.
♦ At the end of this field, there is a style. Climb over and walk left, then immediately follow the edge of the next field to the right. This continues in the same direction and heads downhill with the quarry visible on the left hand side. At the bottom of the hill, a clearing will allow easy access to the back of the quarry.
♦ Ref: 52.246032, -3.370807

FIND FREQUENCY: ♦♦♦♦ – This quarry is very productive in graptolites and trilobites, but most of the latter are just separate heads or tails. Collecting is only permitted from the large scree slopes due to SSSI rules and the scree has become over collected, which is why complete specimens are now much rarer.
CHILDREN: ♦♦♦♦ – Providing children do not climb the scree slopes, which can be slippery with the loose rocks, this location is ideal for children.
ACCESS: ♦♦♦ – The site can be a little complicated to find and some areas can be overgrown, depending on the time of year. The farmer allows parking at the bottom of his farm and a public footpath takes you alongside the quarry. There is easy access into the quarry.
TYPE: – There are a series of quarries in this area, the most famous being the one containing the lake, but this is dangerous and is now fenced off. A second, safer and unfenced quarry allows easy access and is recommended for those visiting. Other smaller quarries exist, but are overgrown.

Although there are a number of quarries in the area, there is only one which can now be collected from. The largest quarry is fenced off, as it contains deep water; and the smallest are overgrown and have become difficult to collect from. The good news is that the second largest quarry is both highly productive and also has easy open access.

These quarries are SSSIs due to their importance for studying fossils of Ordovician animals and their environments. They are also all highly productive. A variety of species have been recorded from the site, including the characteristic graptolite, Nemagraptus gracilis, and the trilobite, Ogygiocaris buchi. Most of the trilobites are now just heads or tails, because this site has been over collected, with little fresh material falling from the stable scree slopes. Nevertheless, graptolites are plentiful, and trilobite remains very common (but with complete trilobite specimens being much less common).

The rocks of the Llanfawr quarries are Ordovician in age (495 Mya) Abereiddian Stage of the Caradoc Series and are the highly fossiliferous Llandeilo-basal Caradoc shales, siltstones and mudstones, mostly from the Llanfawr Mudstone Formation, a grey mudstone with interbedded tuffs. These are intruded by dolerite. Mudstones occur in three quarries, the lower, main and upper
There are four Llanfawr Quarries. These dolerite quarries near Llandrindod were excavated for building stone in the 19th and early 20th centuries. Three of these quarries constitute a SSSI and permission to collect must be sought from the Countryside Council for Wales
In the upper quarry, the fossils are preserved in iron pyrite, hosted in black mudstones of basal Caradoc (basal Upper Ordovician) age, immediately adjacent to a quarried-out dolerite laccolith, an igneous body that is also exposed in the sides of the quarry. The site has been used for generations by collectors and field trips, due to its exquisitely-preserved graptolites, and abuts the main Llanfawr Quarries SSSI but since 2016 is now no longer accessible to members of the public.

The largest of the quarries is now fenced off following the drowning of a child several years ago. The deep water at the bottom makes this quarry too dangerous to collect from. A second, smaller quarry provides much easier access, with plenty to be found. With 40 degree scree slopes and easy access, this provides a much safer environment to collect from. Be aware of snakes (adders) in the long grass.

Splitting hammers can sometimes come in handy for any large loose rocks, but by far the best way of finding fossils is simply to turn over the loose shale. You will find far more trilobites and graptolites this way, than by using a hammer or chisel. Take lots of paper to wrap your finds in.