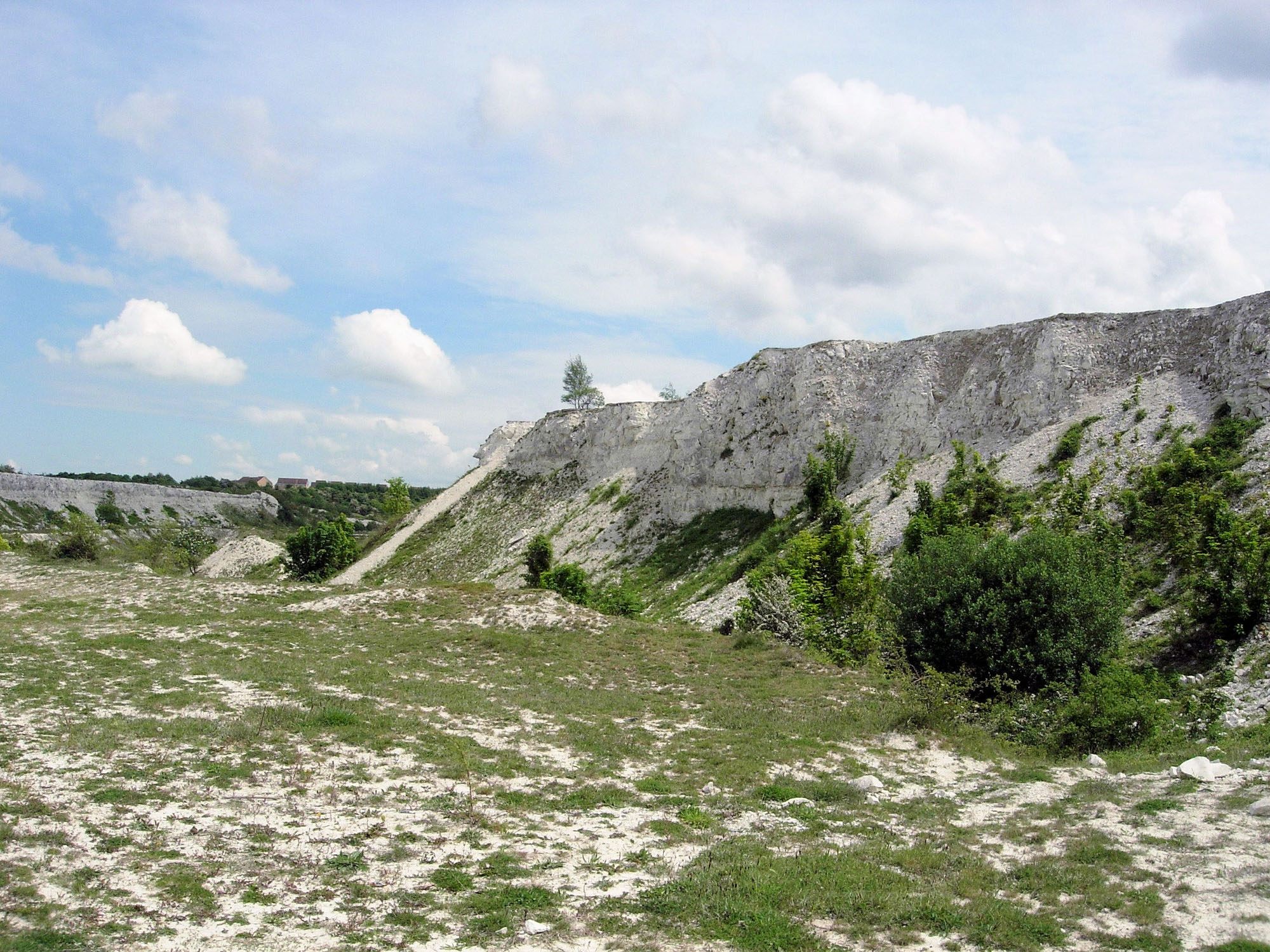 Houghton Quarry is an abandoned quarry, formerly used to extract chalk for a cement works onsite (which is no longer there). Quarrying stopped about 40 years ago, but, due to its size and terracing, only parts are overgrown, leaving an enormous amount of clean chalk. A large amount of this consists of boulders of various sizes on the quarry floor, yielding many good fossils. Collecting is not allowed here.

♦ Park at the White Lion public house (LU6 1RS) and cross the main road (A5) at the central bollards, a few metres to your right as you leave the car park. Almost in front of you is a signpost for the ‘Icknield Way’ footpath, which takes you down some steps to the track at the bottom of the embankment in front of a row of cottages.
♦ However, it may be easier for you to walk to the right to the track entrance, at the end of the cottages. In both cases, when finally on the track, turn left and follow the footpath that turns right along an alleyway between two properties (Icknield Way). Follow this all the way to the field at the end. When you get to the field, follow the path along the bottom of the field until you get to a track on the right, which takes you up the hill to a gap in the hedge and into the quarry (300m from road to quarry entrance, mainly uphill).
♦ The alternative entrance is reached by parking in Millers Way and walking back to the A5120 (Houghton Road). From there, walk a few metres west towards Dunstable and follow the footpath (through the new houses) to a T-junction, where, ahead of you, you will see gates and to the right of these is the old footpath leading to the new kissing gate into the quarry.
♦ Follow the track west until you see the cliffs ahead of you and head towards them.
♦ Ref: 51.90126°N, 0.53519°W

FIND FREQUENCY: ♦♦♦♦ – Despite this quarry being worked for over 40 years, there is still plenty to see, with good clean chalk faces, and many boulders and scree to look at. Collecting is not allowed by the owners, The Wildlife Trust.
CHILDREN: ♦♦ – Although fossils can be collected by examining boulders on the quarry floor and paths, we cannot recommend any large quarries for children for health and safety reasons. In addition, this site is now designated as a nature reserve. Therefore, care must always be taken not to damage or disturb the flora or fauna.
ACCESS: ♦♦♦♦ – There is an easy, 300m walk along the Icknield Way footpath from the White Lion pub car park (uphill) or about a 1km walk (flat) from on-road parking in Millers Way.
TYPE: – Fossils can be found on the quarry floor and in the cliff sections.

Ammonites are sometimes seen as internal casts. In addition, the lined burrows of Terebella, and brachiopods, bivalves, gastropods (internal casts), shark coprolites, sharks’ teeth, fragments of plant material and random fish scales/bones can all be found.
The easiest way to see fossils in this quarry is to look at the eroded boulders lying around on the quarry floor. Some are in pebble-sized rocks. Note that removing fossils, hammering, or collecting fossils is not possible at this site. Only photographing of the fossils is permitted.

The chalk at Houghton Quarry is Totternhoe Stone Member from the Grey Chalk Subgroup (Cenomanian and lower Turonian Stages) of the Upper Cretaceous.

We recommend that hard hats are worn at all times at this location. During the spring and summer, paths may be overgrown and slippery. New safety notices have been put up and the west entrance now has bollards to stop off road motorcyclists, but keep an eye open for any motorcycles that may be present.

You will need a hammer and chisels for this location, although fossils can also be picked by turning over small rocks on the quarry floor.

Since 2011, this site is managed as a Wildlife Reserve, by the The Wildlife Trust for Bedfordshire, Cambridgeshire & Northamptonshire.

Access by fossil collectors is not permitted by the landowner nor the Wildlife Trust as land manager, and any enquiry to visit the SSSI sections should be made to; 01525 874317

Part of this quarry has been designated an SSSI, but does not cover the geological or paleontological elements. The SSSI mainly affects the lake within the quarry.

“Houghton Regis Marl Lakes have developed in a large disused quarry within the Lower Chalk north of Dunstable. The Lakes are an example of habitat type which is the rarest form of standing water in
Britain confined to chalk or limestone areas with very few examples in southern England. ”