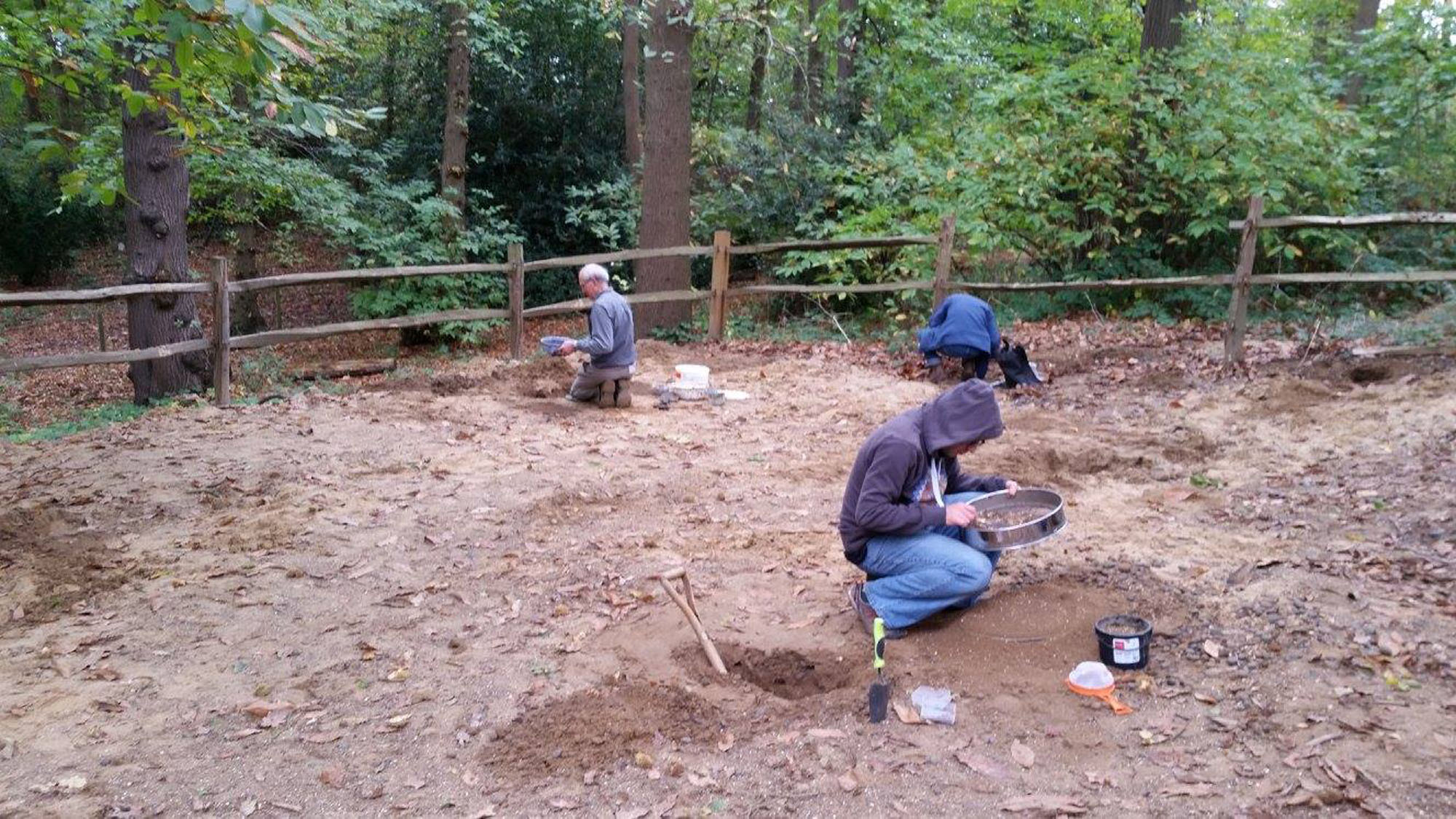 Abbey Wood’s highly fossiliferous shell beds are open to the public for digging, with prior permission. The Eocene beds here are extremely rich in fossil sharks’ teeth, fish, mammal and bird remains, and fossil shells. Fossils are best found by onsite sieving, and is often visited by schools and society organised events.

♦ Abbey Wood is located in southeast London, close to the Woolwich car ferry. The location of the site is near the ruins of Lesnes Abbey.
♦ Park on the roadside along Abbey Road, just next to the woods and ruins, and walk through the opening in the woods.
♦ Nearest railway station is Abbey Wood
♦ Ref: 51.487102, 0.13085961

FIND FREQUENCY: ♦♦♦♦♦ – Abbey Wood is extremely rich in fossil sharks’ teeth along with fish, mammals and many other finds. The site is open to the public, you just need to phone or email to let them know you are planning to visit.
CHILDREN: ♦♦♦♦♦ – Abbey Wood is suitable for children, as they will be fascinated by the fossils that can be found (in particular, the sharks’ teeth). As the site has no cliffs or rock faces, it is a perfect safe site for school visits.
ACCESS: ♦♦♦♦♦ – It is very easy to find, with nearby parking at Abbey Wood, making it a very good location for family fossil hunting trips.
TYPE: – Finding fossils at Abbey Wood involves digging and sieving the rich fossil beds which form the ground. The public can dig down to a maximum of 2 feet for health and safety reasons.

Abbey Wood is a site of geological interest set within a south east London park at Lesnes, Abbey Woods in the London Borough of Bexley. It’s famous for the profusion of shark teeth, ﬁsh bones and scales and shells. Also remains of turtle, crocodile, birds and rare small mammal teeth can be found. The public can dig here, with prior permission from the Lesnes Abbey ranger.

This is a very important location and therefore all major finds are required to be handed to the local museum for research. The most common finds are sharks’ teeth, hundreds of which can be found in one trip and often 20 or more can be found in every bucket sieved. Mammal and bird remains can also be found.

In 1999, the largest number of mammalian finds in one single excavation surprised many who felt the bed was beginning to thin out. In fact, it was in this bed that nine mammal teeth were found, from Sparnacomys, Paramys pourcyensis and, possibly, Pseudoparamys. An upper left P4 and an M2 of Wyonycteris were also found.

The beds were laid down approximately 54.5 Mya (early Ypresian Stage) in a shallow tropical sea and contain a mixture of marine and estuarine, as well as freshwater fossils. The site is late Palaeocene and early Eocene and comprise of the Lesnes Shell bed of the Blackheath Member. They are overlain by massive pebble beds, with disturbed bedding grading into pebbly soil layers, and underlain by the Buff Sand, containing scattered shells and pebbles, under which is another pebble bed can be found. The Blackheath Member rests on strata ranging from the lower part of the Upnor Formation,. There are also outcrops from the Lower Cretaceous Chalk Group present in the woods.

Common sense should always be used when fossil collecting at all locations. Do not dig lower than 2 foot  and ensure you fill any holes before you leave.

You will need (at the very least) a 0.5mm mesh sieve, a large container, large bags for taking back samples and a bucket for collecting material. A small pair of tweezers will also come in handy. Fossils should be placed into containers. We recommend that you take a basin, which can be filled with water provided onsite and also two-grades of sieves.

The Abbey Wood site gives permission for visits via the Parks & Open Spaces department at Bexleyheath Civic Offices. There are conditions to collecting here and these should be observed by all.
1) You may remove no more than 2 kgs of material from the site.
2) Please do not dig more than 2 feet
3) Please refill any large or deep holes
3) Groups need special permission from the email below;