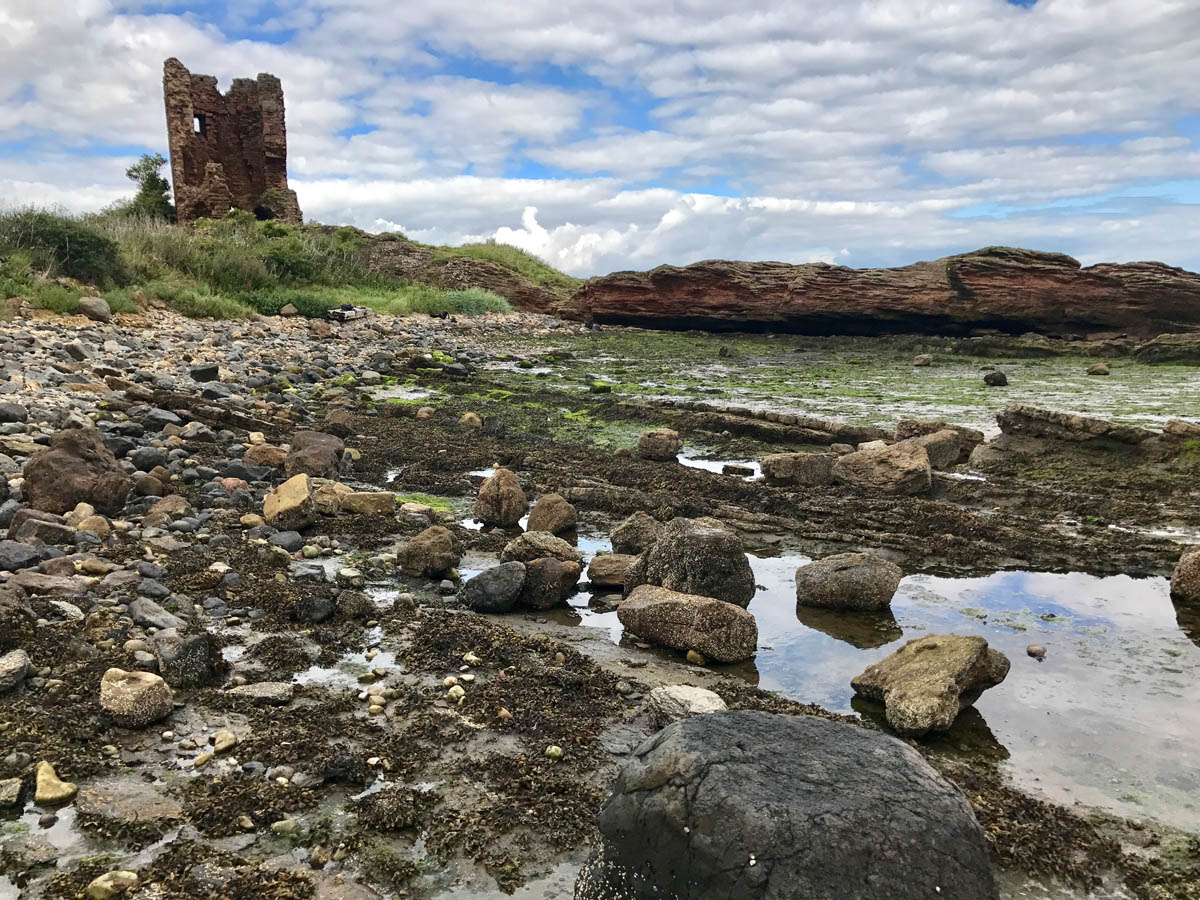 To the south of Seafield Tower, which is a sixteenth century castle ruin built of local red sandstone, is a highly fossiliferous section of Carboniferous Limestone. The limestone is packed with beautifully preserved crinoids, bryozoans, corals, shells and, if you are lucky, sharks’ teeth. These are exposed on the foreshore platforms.

♦ Between Kinghorn and Kirkcaldy are the remains of Seafield Tower. The parking area is situated at the most southern end of Kilkcaldy.
♦ Follow the A921 from Kinghorn until the junction with the B9157. This is just before a Morrisons supermarket. Take the Seafield Road until you reach the car park, which is to the southeast of the Morrisons.
♦ From the car park, walk south, following the coastal footpath until you reach the tower.
♦ The foreshore at the north side of the tower is Old Red Sandstone, but the south side marks a change to Carboniferous and the small bay just past the tower has a variety of formations all highly rich in fossils.

FIND FREQUENCY: ♦♦♦♦♦ – For Carboniferous Limestone, this is one of the best locations in the UK. The small bay contains rocks that are highly fossiliferous with beautifully preserved fossils. What makes this location even more special is the fact that the rocks are much softer than at other limestone sites, making collecting a lot easier.
CHILDREN: ♦♦♦ – This location is suitable for older children, due to the distance and the large rocks that have to be climbed down from the embankment.
ACCESS: ♦♦♦ – From the main car park, it is a walk of slightly under a one mile, along the coastal path. The walk is easy going, although getting down from the embankment at the tower requires climbing down some large rocks, which can be difficult for some people.
TYPE: – Fossils are found in the foreshore exposures of Carboniferous Limestone. The limestone is fairly soft and so is easy to break open. However, excellent weathered fossils are easier to spot on the surface.

This is only a small bay, with a limited area to collect from, but the rocks here are packed with fossils. You will notice next to the tower and to the north that the Old Red Sandstone outcrops. This is unfossiliferous, but you will also see that the tower is made from the same stone.

Immediately to the south, the geology marks a dramatic change to Carboniferous. The foreshore strata run from oldest to the north and youngest to the south. The layers separating formations and beds can be seen in the strata on the foreshore, with bands full of corals, crinoids and shells. A the middle part of the bay, with softer limestone, yields a variety of marine fossils, including very well-preserved crinoids, bryozoans, corals, shells and, if you are lucky, sharks’ teeth. One particular shark type, Ctenopetalus serratus – (a petalodont) – can be found here.

There is also a lot of loose material to look through, and coral and crinoid pebbles can be found all over the bay.

The coast from Seafield Tower towards Kinghorn is composed of sediments from the Lower Limestone Formation of the Clackmannan group of rocks. These were formed approximately 322 to 331mya during the Namurian Stage (Pendleian Substage) of the Silesian (Upper Carboniferous). The rocks overlie the Hurlet Limestone, which crop out nearer to Kinghorn.

The Lower Limestone Formation formed in marginal coastal plains with lakes and swamps inundated by the sea, so fossils are of a marine origin.

Common sense when collecting at all locations should always be used and knowledge of tide times taken into account. The sea does reach the cliffs at high tide, so collecting should be done on a falling tide. Care must also be taken getting down from the embankment, as the rocks are big, slippery and will be dangerous in wet weather.

You will need a chisel hammer and safety glasses, as the fossils are found in the limestone foreshore platforms. A chisel also comes in very handy. The limestone is fairly soft, so take paper to wrap the most fragile finds and something to put them in.