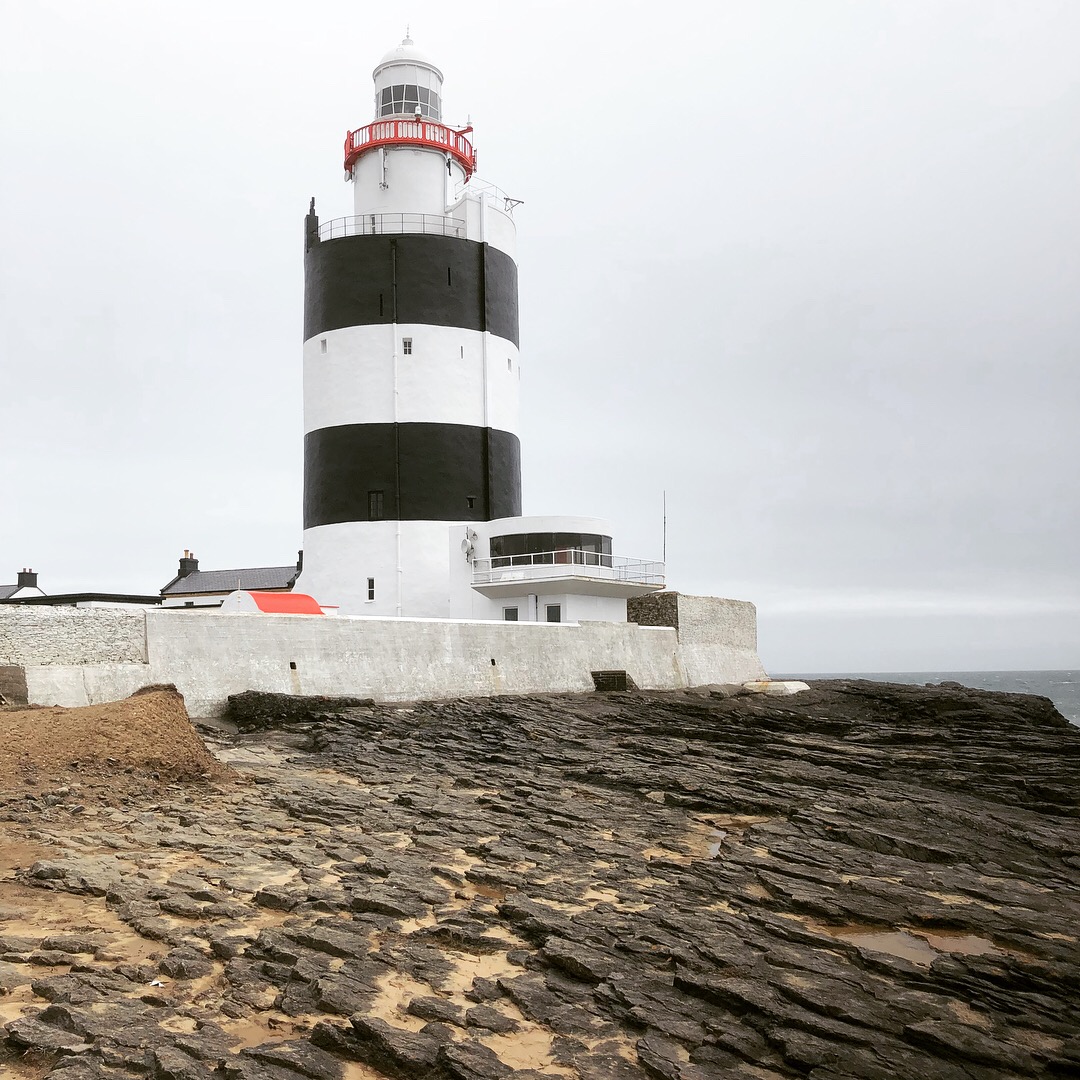 Southeast of Waterford and southwest of Wexford is the Hook Head peninsula, which is remarkable for the abundant, beautifully preserved Carboniferous fossils, at its furthest reach by the Hook Lighthouse. The outcrops around Hook Head consist of abundant exposures of Lower Carboniferous rocks in foreshore platforms, containing beautifully preserved crinoids, bryozoans, bivalves, corals and brachiopods. The cliffs and platforms are protected, but many loose fragments can be found containing significant numbers of jumbled fossils of all types, with superbly preserved detail.

♦ Access is at various points along Coast Road by sets of steps.
♦ Take R733 and L4045 to Hook Head Road and follow Hook Head Road until you reach the Hook Lighthouse. This is clearly signposted and is well worth a visit, being over 800 years old and is the world’s oldest operational lighthouse. There are toilets and a cafe at the lighthouse, as well as a small museum/visitor centre, and there is ample free parking (you only need to pay for the tours of the lighthouse).
♦ If you exit the car park by the road exit, the rock platforms are accessible to the left and right of the car park exit, running as the lighthouse and left for many metres. Further along the road, heading away from the lighthouse, there is a small cove where sea-polished pebbles containing fossils can be found.
♦ You can get onto the beach and foreshore platforms using the steps at various points along the coastal path. There are occasional cliff paths, but they are unmarked, unmade and sometimes unsafe. We do not advise their use.
♦ NT 27940 8847955, 52°12’34.51″N 6°92’96.08″W

FIND FREQUENCY: ♦♦♦♦♦ – This is one of the best locations in Ireland to see excellently preserved Carboniferous limestone fossils in situ. The exposed platforms are highly fossiliferous and contain vast quantities of fenestral bryozoans, crinoids, brachiopods, bivalves and corals. Hammering is not permitted, but highly fossiliferous, loose fragments of shale and sea-rolled pebbles can easily be found on the beach and foreshore platforms.
CHILDREN: ♦♦ – This location is only suitable for older children, as the foreshore platforms can be uneven and slippery and there are frequent blow-holes along this stretch of coast. Care should be taken to stay well away from the sea, as strong waves can easily wash over the platforms and catch you unawares.
ACCESS: ♦♦♦ – From the car parking spaces at Hook Lighthouse, it is a short walk to the exposed platforms, which can easily be stepped down to from the edge of the grass. The beach consists of rocky foreshore platforms with sandy shingle in between and can be uneven and slippery. The area is very exposed and the sea is dangerous, so be sure to keep well away from the water’s edge.
TYPE: – Fossils are found in the foreshore exposures of Carboniferous limestone. Excellent weathered fossils are easy to spot on the surface. Fossils are also found loose in fragmented shale and in the pebbles on the beach.

There are many well-preserved fossils to see and enjoy in the foreshore exposures. However, collecting should be limited to loose fossils available on the beach.

The rock forming the coast around Hook Head was formed approximately 348mya during the Courceyan Substage (Tournaisian Stage) of the Dinantian (Lower Carboniferous).

On the southwestern end of Hook Head, adjacent to the lighthouse, the Lower Carboniferous shelf slope carbonates are largely formed of highly bioturbated packstones to wackestones, coated in bryozoans, along with abundant remains of crinoids and echinoids (sea urchins). Corals and brachiopods are also common.

About a Kilometre from the lighthouse, on the west side of Hook Head, dolomites can be seen.

The Carboniferous Porter’s Gate Formation comprises sandstones; cross-bedded sands, shales and carbonates. Some of these carbonates are fossiliferous mudstones.

Common sense when collecting at all locations should always be used and knowledge of tide times is essential. The sea does reach the cliffs at high tide, so collecting should be done on a falling tide. Care must also be taken getting down from the embankment, as the steps may be slippery or dangerous in wet weather. There are occasional cliff paths, but they are unmarked, unmade and sometimes unsafe. We recommend that they are avoided.

No equipment is necessary for this location, other than a bag or container to hold your finds from the foreshore. The site is site of special scientific interest (SSSI), so hammering is not permitted and only loose fossils may be collected. You may wish to take a chisel hammer to split larger loose rocks, but you may not hammer the bedrock as it is protected.

This site is an area of scientific interest (ASSI). This means you can visit the site, but hammering the bedrock is not permitted. For full information about the reasons for the status of the site and restrictions contact The Department of Agriculture, Environment and Rural Affairs.